Taking a Chance on Chances 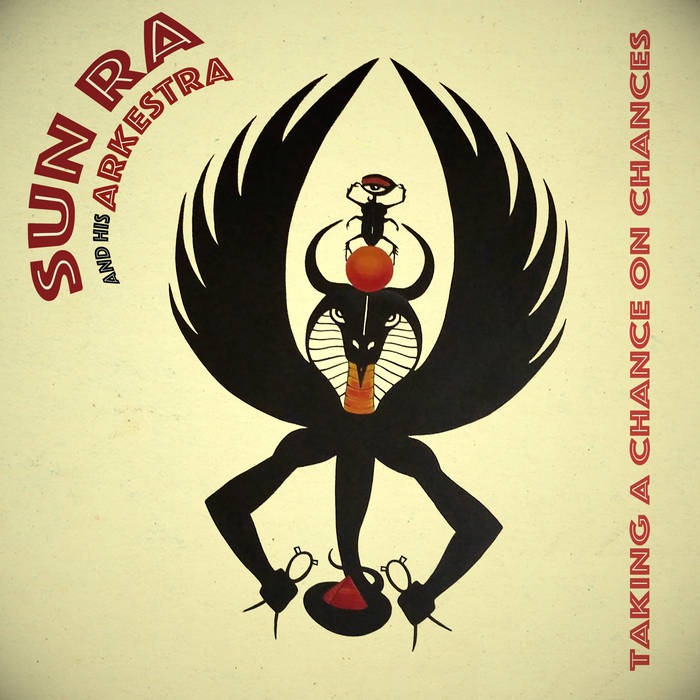 This is not The Great Lost Sun Ra Album. It's a GOOD Lost Sun Ra Album, and it's been more or less found. Taking a Chance on Chances (or "… on Chancey," as some typographically allege) was recorded at the Jazz Showcase, Chicago, in 1977, and issued on Saturn vinyl in 1977 (catalog #772). Only one problem: according to the authoritative Earthly Recordings of Sun Ra, by Robert L. Campbell and Christopher Trent (2nd ed., 2000), "all known copies of Saturn LP 772 have a defective pressing on Side A."

Taking a Chance was a companion volume to The Soul Vibrations of Man (Saturn 771), issued around the same time. The two albums share comparable origins, personnel, and dollar-store acoustics. Soul Vibrations can be found here: sunramusic.bandcamp.com/album/the-soul-vibrations-of-man

Both emerged from the Alton Abraham–Chicago division of Saturn, an operation that in Ra's omniverse was slowly approaching its sell-by date. Soul Vibrations was issued with a lavishly illustrated front cover; Taking a Chance was sent to market with various covers ranging from a grainy, underlit black & white photo of Ra crowned in Egyptian headdress, to generic sleeves festooned with taped-on strips of paper bearing the title and a small inset photo. Taking a Chance was apparently a very limited press run, perhaps as few as one or two hundred copies, and very few are known to exist.

As for the manufacturing flaws in Taking a Chance, here's a description by blogger Rodger Coleman: "The pressing defect manifests itself in a woefully unbalanced stereo presentation and a near-constant overlay of scratchy noises and horrifically ugly distortion which only begins to clear up towards the end of the side. Ugh. Pressing the mono button helps a little (if you have one) but not much. As listeners to Soul Vibrations already know, these are not great-sounding recordings to begin with; the pressing flaw renders them almost unlistenable."

We can attest, having borrowed a sealed Saturn original from our friend Freddie Patterson, who allowed us to slit the shrinkwrap and drop a stylus in the LP's virgin grooves. Hoping to discover the world's only sonically pristine copy for a premiere reissue, we were disappointed to hear on Side A the "horrifically ugly distortion" described by Coleman. (Someone suggested we issue it that way for its "exotic mix." We demurred.)

Fortunately, Michael D. Anderson of the Sun Ra Music Archive unearthed a tape in 2016 that proved to be the closest thing to a "pristine" version. It's got problems, sure, but compared to the Saturn pressing, it's Rudy Van Gelder-grade. For the first time, we can hear what Side A was intended to sound like. The recordings capture some incidental noise (beyond applause) from patrons, but these artifacts convey an intimate club atmosphere and are not intrusive.

The first three titles on this digital reissue originally appeared on Side A of the LP. Some notes:

"Taking a Chance on Chances" (6:27, stereo)
There's some conjecture about the title of the album, and about this alleged "title track," which may or may not involve Ra wordplay on the name of the band's French horn player, Vincent Chancey. Campbell/Trent: "According to Chancey, the first title on Saturn LP 772 was supposed to be 'Taking a Chance on Chancey,' which makes eminent sense: the piece is an improvised Ra/Chancey duet" for organ and French horn.

"Lady Bird"/"Half Nelson" Medley (8:32, stereo)
"Lady Bird" is a vintage Tadd Dameron chestnut, "Half Nelson" a Miles Davis classic. Inexplicably, the SRMA tape contains a different take than the LP version. It's a half-minute shorter, but it's the same arrangement, the solos are comparable, the instrumentation and personnel sound identical, and it was likely recorded at the same venue during the same booking, perhaps even on the same date during a different set. The trumpet solo on the unlistenable LP version is over a minute and a half longer; Gilmore's masterful sax solos clock three minutes on both LP and tape. The mix is off on the ensemble passages, the horns somewhat buried beneath Ra's dominant Yamaha YC-30 Combo Organ, which remains dense even during the horn solos, but the powerful performances shine through. As ad hoc Ra live recordings go, this is worse than a few, but better than most.

"Over the Rainbow" (5:21, mono)
Ra switches to piano for what is essentially a rollicking solo, with a bit of restrained trap accompaniment from either Tommy Hunter or Luqman Ali (both of whom are cited as having been on the gig).

On the original pressings of Saturn 772, side B was the GOOD side. Ironically, with the sonic upgrades to side A, Side B is here downgraded to a raucous clatter. The inferior audio isn't a pressing flaw; it's attributable to a woeful recording set-up at the club. Distortion, limited frequency spectrum, ad hoc mic placement, and ambient noise combine to produce one of those lo-fi captures with which any deep Sun Ra fan is familiar, and which generally appeals only to the most faithful of those fans. That said, the recordings are not without charm and archival significance.

"St. Louis Blues" (5:09, mono)
Still on piano accompanied by drums, Ra has Richard Williams on bass rounding out this trio rendition of the W.C. Handy relic (with a quick nod to Gershwin at 4:43). The tracks are identical on tape and LP, but the latter sounds terrible—the speed and pitch are off, and the mastering is egregious. The tape was excellent by comparison (a relative standard); it's on-pitch, faster, and offers greater clarity.

"What's New" (10:09, mono)
This tune was a hit for Bing Crosby in 1939, and performances and recordings dot the Ra discography spanning 1962 to 1991. It's evident why Sunny felt compelled to issue this badly recorded performance—the smoking, extended tenor solo by John Gilmore, who is turned loose for five breathtaking minutes. The final minute and a half constitute a literal solo, as Ark and leader step aside while Gilmore dives into the vortex. The band then returns for an Ahmed Abdullah trumpet solo, which, following Gilmore's masterful tapestry, sounds like an afterthought.

"Take the 'A' Train" (9:51, mono)
See "What's New." Another audio snapshot with dust, wrinkles, discoloration and worn edges. But once again, Gilmore redeems.

A bonus track has been added:

"The Sound Mirror" (9:03, stereo)
This is a previously unissued recording. A regrettably lo-fi 14-minute version was issued as the title track on Saturn 19782 in 1978. This performance, believed to date from late 1977 or early 1978, features a tighter arrangement and greater sonic clarity.

"Taking a Chance on Chances" and "The Sound Mirror" by Sun Ra © Enterplanetary Koncepts (BMI)
"Lady Bird" by Tadd Dameron
"Half Nelson" by Miles Davis
"Over the Rainbow" by Harold Arlen and Yip Harburg
"What's New" by Johnny Burke and Bob Haggart
"St. Louis Blues" by W.C. Handy, trad. arr. by Ra
"Take the 'A' Train" by Billy Strayhorn