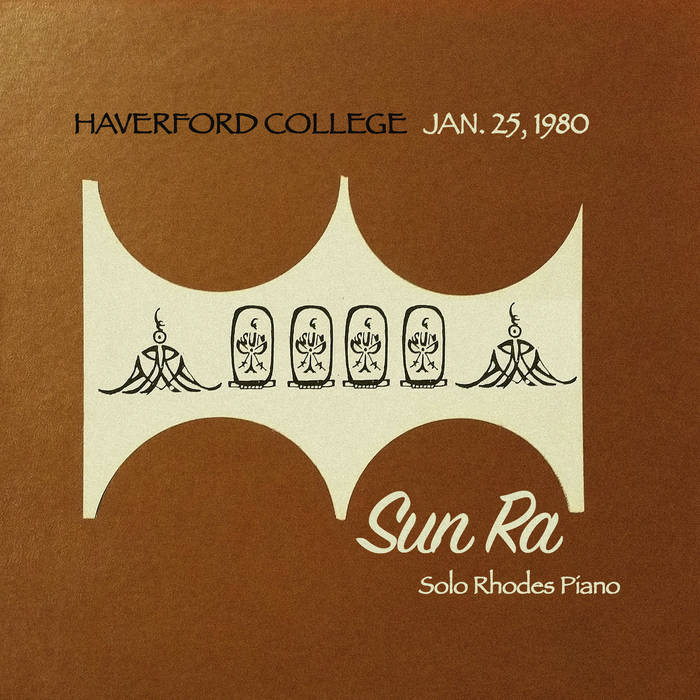 forrest stanley Amazing recording! Captures the tone of space in distilled moments of human spirt as only the great Sun Ra could. An intimate window into the world of a true visionary.

This Sun Ra 1980 solo set has been kicking around the internet and in the digital libraries of Ra collectors for years. It has not previously been commercially released, nor has there been any (known) diligent attempt to upgrade the fidelity. We've taken action on both counts.

This is a very unique performance. Sun Ra is notorious for his aggressive keyboard attack and seemingly schizophrenic stylings—which can musically go from A to Z and back to A without transitional bridges. This set offers a marked contrast. Ra's instrument of choice here is the celeste-like Fender Rhodes electric piano, which has a distinct sound (instantly recognizable in the Doors' "Riders on the Storm") and an interesting history. There are few pyrotechnics in this performance, and much restraint. Ra sounds relaxed and contemplative. It's Soothing Sounds for Saturnians.

The lovely recurring melody of "Haverford Impromptu #1" sounds familiar—and sounds composed—but we could not conclusively identify it. We asked Ra discographer Christopher Trent if he could ID the work, and he observed: "That’s a composition, not improvised. I don’t think it’s been released in any form. Ra would invent new tunes at his keyboard, and sometimes develop them into finished pieces for the Arkestra. Other works never became thoroughly developed, and being prone to spontaneity, Ra might perform them at unexpected moments. There’s footage of him rehearsing like this in the film 'A Joyful Noise.' There are quite a few keyboard compositions which he recorded only once, and which—like this—do not sound improvised. 'Monorails and Satellites' and 'The Adventures of Bugs Hunter' come to mind."

Despite the "Fender Rhodes" name, the keyboard was not invented by Fender. It was developed in the 1940s by Harold Rhodes, who licensed the product to Fender in 1959. Fender modified the design, added their trademark name, and undertook the marketing campaign that made this piano iconic, particularly during the 1970s. Fender produced 73- and 88-key models.

Although considered an "electric piano," the Rhodes is actually an acoustic instrument with amplification. Unlike many "electronic" keyboards, the Rhodes has no digital components; it has internal hardware (metal tines, in place of conventional strings) that can produce sounds even when the device is turned off. Electrical current activates pickups which amplify the hammer action. The resultant sound is less resonant than a piano, and more of a bell-like chime.

The 1969 Fender Rhodes was sold with an attached “suitcase” stereo amplifier (on which the keyboard sat) designed to create unique panning and reverb effects. Esquivel loved this instrument and featured it on his final two RCA Victor albums. Several classic late 1960s/early 1970s Miles Davis albums are awash in Rhodes, played by Herbie Hancock, Chick Corea, and Joe Zawinul. The amp-less Stage Model (1970) could be used with any external amplifier, and was often paired with the Fender Twin (or Quad!) Reverb guitar amp.

In 1975 Fender removed their name from the device for marketing reasons, but continued to manufacture modified models.

The stereo recording of the Haverford show which has been in circulation among collectors was slightly (and unpredictably) out of phase; these issues have largely been rectified. Non-performance artifacts and audience applause have been minimized. Someone with a bad cough punctuated a number of passages; we have gone to meticulous lengths to suppress his intrusive hacking.

Ra's old friend (and sometimes collaborator) Walt Dickerson was on the bill, performing a 25-minute solo vibraphone improvisation. That track has been digitally refined and is available ONLY on the Bandcamp edition of Haverford 1980. We did not remove the coughing (and sneezing) from the audience, whose health had apparently worsened between sets. It was January—flu season.

1/3/20: Reviewed by Hank Shteamer at RollingStone.com:
bit.ly/36pT2eQ
"There’s an offhanded charm to the set that gradually draws you in, almost as though you’re listening to one of the 20th century’s greatest musical minds play stream-of-consciousness cocktail piano, casually joining up beloved standards with heady, extraterrestrially inspired originals."

Thanks to John Szwed, Christopher Trent, and Brother Cleve