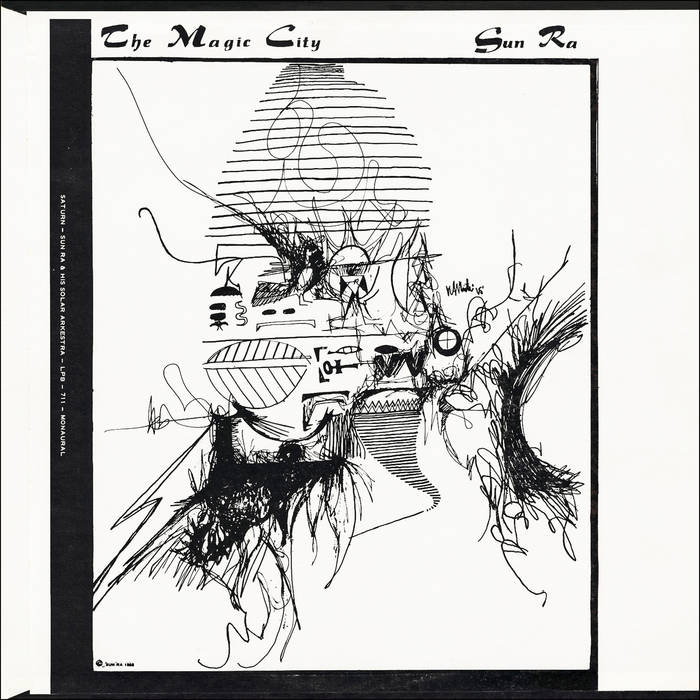 spbetr It's a great work! This men really translate signals of the space Favorite track: The Shadow World.

symphronik This is the Arkestra at the hight of its power. Terrific performances all around.

"For me, The Magic City is about the most important recording Sun Ra ever released: so many unprecedented ideas unveiled in one album." – Christopher Trent, co-author, Earthly Recordings of Sun Ra

"If any one piece was intended to be Sun Ra's monument, it is The Magic City." – Robert L. Campbell, co-author, Earthly Recordings of Sun Ra

"With supplemental material from the original tapes, the best possible sound and detailed research, this could be the single-disc reissue of the year." — NYC Jazz Record, Oct. 2017

Sun Ra albums like THE MAGIC CITY prove the categorical futility of "File Under: Jazz." When assessing the post-Chicago (1960–on) work of Ra, "jazz" turns out to be less a genre than a journalistic and marketing convenience. Jazz has a glorious tradition. Sun Ra was schooled in it, emerged from it, and grew to transcend it (though he never abandoned it). Even the cheeky term "Space Jazz" cannot frame the extremes to which Ra pushed his art in the mid-1960s. In this regard, THE MAGIC CITY was a pinnacle.

1965 was a turbulent year for the Arkestra and its leader, and many consider THE MAGIC CITY a flashpoint for that upheaval. Arkestra drummer Tommy Hunter, quoted in John Szwed's 1997 Ra bio SPACE IS THE PLACE, describes a typical performance of the period: "It was like a fire storm coming off the bandstand."

On the original 1965 THE MAGIC CITY LP, issued on Saturn, the monster 27-1/2 minute title track sprawled across side A. The "Magic City" to which Ra refers was his birthplace—Birmingham, Alabama. The term was the town's motto, emblazoned on a billboard by the train station near Sunny's childhood home, intended to reflect the city's explosive growth as a Southern industrial epicenter after the discovery of iron ore, coal, and limestone deposits. Birmingham was a place about which Sun Ra felt and expressed ambivalence: an outpost of racial segregation and grim smokestack-pocked landscapes, yet a city for which he felt twinges of nostalgia and affection. (His heirs still live in the area.)

Ra customarily supervised the Arkestra's improvisational process via keyboard cues or hand signals. He was always in charge—hence critic Simon Adams describing the title track as "27 minutes of controlled freedom." "The Magic City" was never performed in concert; saxophonist John Gilmore said it was "unreproducible, a tapestry of sound."

Although shorter in scope than side A's magnum opus, the four works on THE MAGIC CITY's flip side reflect the same improvisational approach, spatiality, and lack of structure. One session outtake, "Other Worlds," an alternate version of "Shadow World," is included as a bonus track. Also included are the final 90 seconds of the mono version, which were curiosity omitted from Ra's own stereo version.

The LP and CD editions include liner notes by Sun Ra scholar Christopher Trent, along with a complete roster of musicians who performed on each track. Historical and technical liner notes are provided by noted jazz historian Ben Young, who restored and remastered the album with his Triple Point Records partner Joe Lizzi. Both men have been recognized for their production work on HOLY GHOST, the Grammy-nominated ALBERT AYLER boxed set released on John Fahey’s Revenant Records in 2005.

First-generation Saturn pressings of The Magic City were monophonic. The album was reissued on CD by Evidence in 1993 with the title track in mono and the LP side B tracks in stereo. A full stereo version had been issued on Sun Ra's Thoth subsidiary label sometime after 1969; however, it suffered from a technical flaw that prevented many copies of the LP from tracking cleanly through the first cut on side B. A 1973 gatefold LP reissue on Impulse featured reprocessed stereo, and a cheap, terrible-sounding bootleg LP—on a badly replicated "Saturn" label—has circulated in recent years. For this definitive reissue, Cosmic Myth Records used stereo sources which are superior to the Thoth pressing.