The Ankh and the Ark

by Sun Ra and Henry Dumas 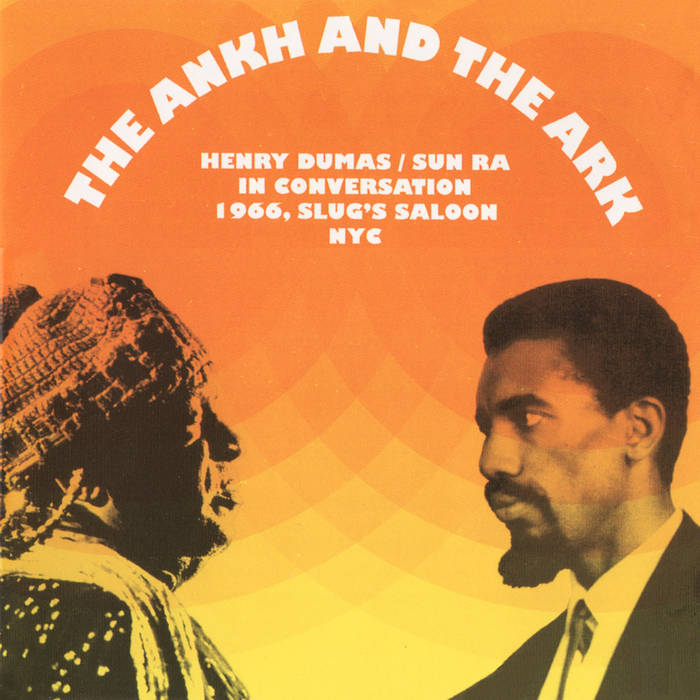 code_poet Because it includes two poets speaking their minds.

This interview was discovered among a collection of tapes made by the late poet, storyteller, activist, and playwright Henry Dumas, whose work has been labeled "genius" and "brilliant" by Amiri Baraka, Toni Morrison and Clyde Taylor. Although no clear date or location is specified, it is likely that the dialogues were recorded at the legendary lower east side club Slug's in l966 when both Dumas and Sun Ra resided in the New York area. As was perhaps all too common, then as now, the tapes comprised an audio notebook that spanned several years and were continually recycled and put to new use in Dumas's quest to document the vibrant and shifting life around him. Hence, only a portion of the original interview survives.

What is clear, however, is that this document, in any form, provides a crucial insight into a brief but tight bond between Dumas and Sun Ra, a bond which came to an abrupt end in a Harlem subway on May 23, l968 when Dumas was shot to death by a New York City transit cop. The two men were very close and Sun Ra waxed alternately angry and depressed when he received the news of his protégé's death. Members of what Toni Morrison would call the "cult" of Henry Dumas, too numerous to mention here, worked to achieve posthumous publication and acknowledgement of Dumas's writings, an event which greatly pleased Sun Ra. Among Dumas's magical and visionary writings is the epic fable, "The Metagenesis of Sun Re" which appeared in Drum Voices Review in l992. IKEF is grateful to Loretta Dumas for allowing us to make this document available to the public.

Crow
An Interview With Sun Ra
by Henry Dumas

A musician with a great message of spiritual rehabilitation and wisdom is tirelessly working among Afro-Americans. His music has begun to spread around the world. He is creating, teaching, and restoring the vital elements in jazz which make it one of the black man's spiritual heirlooms. For the last twelve years he has been composing and playing a kind of music so different from traditional jazz (yet growing out of it) that it has been called the New Music. Blending Dixieland (the yesterday) with swing and bop (the today), this new music moves with lyric force into the sounds of the future. His name: Sun Ra.

Playing regularly Monday night sessions at Slug's in the East Village, Sun Ra is moving into what he calls Infinity. There are many questions surrounding the New Music's thrust into the world of jazz. As many questions as there are about the music, there are just as many about its progenitor. Aside from the fact that the nucleus of the Arkestra sprung out of Chicago, and that Sun Ra played piano for Fletcher Henderson, little is known about him, except that he did attend a southern college.

There are not many understanding or even tolerant critics of the New Music. For the most part, music tends to forge ahead of its critical milieu-not only of its often infantile critics, but of its listeners as well. LeRoi Jones has long recognized that Sun Ra is a genius. During his days with the Black Arts he worked closely with Sun Ra. Out of that association came, among many things, a play, Black Mass.

Larry Neal, poet and playwright, and John Sinclair, Detroit poet and critic, both have written and spoken of Sun Ra's position in the New Music. Tom Fiofori, Nigerian critic, in the summer 1967 issue of Arts Magazine, writes that this music is so complete in its awareness of and references to the American Negro experience that it corresponds "to all the 'schools' of the area of Negro musical heritage called jazz-going beyond the mainstream, past the New Wave and any other contemporary music played in America into a functional music that cultivates the sense of wonder, accustoms the mind to symbolic language and restores 'myth' as an important and permanent part of culture."

Inseparable from Sun Ra's music is his mythology, a sol-based cosmology that stretches deep into the secrets of the ancient Egyptians. l asked him once about his role of Ra, the Egyptian sun god.

"Everybody should try to be what they really are. They should search and find what they really are. That is what I really am. Some people are in the role of a diplomat or a congressman. I am in the role of Ra. To be what I really am, I must be on another plane of existence. On this stage of existence I am nothing. But on another I am in the role of Ra. It's just like when you go to the theater and you look at a beautiful stage. It doesn't stay that way. Pretty soon the next act brings you some different scenery."

I asked him about Astro-Infinity music which he plays in the new Arkestra. "Is this a way of relating jazz to the atomic age and the future?"

"Astro-Infinity music is just one aspect of my music. It is heavenly, eternal, no beginning and no ending The highest aspiration for many on earth is freedom. Astro-Infinity music is beyond freedom. It is precision, discipline. It is not just freedom. It is coordination and sound interdependence. It is the design of another world. It has nothing to do with the traditions of yesterday, today or the future."

"What would you consider some of the possibilities of jazz in the future? I mean, considering the black man as the originator of jazz, considering the social revolution going on today and his attempts to resurrect some image of dignity for himself, where does jazz get into the picture?"

"Well, you have to go back to some beginnings to talk about that. For one thing, the Creator gave the black man harmony in the beginning. And he tried to discipline the black man to use his gifts, but the black man was too unruly. Even the Creator couldn't handle him, or at least he decided against it. So, l guess the Creator turned the job over to me. But the black man has been worshipping death instead of trying to understand the ways of his Creator. Yet he won't make death his king. The equation doesn't balance. In religion, he believes in the cross, which is an X. When you X something, you eliminate it, you axe it. In the same religion the cross is the symbol of |ife. Anybody following the cross winds up dead in the cemetery with an X for his crown."

"Are you talking about the spiritual death spoken of by Christians or the death of the body?"

"Both really. The black man is under the name of death. He carries it around with him. The word negro. It is the same as the word necro. The g and the c are interchangeable according to cosmic mathematics. It is an equation. A negro equals a necro. The sound of one is in the other. In the Greek necro means dead body. Necropolis is a city of the dead. Once you accept the name without checking into things, then you are automatically a citizen of the city."

"lf the citizens of a necropolis are dead, how does one resurrect them? I mean, in the analogy you just made, how are the souls called forth?"

"Mostly through music and myth. But it's not just the black man who is in trouble. You can look in your newspapers and read how the whole planet is in trouble, in need of spiritual awakening. I am painting pictures of another plane of existence, you might say, something so far away that it seems nonexistent or impossible. ln infinite terms anything is possible. Nothing is impossible. People have always been looking for that world where nothing is impossible. A world of happiness, so they claim. But never have they been able to create it. All the great men on this planet have not yet come close to that world. They've tried everything and everybody. But people will have to have new mind-cepts. All the old ways will have to pass away. When people reach the stage when they can use their infinite mind power to concentrate and direct the truth in these cosmic equations I am talking about, then they will be ready for the grand experiment. There will be no more death in the next plane of existence. You might say that I am the bridge to the next plane of existence. When they reach that stage, they will be resurrected."

"What is the next stage and how will music be used?"

"For the black man the first step will be toward discipline. Music is a force of nature. I am a force of nature. I am in the role of Ra because the Creator has left it up to me to give some order and harmony to this planet. Not everyone is in need of it. Many people are well developed spiritually and are growing. But most are not. So a force of nature gets them all. It's just like when it rains, it rains on everything and everybody. You might say that I represent all the forces of nature. People don't all know about this mind-cept, but in the Yoruba culture it is understood. In many parts of Africa this cosmic law is true among the people. If a man or a people reach a certain stage in their growth and development and then they just can't go any further, a force of nature incubates among them. And this force, be it the wind, the sun, rain, lightning, or thunder, whichever is really needed for that particular kind of development, achieves what could not be done A force of nature gets under you and drives you to do what you thought you couldn't. If I am in the role of Ra and I put some heat up under you, then you will move or burn up."

Mastered at Acme Studios, Chicago
Special thanks to Annette Vissing-Jorgenson

DIGITAL REISSUE NOTE: The audio on the CD edition was inexplicably sped-up. We have adjusted the pitch to an approximation of natural speech.