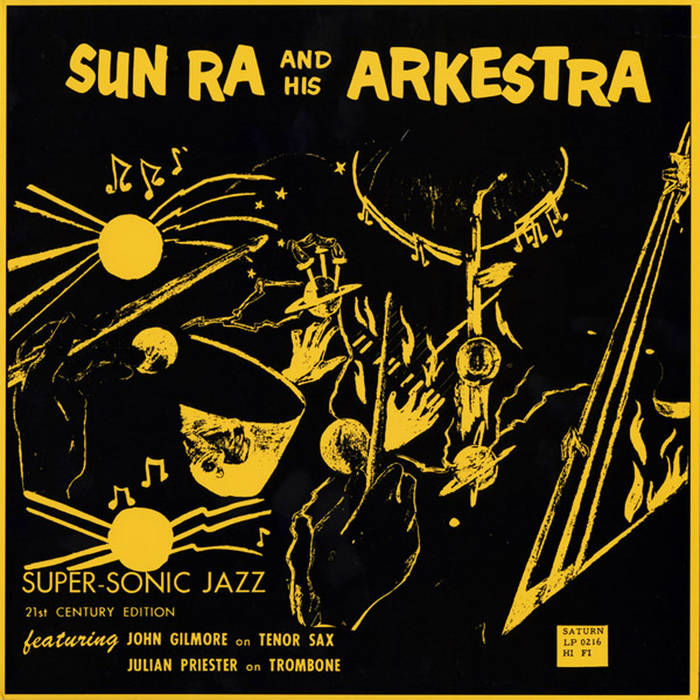 mandr8ke I enjoy both versions of Sunology, but the percussion sounds cleaner/smoother on version 2. Purchased the "El is A Sound of Joy" single, so I had to snag this album, too. Favorite track: Sunology, Pt. 2.

embouchure The Impulse LP of this album, found in a dusty attic in 1975, set me on the path to Sun Ra. This new transfer opens the way to the Cosmos. Favorite track: Kingdom of Not.

Recorded in 1956, but released in 1957, Supersonic Jazz is arguably the first long-playing album by Sun Ra and His Arkestra on his Saturn label. However, it was not recorded as a debut. Rather, the album was assembled from tapes recorded during a number of sessions at two Chicago studios (RCA Victor and Balkan), and several tracks had been released as singles before their inclusion on this album. (Sunny's first fully realized commercial album was 1957's Jazz by Sun Ra, produced by Tom Wilson for the soon-defunct Transition label.)

Before these sessions, Sunny was still arranging for the Red Saunders Orchestra and singer Joe Williams, in addition to arranging for and coaching doo-wop ensembles. As Sunny's ambitions achieved liftoff, the Arkestra coalesced, began building a repertoire (mostly of the leader's originals), and made forays into studios. Deciding it was time for commercial releases, Sunny and business partner Alton Abraham launched Saturn (sometimes called El Saturn) as a record company in 1956.

As a first offering, Supersonic Jazz is a pinnacle Sun Ra release. While reflecting many prevailing bebop, Latin, and R&B conventions of the mid-1950s, it's evident that Sun Ra's musical voice and vision were starting to propel him away from the jazz mainstream. Biographer John Szwed finds on these recordings "characteristics which seemed alien to swing, bebop, or the new, more soulful and hard-edged music which was coming to be called hard bop."

"India," "Sunology," and "Portrait Of The Living Sky" delve into the mystic rhythms of an ancient Egyptian style. Jim Herndon and his tympani add a unique flair to the arrangements alongside other Arkestra members doubling on percussion. There are, in fact, a number of flavors on the album that seek an East-meets-West fusion, a virtual "Ancient Exotica."

Some titles such as "Portrait of the Living Sky" and "Kingdom of Not" appear on Supersonic Jazz and nowhere else; they do not recur in the massive Ra discography of studio, club, and concert recordings.

"Advice To Medics," which sounds like a living room recording, was captured during a 1957 rehearsal with vocalist Clyde Williams (who is not heard on the track). Some Ra scholars have speculated that the recording was reproduced at the wrong speed—recorded at 3¾ IPS, but played back at 7½ IPS. "Blues At Midnight," the first recorded rendition of this timeless Ra standard (a longer version appears on Jazz in Silhouette) allows the band, who were the cream of Chicago’s bebop stalwarts, a chance to stretch out.