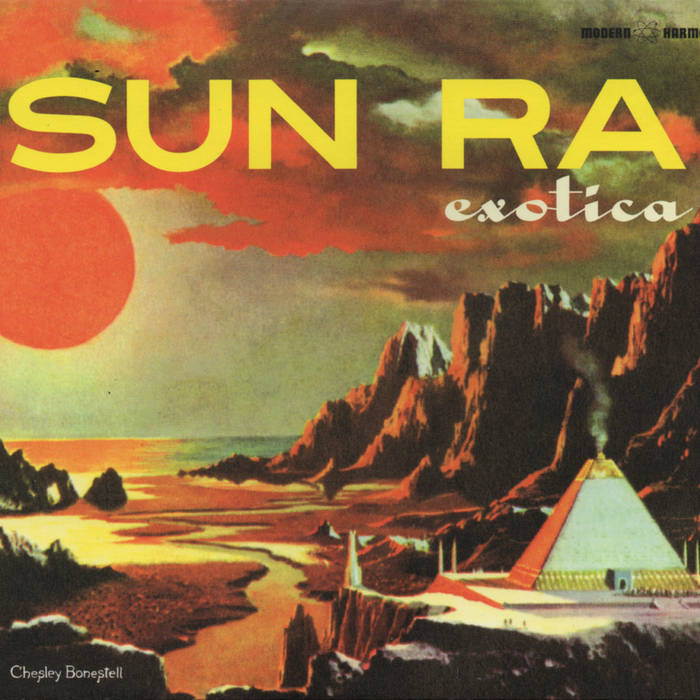 When fans think "Exotica," the names that come to mind are Martin Denny, Arthur Lyman, Les Baxter, Esquivel, and countless others. But Sun Ra?

Here, we offer an illustrative passage from John Szwed's indispensable 1997 Ra biography, Space is the Place. For context, Szwed is chronicling the evolution of Ra's style in the late 1950s, when the budding legend was based in Chicago, leading a midsized ensemble (already dubbed an "Arkestra"), and still working largely in subgenres identifiable as "jazz." Szwed's reflections on Sunny's absorption with Exotica align the Afrofuturist icon with an unlikely musical inspiration:

[quote] "Sunny was listening to the Hollywood-inspired music being made by people like David Rose, whose lush, massed string writing could be heard as theme songs on popular radio programs; or to the exotica of people like Martin Denny, who recorded in Honolulu accompanied by animal noises, natural acoustic delay, and reverberation; and especially to the arrangements of Les Baxter, the premier figure in what was being called mood music.

"Baxter developed a post-swing style in the late forties and early fifties of spectacular orchestral writing, full of timpani and hand drums, tumbling violin lines, harps, flutes, marimbas, celesta, Latin rhythm vamps, the cries of animals, choral moans, and flamboyant singers, creating imaginary soundscapes which he helped evoke with titles like 'Atlantis,' 'Voodoo Dreams,' and 'Pyramid of the Sun.' Sunny first heard Baxter on Perfume Set to Music (1946) and Music Out of the Moon (1947). Baxter went on to produce records which celebrated the Aztecs (The Sacred Idol, 1959), South Asia (Ports of Pleasure, 1957), Africa and the Middle East (Tamboo!, 1955), and the Caribbean (Caribbean Moonlight, 1956), all of which used Latin rhythms generically, as did his two big band records, African Jazz (1958) and Jungle Jazz (1959). Though later generations would understand this music in strictly utilitarian terms, and hear in it the sounds of air conditioning and the clink of ice in cocktail shakers, for Sunny it was music rich with imagination and suggestion. His genius was to take as raw material what others in the 1950s thought of as 'easy listening' and turn it into what in the late 1960s would be heard as 'Third World music' by some and as 'uneasy listening music' by others." [/quote]

Perhaps it's enough to say that Ra and Baxter were both musically omnivorous. However, Baxter, like Sunny, composed music that resisted the Earth's gravitational pull. His 1958 LP Space Escapade contained titles that share a vision with Ra: "Saturday Night on Saturn," "Moonscape," "A Distant Star," "The Other Side of the Moon," and "A Look Back at Earth." His 1947 Music Out of the Moon is arguably the Rosetta Stone of outer space Exotica. Like Sunny, Baxter was an early adopter of the Moog synthesizer—he released the album Moog Rock in 1969, the same year Sunny found himself in Gershon Kingsley's Manhattan studio exploring the circuit-based sounds of the new instrument (featured on tracks he would self-release as My Brother the Wind). And Ra's 1957 debut LP Jazz by Sun Ra included Harry Revel's "Possession," which had first been introduced on Baxter's album Perfume Set to Music.

In a 1996 eulogy for Baxter in Wired magazine, David Toop wrote that "Baxter offered package tours in sound, selling tickets to sedentary tourists who wanted to stroll around some taboo emotions before lunch, view a pagan ceremony, go wild in the sun or conjure a demon, all without leaving home hi-fi comforts in the white suburbs."

Was Exotica kitsch? Did it represent "cultural appropriation"? Was it a dilution of indigenous art? Who cares? Music should be enjoyed on its own terms. The Beatles were heavily influenced by American R&B. Ra borrowed from Gershwin and Stan Kenton. Nigerian juju music was radically altered by the infusion of electric guitars and Western rock. This is how styles develop and evolve. Exotica has roots, but those roots are uncopyable. What emerges is something derivative, yet original. Here you have Sun Ra, of African-American extraction, influenced by Les Baxter, a Caucasian from Texas, who was in turn influenced by primitive jungle rites. It's a cultural feedback loop, best enjoyed by leaving politics out of it.

Herman Poole "Sonny" Blount was born in 1914 in Birmingham, Alabama, where racial discrimination was endemic and historic. Music became his solace. During the late 1940s and 1950s he lived on Chicago's South Side, a black racial enclave. It was a culturally vibrant, if economically downtrodden community. Like many of his neighbors, Ra struggled to earn a living and aspired to move on. However, "travel" takes many forms, not all measured in miles. Paul Youngquist, in a chapter entitled "Interplanetary Exotica," from his 2016 book A Pure Solar World: Sun Ra and the Birth of Afrofuturism, writes: "One of [Sun Ra's] responses to the confinement of blacks, segregated as they were in Chicago's South Side and other such urban spaces […] involved deploying the cultural rhetoric of the Space Age toward the progressive ends of opening up wider vistas, new horizons. If blacks couldn't flourish in segregated cities, then maybe they could follow exotica into space."

Mainstream Exotica's sensuous dreamscapes underscored middle-class post-war optimism, providing rhapsodies for midcentury moderns. Ra knew the despair of the underclass, and created art that was no less escapist. Music could be transcendent; it could transport the listener. The root word "exotic" implies something strange, something unfamiliar, a place that's — anywhere but here. Maybe you can't afford a cruise to Barbados, but a stylus in a cheap microgroove LP could be a ticket to paradise—or the moon—for 20 minutes.

That Ra hasn't been widely celebrated in Exotica circles is understandable. He never made an "Exotica record"; such tracks are mixed in his LPs alongside space jazz, post-bop, electronic freakouts, and sonic experiments. Another reason: the most acclaimed Exotica LPs were "clean." The labels and producers strived for technical perfection. Ra's catalog—indeed his style—is redolent with wrong notes, indifferent mixes, ad hoc mic placement, ill-tuned instruments, distortion, and dollar-store acoustics. Perfectionism? With Sun Ra, it’s all perfectly flawed. But where it lacks sonic purity, it offers something more gratifying: soul.

Ra is not known for cocktail party accompaniment or Tiki bar soundscapes. But here's a few dozen recordings that might suit the mood.

Recordings produced by Sun Ra for Saturn Records, under the business aegis of Alton Abraham
Recorded at various locations in Chicago and New York, 1956–1968

All recordings licensed from Sun Ra LLC
Thanks to Thomas Jenkins, Jr.

Tropical and transportive tunes with guests Coco Maria and Anchorsong.