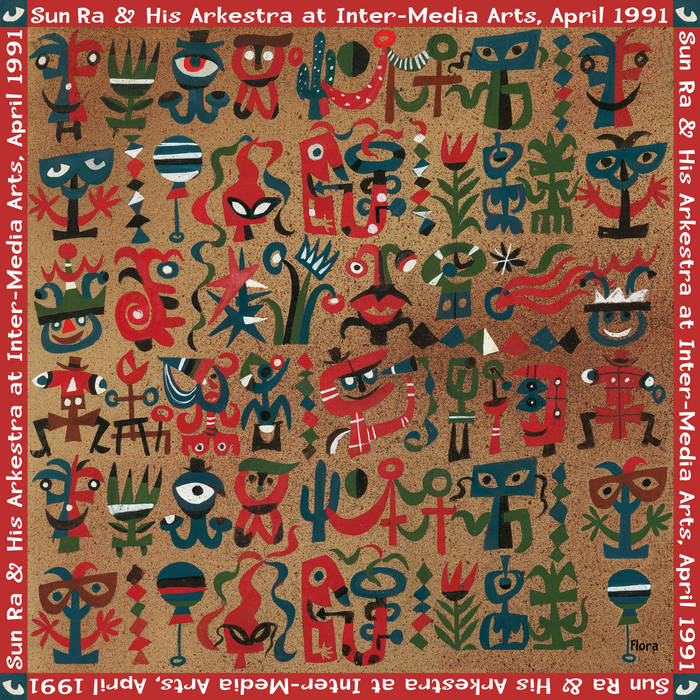 This is a very special recording, commercially released for the first time in 2015 thanks to the graciousness of radio station WNYC, which captured this concert at the Inter-Media Arts Center (IMAC), Huntington, NY, in 1991. Senior WNYC Concert Recording Engineer Ed Haber provides his recollection, as recounted at WNYC.org on May 22, 2014, the 100th anniversary of Sun Ra’s earthly arrival:

"Between 1979 and 1981 I’d regularly go to the Squat Theatre to see Sun Ra and His Arkestra. Located on West 23rd Street in Chelsea, Squat was just below street level, with windows open to the street. It was the perfect venue for Sun Ra, and the Arkestra marching in singing "Space Is the Place" was a sight to behold. Fast-forward ten years when I had the thrill of recording Sun Ra for WNYC at the Inter-Media Arts Center in Huntington, New York. Listening to the tapes now, stripped of the Arkestra's visual theatricality, I’m reminded of how well Sun Ra synthesized so many elements of 20th century jazz, from swing to the avant-garde. But regardless of style, the joy in the music comes through with every note. This concert was just two years before Sun Ra's "earthly departure," yet his piano playing is still so vibrant and really drives the proceedings.

"Convenient, portable multi-track recording equipment was not widely available in 1991, and WNYC’s concert recordings at the time were exclusively direct to two-track mixes. (In fact, this was a digital 2-track recording using the DBX-700 digital audio processor which employed delta modulation rather than the more common PCM to convert the analog signal to digital.) At this concert one of our maintenance engineers, Karen Burdick, sat in the front row and relayed cues as to who was about to solo (we were probably mixing in the lighting booth in the back of the hall), and Michael DeMark (now Technical Director of Minnesota Public Radio's The Current) did a great mix."

This was a precarious period for the Arkestra. Sun Ra had suffered a serious stroke in November 1990, and remained in rehab until early February 1991. During his recovery the Arkestra performed a series of benefits to cover his medical expenses. Ra did not resume performing until late February. Two months later, this concert was staged. Sun Ra does not speak during the show (Michael Ray serves as the band's spokesman), but his piano playing remains idiosyncratic, and the band packs a wallop. This is as close to mainstream as Sun Ra got, yet longtime fans will hear no compromise in the master's style—which had always been more accessible than casual listeners realize.

IMAC, run by Michael Rothbard and Kathie Bodily, was a 600-seat non-profit "carved from the shabby remnants of an Art Deco vaudeville house," wrote the NY Times, who described it as "a quirky, intimate space." Bookings ranged from pop to the avant-garde—"a musical Eden," said one patron. After 26 years, it closed its doors in 2009, due to rising costs, declining public financing and competition from newer performance venues.

Recorded at the Inter-Media Arts Center, Huntington, New York, on April 20, 1991, and broadcast on WNYC on November 9, 1991. This concert was part of a series entitled the New Jazz Network Tour, produced by the New York State Council on the Arts and Hallwalls Contemporary Arts Center of Buffalo.

All titles composed by Sun Ra © Enterplanetary Koncepts (BMI)
except "Hocus Pocus," "Yeah, Man!," "Prelude to a Kiss," "East of the Sun," and "Cocktails for Two" (all copyright control)