Somewhere Over the Rainbow (Beyond Saturn) 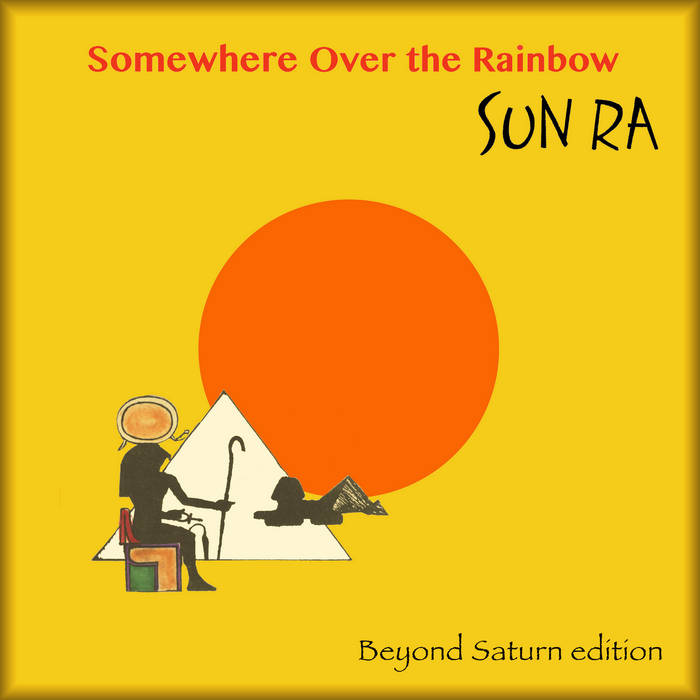 Thelonious_Cube A great mix of "in" and "out" tracks and one contender for best version of the title tune. Favorite track: Outer Reach Intensity-Energy (bonus track).

As live, late-1970s Sun Ra albums go, Somewhere Over the Rainbow is a cut above. It's similar to and contemporaneous with The Soul Vibrations of Man and Taking a Chance on Chances, two live sets also issued on Saturn in 1977 (and available in our remastered digital catalog).

Tape was not available, but we worked from a solidly transferred, clean 1977 Saturn LP (catalog #7877). As with many limited-release Saturn pressings, Somewhere Over the Rainbow offers exciting performances and solos preserved with dollar-store acoustics. Audio restoration can't add what the gear didn't capture—e.g., you can't "remix" the balance of instruments recorded with ad hoc mic placement—but these tracks here benefit from digital cleanup and sonic improvements (including phase correction, an issue with a number of Saturn releases).

This expanded Beyond Saturn edition includes two bonus tracks sourced from a stray tape from the original live 1977 dates. These tracks are not previously unreleased—they were previously and deliberately "misfiled" by the artist. That is, they were included on the A-side of a 1985 Saturn LP whose other content was unrelated.

The original 1977 release alternates four Sun Ra originals with three Tin Pan Alley favorites. It was during the 1970s that Ra began peppering his sets with Big Band-era standards, especially titles originally recorded by his heroes Fletcher Henderson and Duke Ellington. However, "Gone With the Wind," "Over the Rainbow," and "Take the 'A' Train" recur frequently in the career-spanning Ra discography.

Also of interest in this set is "I'll Wait for You," whose throbbing disco pulse prefigures the dance floor stylings pursued by Ra on his later albums Lanquidity, On Jupiter, and Sleeping Beauty.

The performances were recorded at the Bluebird in Bloomington, Indiana. The discographic Earthly Recordings of Sun Ra (by Robert Campbell and Christopher Trent, 2nd ed. 2000) notes: "Michael Weiss says that the Arkestra played two nights at the Bluebird; each night consisted of two 3-hour sets. He recalls that 'the band paraded around playing "Lights on a Satellite" like on the Montreux album'. [Two] dancers were identified from two local newspaper accounts. These articles say there were 18 people in the band, and imply the presence of Pat Patrick and Vincent Chancey, plus a possible third drummer—none of them audible on these tracks. Weiss, however, is sure that Patrick and Chancey were not present."

The two bonus tracks, "Outer Reach Intensity-Energy" and "Cosmos Rendezvous," were first issued by Sun Ra on the 1985 LP known as Stars That Shine Darkly Vol. 2, and alternately called Outer Reach Intensity-Energy. There was no identifying information included with the release—typical of Ra during the 1980s, it was issued in a generic sleeve which may or may not have been adorned with hand-art and no info except track titles on the label. However, Michael D. Anderson of the Sun Ra Music Archive found these tracks on a tape associated with the Bluebird dates.

Comments on Somewhere Over the Rainbow by Bro. Cleve:

"We Live to Be" and "Gone With the Wind" feature Ra on Yamaha YC-30 organ. On both tracks, but particularly on the latter, you can hear how Ra moves around the chord structure and tensions with the organ sustain differently than he would on solo piano. You can also detect Gershwin and Rachmaninoff in his voicings. As these two tracks demonstrate, recording Ra's organ was always a perilous undertaking. He loved to overdrive the combo organs to add distortion. (While amplifiers like the Fender Twin and Dual Showman worked well with transistorized organs, it appeared in one fuzzy photo that he was playing through a Sunn bass amp—one would hope!)

Ra favored the YC-30 in the mid-'70s, especially on albums recorded in 1977. The YC-30 made cool-yet-cheesy sounds—the way Sunny liked 'em. It had a bass octave, a portamento strip that served as a ribbon controller for theremin-style effects and pitch bending, a built-in fuzztone, reverb, and a repeater, which would make notes serially repeat while the key was held down. The YC-30 could be tilted forward to play at an angle; this allowed the audience to see the player's hands and view switch-work. When the Arkestra went to Italy in early 1978, Ra obtained a Crumar Mainman prototype (the instrument was reportedly never sold commercially), which he used into the mid-'80s. Ra liked portable combo organs because they were easy to carry on tour. In the late 1960s he used a Gibson Kalamazoo G-101 (which Zappa used to great effect for weird sounds on Uncle Meat, Burnt Weeny Sandwich, and Weasels Ripped My Flesh). In the early 1970s, particularly when he first toured Egypt, Ra used the Eko Tiger, a compact Italian-built organ, as well as a classic Farfisa. Combined with the equally easy-to-lug Rock-Si-Chord and Minimoog, Ra had quite an electronic keyboard arsenal, all of which were effectively distorted through tube amps.

"I'll Wait for You," as noted above, is Ra's first foray into "funky disco," perhaps his first recording with four-on-the-floor kick drum, which thus foreshadowed the albums Lanquidity and Disco 3000 (both issued in 1978).

SOTR contains a number of swing tracks, which were entering Ra's set-lists with increasing frequency, a pattern that continued to the end of Ra's playing days. He began introducing Big Band standards into live shows around 1973; one of the earliest citations is "King Porter Stomp" played in a "straight" style on Live at the Gibus (1973). Within a few years, the Ark was regularly swinging "Hey Man," "Keep Your Sunny Side Up," "Bye Bye Blackbird," and "Sophisticated Lady," but other than solo piano recordings, few such arrangements made it to LP until 1978's Unity.

When I was with the Del Fuegos, we played The Bluebird. Looking at photos, it was good-sized stage. Ra could have had the piano and organ next to each other per his usual setup. However, there are inconsistencies in the recording perspective. The piano is in the left channel on "Over the Rainbow," but on other tracks it's on the right with the organ. Surely they didn't reposition the piano. On "A Train," the piano is on the right, but starts distant, then gets louder. There's no volume control on a piano, so they must have moved the mics. There are a couple of instances (which can't be fixed) of the mics going in and out on the left channel, probably caused by faulty (and cheap!) equipment set up in makeshift fashion.

Tenor saxophonist John Gilmore sounds great throughout, although not as ferocious as he does on comparable live tracks on 1977's Taking a Chance on Chances.

Voices on this album are typically problematic. On "Make Another Mistake," the band does one of their walk-offs in which they march around the room while chanting. They didn't bring mics onto the floor so the vocals are distant, but the spirit pervades the room. On "I'll Wait For You" it sounds as if they went to the front of the stage for the cosmo-drama, with vocals emanating from upfront house speakers that could not be picked up clearly by mics set up by the drums. Impossible to fix, but the soul is self-evident.

Brother Cleve attended many live Sun Ra performances starting in the 1970s. He has produced recordings by Waitiki and Mr. Ho's Orchestrotica, as well as two volumes of Bombay Disco. He has played keyboards for the Del Fuegos, Barrence Whitfield & the Savages, and Lounge Music revival trendsetters Combustible Edison. Cleve penned liner notes for Sun Ra Exotica (Modern Harmonic, 2017), and co-mixed (with Sean Slade) the forthcoming premiere release of 1986 Boston recordings made by Sun Ra & the Arkestra in conjunction with Bill Sebastian's OVC project.