by Sun Ra & His Arkestra with Chamber Orchestra 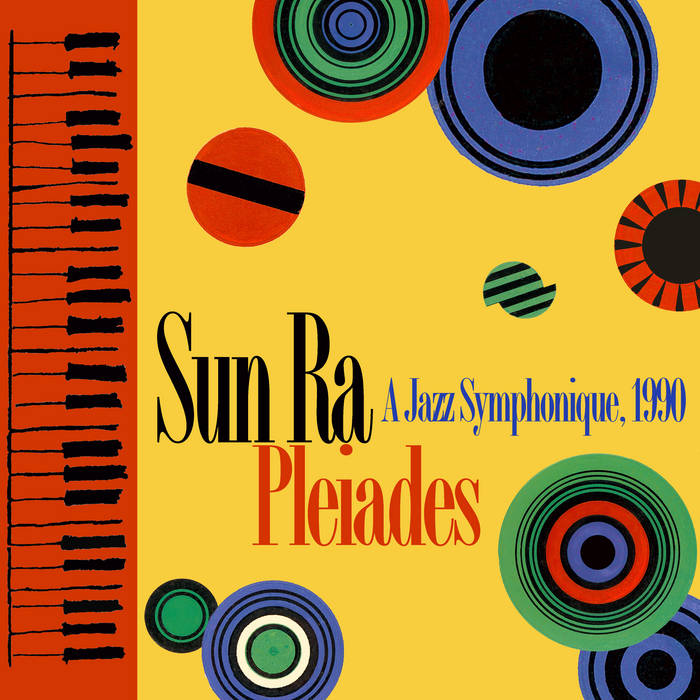 The Pleiades are an open star cluster in the constellation Taurus. One of the nearest such clusters to Earth, the Seven Sisters (as they're also known) comprise middle-aged, hot B-type stars which can be viewed by Earthlings in the night sky without a telescope. The nine brightest stars of the cluster are named for the Seven Sisters of Greek mythology and their parents.

"Pleiades" is also one of the earliest existing Sun Ra compositions, first recorded on a home piano demo by 34-year-old Herman "Sonny" Blount in his sweltering South Side Chicago apartment in August 1948. Blount had moved to the Windy City in 1946 and began musical dues-paying that found him writing arrangements for sundowning big bands and wild R&B shouters, fronting small combos in dancehalls and dives, and making a local name for himself as an ambitious composer/arranger-for-hire. That vintage demo, recorded in solitude and redolent with sandpapery surface noise, opens this album.

We then segue ahead 42 years, to the twilight of Sun Ra's long and storied career. At age 76, when many of his contemporaries were in nursing homes or under headstones, Ra embarked on six visits to Europe, several comprising multiple bookings in different countries. (This rigorous travel schedule allegedly contributed to his suffering a stroke later that year.) Among dozens of dates in celebrated clubs and concert halls, Ra led his Arkestra in a "Jazz Symphonique" at the Théâtre-Carré Saint-Vincent, Orléans, France, on October 27, 1990. Other than renditions of two Swing Era chestnuts, "Blue Lou" and "Frisco Fog," it was an all-Ra repertoire.

The opening work was the ancient "Pleiades."

The pairing of Ra's raucous Arkestra with an elegant classical ensemble, while unusual, would come as no surprise to those who followed Sun Ra's trailblazing career. To Ra, nothing was unthinkable. Across 40+ years of studio recording and public performance, Ra offered everything except consistency and predictability.

Ra discographer Christopher Trent, co-author (with Robert L. Campbell) of The Earthly Recordings of Sun Ra, recalled: "My impression is that for the Pleiades gig, a selection of classical musicians were hired rather than a complete orchestra." Ra biographer John Szwed obtained information about the concert directly from Arkestra trumpeter Jothan Callins, who had played a larger-than-usual role on the date. As recounted by Szwed in Space is the Place: The Lives and Times of Sun Ra:

“The Théâtre-Carré Saint-Vincent event in Orléans, France, was billed as a ‘Jazz Symphonique’ concert, and Sun Ra had nineteen classical musicians made available to him to add to the sixteen musicians he was bringing, which already included two violins and a cello. He threw himself into the project and bought a computer to help him produce the instruments’ parts. But once they reached Paris, Sun Ra confided to Jothan Callins that he didn’t have the arrangements ready for the larger ensemble. And though he didn’t ask for help, he seemed distraught, his hands shaking. So for the next fifty hours Callins worked with Sun Ra on the parts, transcribing and Xeroxing day and night, even adding his own composition, ‘Alabama,’ to the list, and then when the night of the performance came, Callins conducted the Arkestra for Sonny. ‘When I finished he thanked me for it,’ said Callins. ‘It was the first time I’d ever heard him thank anyone for anything.’”

The concert was apparently captured only on DAT (digital audio tape, a then-high tech, but now obsolete compact cartridge format). While the recording is generally crisp with dense ambience, the microphone placement sounds ad hoc and many instruments are heard only as distant echoes, especially horns and occasionally the piano. Three admittedly speculative scenarios: 1) considering the large number of musicians involved, perhaps the stage crew ran short of mics; 2) players shifted positions throughout the performance; and/or 3) microphones were repositioned throughout the performance. (In at least one instance, a sax solo begins solidly, then suddenly dips precipitously in volume as if the player had crossed the stage or the mic was removed—or malfunctioned. Talvin Singh's tabla are close-miked on some tracks, more distant on others.)

This rare concert was issued in the UK on a 2-CD set entitled Pleiades, on the Leo label in 1993. However, that album's audio sounds like a direct transfer from a source DAT with no attempt at sonic adjustments. Consequently, the instruments and channels are out of balance, and volume levels are erratic. The violins, drums, and tabla are well-represented, often at the expense of other instruments and soloists. In ensemble passages the horns generate enough collective power to blast through, but some soloists are exiled to the sonic shadows. The tabla (which sporadically seem to have been placed directly near a mic, or vice-versa) are often intrusively loud, and the bass drum accents explode above the limits of comfort.

Back in 1993, digital audio editing was a relatively young technology, and the more sophisticated systems were largely housed in professional studios. Software, plugins, waveform editors, and sonic juicers were primitive compared to what can be accomplished today at home on a laptop. Consequently, this 2018 digital edition offers a remarkable upgrade to that 1993 CD. Our version offers a better mix—the best that can be accomplished from a seemingly haphazard stereo capture with no isolated stems.

Michael D. Anderson, of the Sun Ra Music Archive, supplied flat transfers from two DATs of the full concert. (Each was 60 minutes, with the end of tape one overlapping with the beginning of tape two, indicating two machines were used; the mix was identical to the Leo CD.) We went in passage by passage and removed transient noises, adjusted volume levels, and made the atmosphere slightly more vibrant. Thankfully, it's possible to boost the volume of imbalanced channels because, unlike analog tape, DATs were virtually hiss-free.

The tabla slaps and kick drum blasts have been moderated (though nothing was hammered down; they were meticulously lowered hit-by-hit). The kick still has power but doesn't rattle the speakers; the tabla remain prominent—they are crisp and cut through. The playing is spectacular, and they're a crucial part of these arrangements (also we love percussion!). However, there are other instruments behind the tabla, and too much suppression would cause signal loss in those instruments.

There's a lot of onstage "rustling"—players moving stuff around, turning pages in the score, coughing, positioning themselves to play. We minimized such artifacts where intrusive (e.g., during piano solos), but left plenty of such "noise" because that's Ra and it provides a sense of space.

Audience presence has been minimized; where tracks begin and end cleanly, applause has been eliminated. Where intros or endings overlapped with applause, all music was retained and applause was faded in or out respectively. This is partly a necessity in the age of digital music, where tracks can be purchased separately and/or listened to out of context.

Some titles were inaccurate on the Leo CD. Track 2, listed as "Mythic 1," is in fact "Planet Earth Day." CD track 7, listed as "Planet Earth Day," was actually a work that Ra alternately titled "Carefree" or "Egyptian Fantasy." Two tracks not included on the Leo CD have been restored to their sequence in the concert: "Frisco Fog" and a rousing concert-closing reprise of "Planet Earth Day." ("Blue Lou," heard on the CD, had to be jettisoned from this digital edition because the instrument mix was hopelessly beyond repair. It's a showpiece for Gilmore but after he begins a rousing solo, his volume level drops precipitously as if his mic cuts out, and it remains that way for the balance of the track, which is largely an aggressive battalion of drums and percussion with most other instruments buried in the mix. Did we mention we love percussion?) In addition, track 3 on the CD, "Friendly Galaxy," actually consisted of two works—"Galaxy" was followed by a separate four-and-a-half minute work that was not indexed or listed in the CD sequence. Anderson claims the unidentified work is titled "Disciplined One." Trent adds: "It’s a separate piece, a conducted improvisation with Sun Ra standing in front of the band, signaling for various ensembles and solos. I don’t think there’s any written composition in there. It's the kind of piece Ra would often initiate after the band arrived onstage at the start of a set, but he would also use such pieces to punctuate sequences of composed music."

"'Mythic 2' is a Sun Ra composition without a real/original title," said Trent. "The title was added by Leo as a placeholder. It’s the only recording on which I have ever heard this composition as far as I remember."

The Callins original, "Alabama," mentioned by Szwed, is absent from the tapes and there is no indication it was performed.

Tremendous thanks for Christopher Trent for helping to sort out many historic facts about this date. Also thanks to John Szwed for the Callins chronicle.