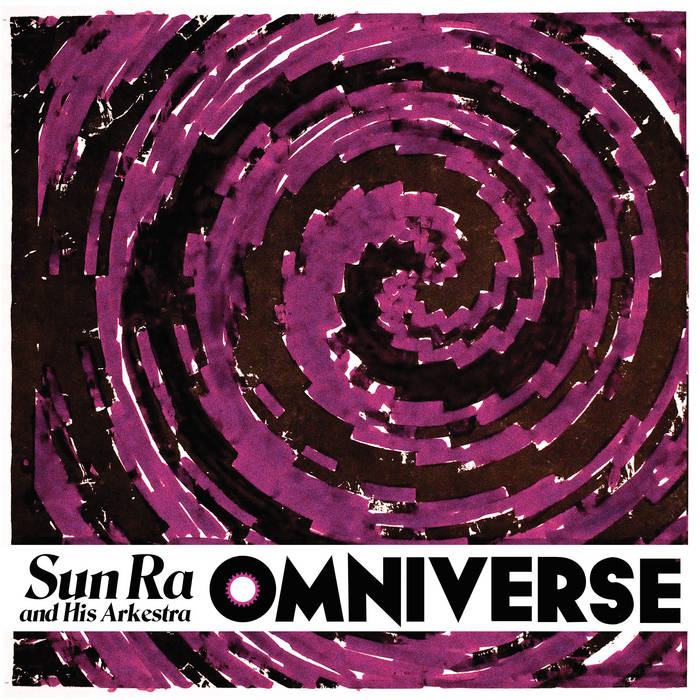 NOTE: This is a 2021 remaster of Omniverse, which is also available from Modern Harmonic on LP and CD. The CD and digital editions contain two bonus tracks (details below). The following liner notes are adapted from our 2015 five-track digital reissue of the original Saturn album.

Omniverse, recorded in New York in 1979 and released that year on Sun Ra's Saturn label, has been gathering dust for too long. It's a fine, overlooked item in the vast Ra catalog. The tracks aren't so much compositions as they are excursions, with only a few memorable themes or recurring motifs. It's pure jazz, somewhat "inside" (for Sun Ra), with little of the aggressiveness and confrontation for which the bandleader was known. (Track 5, "Visitant of the Ninth Ultimate," is an exception.) Omniverse is a very intimate album, offering lots of reflective piano in trio, quartet, and quintet settings, with spare horns. But instead of exhibiting a keyboard showcase, Sun Ra engages in dynamic interplay with the rhythm section. Moreover, the horns are featured largely as soloists; there are few ensemble passages.

Three of the works (tracks 3, 4 and 5) exist as recordings only on this album; there are no documented concert performances of these titles. "West End Side of Magic City" (a reference to the bandleader's birth town of Birmingham, Alabama) doesn't reappear in the known repertoire for twelve years—it surfaces at a May 1991 Atlanta concert, and was reprised in August at a New York club date (for which the piece was announced from the stage as "Vita Number 5"). "The Place of Five Points" is known to have been performed at a smattering of gigs between 1985-1988.

The massive and authoritative Campbell/Trent discography, The Earthly Recordings of Sun Ra (2nd ed.) lists personnel provided retrospectively by drummer Samarai Celestial, whose account includes two baritone saxophones and trumpet on tracks 4 and 5, as well as Ra overdubbing drums on 5. However, no baritone or trumpet can be heard on either track, although there are baritone and muted trumpet on track 3, and there is a second drummer on track 1. (This is not a knock on The Earthly Recordings, which is encyclopedic in scope, and which has required the authors to sort through contradictions, uncertainties, and unknowables inherent in the cosmic legacy of Sun Ra.) An LP copy with a plain white label turned up on eBay, and bears a circular pen inscription indicating six musicians, who are listed here.

There was no official album sleeve for the Omniverse LP. Existing copies feature hand-artwork and pasted graphics on generic cardboard sleeves. One of these has been adapted for the "cover" of this digital release.

The 2021 Modern Harmonic CD edition included two bonus tracks, both of which were issued for the first time on two of our expanded digital releases: a Sun Ra solo piano rendition of "Over the Rainbow," one of Sunny's favorite and often-performed standards. This performance originated from Germany's Moers Music Festival in June 1979, and was added to our digital remastering of the all-solo piano album AURORA BOREALIS. Finally, "The Sound Mirror," featuring the Arkestra, is not the version which appeared as the title track on Saturn #19782 in 1978. This performance, believed to date from late 1977 or early 1978, features a tighter arrangement and greater sonic clarity. We first issued it on the digital remastering of TAKING A CHANCE ON CHANCES. The versions of both tracks are identical to the digital versions found on those two albums, so pardon the overlap.

Personnel on track 7 can be identified if you know the styles of Ra's sidemen.

All titles composed by Sun Ra © Enterplanetary Koncepts (BMI)
except "Over the Rainbow" by Arlen & Harburg © EMI Feist
Issued under license from Sun Ra LLC. Thanks to Thomas Jenkins, Jr.

Special thanks to Craig Koon and Timothy Stollenwerk