My Brother the Wind, Vol. 2 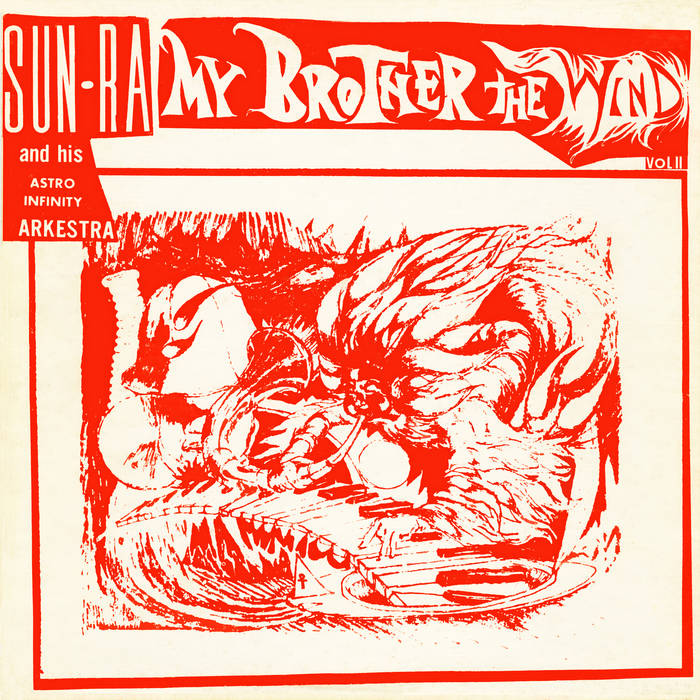 With Sun Ra you get everything but consistency and predictability. My Brother the Wind Vol. II is no exception. On the original 1971 Saturn LP, side one consisted of sizzling Afrosoul, highlighted by June Tyson's vocals and Sunny's simmering "intergalactic organ" (a Farfisa). Ra discographer Robert Campbell calls it "spaced-out barbecue music," and it's one of the most accessible outings in the artist's first post-Chicago decade. Side two is a non sequitur, consisting of Sun Ra giving a new Minimoog a workout. Artist's prerogative — two Sun Ra's in one (often the case with his oddly juxtaposed LP tracks).

The ensemble pieces (1-6) were recorded at Variety Studios, probably in early 1970. This is a tight band, and with the exception of "Contrast," these tracks feature something not found on many studio recordings by Ra in the 1960s—a groove, one closer to roadhouse R&B than jazz. There's a bit of Memphis blues, a touch of Booker T & the MGs, albeit with Sun Ra's usual disregard for Top 40 niceties. The horns contribute some characteristically spirited solos.

However, nothing foreshadowed what awaited the listener who flipped the platter.

In 1969, Sun Ra had recorded on Moog synth modules at the New York midtown studio of Gershon Kingsley. Those recordings were issued on My Brother the Wind, Vol. 1 (although it was not titled "Vol. 1"— it only achieved that reference after "Vol. 2" appeared). The following year, drummer Tommy Hunter arranged a meeting between Sun Ra and synth pioneer Robert Moog in upstate Trumansburg, New York, to demonstrate the new Minimoog. Tracks 7 thru 11 were reportedly recorded at this demo session (see notes below), after which the inventor offered Sunny one of the first Minimoogs to take on the road. It was a custom model, and may have been handed off just before the unit appeared on the consumer market.

Because of the ad hoc nature of the session, the Moog works, though titled, sound improvised, as Sunny tests the keyboard action, seeks chromatic capabilities, and adjusts tones and timbres. Fans of Switched-On Bach may be horrified (just as many fans of Bach were horrified by Switched-On). With the Moog, Sun Ra was not looking to reproduce existing music; he was exploring the unknown, tapping into the future, levitating thru the cosmic flux, as the titles indicate.

Because of sub-optimal recording conditions, the tracks are lo-fi and several display severe distortion. We have elected to leave in some of the distortion (particularly on tracks 10 and 11) because suppressing it would have removed a significant part of the audio signal. This is, in fact, how the originals sound on the tapes and on original Saturn LPs. We do not believe this distortion was caused by tape aging or poor storage. This is what Sun Ra recorded and commercially released. The results may not be sonically pristine, but they do reflect historic early encounters between an adventurous musician and a new music-making technology, one that Sunny would use often in concerts and recording sessions over the next few years.

Tracks 1 thru 6 recorded at Variety Studios, New York, probably early 1970. Historians disagree on the recording location and date for tracks 7 thru 11. Several sources cite Variety Studios, in New York, 1969. Michael D. Anderson of the Sun Ra Music Archive insists these were recorded at the R.A. Moog factory, in Trumansburg, New York. If Ra did in fact play Minimoog, the year had to be 1970 at the earliest, because the Mini was not invented until that year.