God Is More Than Love Can Ever Be [CD, LP, digital] 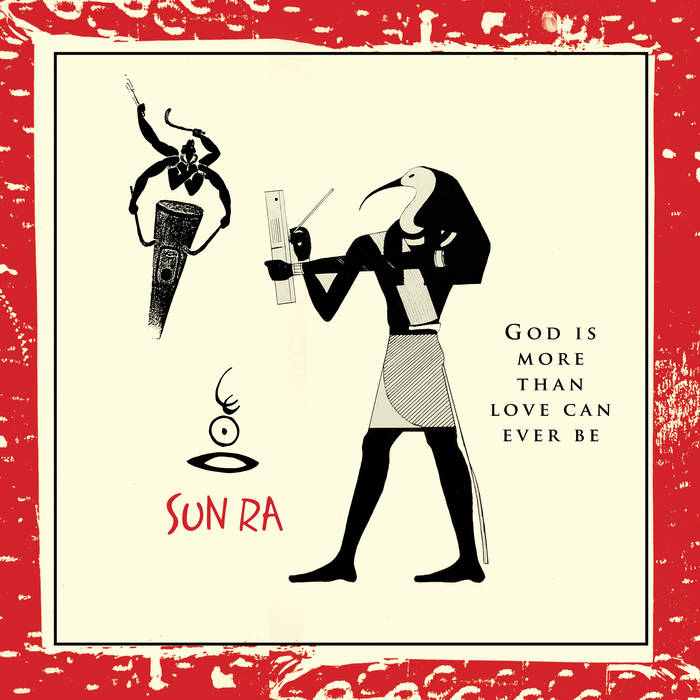 Chai 777 God the Holy Spirit and I approve this music Favorite track: God Is More Than Love Can Ever Be.

God Is More Than Love Can Ever Be is something of a rarity in the Sun Ra catalog—a cohesive album, with none of the stylistic eclecticism and musical chair shifting found on many of the artist’s self-released LPs. Recorded at Variety Studios one day in 1979, the album's five tracks comprise a solid jazz trio set.

It's also unusual because it had not previously been reissued. In March 2018 Cosmic Myth Records issued a newly remastered edition in LP, CD and digital formats. The LP and CD packages contain liner notes by jazz historian Marc Medwin and Sun Ra catalog administrator Irwin Chusid (who produced the reissue), as well as two previously unpublished photos of Sun Ra by jazz portraitist Veryl Oakland.

God is More Than Love is the only complete piano-bass-drums studio session in the massive Sun Ra catalog. What would have drawn the bandleader, 25 years into his recording career, to adopt a format that had been common in jazz for decades? Drummer Samarai Celestial (Eric Walker) recalled it being his first recording date with Ra; they were joined by bassist Hayes Burnett, who gigged with Ra on and off for a decade.

Other than an overdubbed second piano on "Days of Happiness," the five works were spontaneously generated and forever fixed: none of the titles recur in the encyclopedic Ra discography. Originally released on Ra's private Saturn label in small press runs (under the alternate title Days of Happiness) from 1979 to 1981, fully realized artwork was never established and the album got scant circulation; hence, it has remained a largely overlooked session in the Ra omniverse. Nearly 40 years later, the record is long overdue for acclaim.

COSMIC MYTH RECORDS is is a partnership of Chusid, Michael D. Anderson (of the Sun Ra Music Archive) and Virtual Label Group, working under license from Sun Ra LLC, comprised of the heirs and rightsholders of Sun Ra's music. The label's first release in 2017 was a full stereo, remastered edition of Ra's 1965 magnum opus THE MAGIC CITY, with liner notes by Christopher Trent and Ben Young. It was followed by an expanded 2-LP edition of MY BROTHER THE WIND, Vol. 1, Ra's 1969 Moog synthesizer tour-de-force, remastered from session tapes, with rare and previously unreleased tracks and liner notes by Ben Young and Moog historian Brian Kehew.

In February 2019, CMR issued a three-volume set of MONORAILS AND SATELLITES, consisting of solo piano works by Ra recorded in 1966, including one volume of previously unissued material and liner notes by pianist Vijay Iyer, three-time Down Beat Jazz Artist of the Year.

If you like God Is More Than Love Can Ever Be [CD, LP, digital], you may also like: