Discipline 99 (Out Beyond the Kingdom Of) 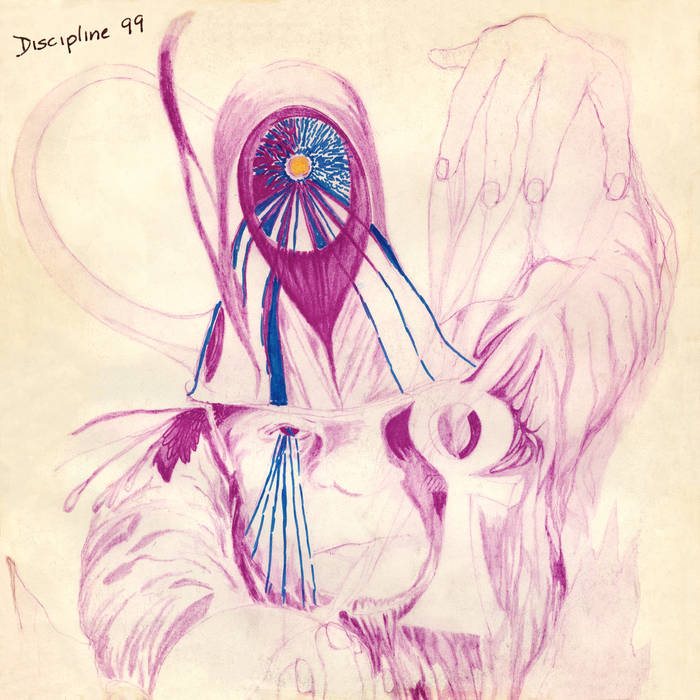 Discipline 99, a.k.a. Out Beyond the Kingdom Of, was recorded at a Hunter College, New York, performance by Sun Ra & His Arkestra on June 16, 1974. Selected titles were issued that year on LP (Saturn 61674); the album went thru several pressings with different-colored labels, at least as late as 1980. As with many privately pressed Saturns from the 1970s and '80s, the total press run is unknown, but presumably it totals in the hundreds, not the thousands, hence original copies are rare.

Some copies of D99 featured a generic "Acropolis" cover, others were hand-decorated or sported paste-on art. The cover of this digital edition, scanned from an LP sleeve in the collection of Gilbert Hsiao, features one of the best illustrations we've seen of ANY Saturn DIY release. (The artist is unknown; this illustration graced the sleeves of other Saturn releases from the period, but this particular cover had "Discipline 99" handwritten in the upper left.)

Facts and a bit of speculation about this date were chronicled in The Earthly Recordings of Sun Ra, by Robert L. Campbell and Christopher Trent. At the time of the first edition of ER, a 95-minute audience tape had been identified that included most of the first set, and part of the second set (the end of the set, it turned out); by the time the book was updated in 2000, a second audience tape (recorded by a different attendee) had been located, containing 105 minutes of concert audio. From these two tapes, Campbell and Trent were able to assemble two likely (but not conclusive) set lists for the concert, including titles which were omitted from the Saturn release.

“Solar Ship," which RLC/CT believe opened the second set, includes an unidentified emcee announcing the band as "Brother Sun Ra and the Space Orchestra." However, this intro is not on either tape; it appears only on the Saturn LP, unfathomably sequenced as track 4, the final track on side A. For this digital edition, "Solar Ship" opens the album, where an emcee's introduction belongs. Is it possible this intro originated at a different concert? With Ra's penchant for intrigue, anything is possible.

From ER: "The second, longer tape indicates that 'Cosmos Synthesis' was edited on the Saturn release. Both tapes reveal that 'Keep Your Sunny Side Up' was faded [on the LP] at the end of John Gilmore’s solo (solos by Kwame Hadi, Pat Patrick, Ra on piano, and Ronnie Boykins, plus the final ensemble, were cut, probably because Hadi was off-mic during his solo). [We] identified the baritone sax soloist on this number as Charles Davis, but the electric bass line on 'Angels and Demons' would indicate Pat Patrick. A long bowed bass solo on 'Discipline 27' is the work of Ronnie Boykins, and Danny Thompson can be heard on the Neptunian libflecto during 'The Shadow World.' A second [unknown] trap drummer is audible on 'Angels and Demons.'" [These latter titles were not included on the album.]

"Discipline 99" (the track) starts as a recurring "Discipline" dirge (a cryptically numbered series of Ra compositions), but after a few minutes of ensemble play it segues into a lovely and unpredictable 7-minute solo piano odyssey. In this era—mid-1970s—Ra more commonly performed and recorded with an arsenal of electronic keyboards. He never abandoned the piano, and during this period tracks featuring piano were scattered throughout many recording projects (live and studio). But it wasn't until 1977 when Ra recorded two solo albums for Paul Bley's Improvising Artists label that he gravitated back to acoustic piano for full sessions. His piano chops were showcased on such late-'70s releases as Some Blues But Not the Kind That's Blue (1977), God Is More Than Love Can Ever Be (1979), Omniverse (1979), and a 1977 solo concert in Venice, Italy, that was recorded and posthumously released. While no statement from the artist exists for this career arc, it's well-known among Ra scholars that after he moved to Philadelphia in the late 1960s, Ra no longer had an acoustic piano in his living quarters-cum-rehearsal space.

The standard "How Am I To Know" (lyrics by Dorothy Parker) opens with an extended solo piano passage, after which Gilmore enters with a soulful tenor serenade. With drums and bass barely audible due to ad hoc mic placement, the recording essentially qualifies as a duet.

"Out Beyond the Kingdom Of" is also based on the Discipline template, with June Tyson repeating for emphasis Ra's declamations about the world having ended 3,000 years ago. The second (after Ra) declarative male voice on "Outer Space Employment Agency" and "Journey to Saturn" belongs to horn player Akh Tal Ebah, with responses by a vibrant June Tyson (who regrettably is not well-miked on these recordings).

The overall audio quality is so-so, but for Sun Ra, sonic deficiencies were always secondary to artistic intent. A close listening will reveal some very artful performances on Discipline 99, especially by Ra and Gilmore.

All titles composed by Sun Ra © Enterplanetary Koncepts (BMI), except:
"How Am I to Know" by Dorothy Parker and Jack King © EMI Robbins (ASCAP)
"Keep Your Sunny Side Up" by Lew Brown, Buddy DeSylva, and Ray Henderson © Ballentine/Chappell/Henderson (ASCAP)