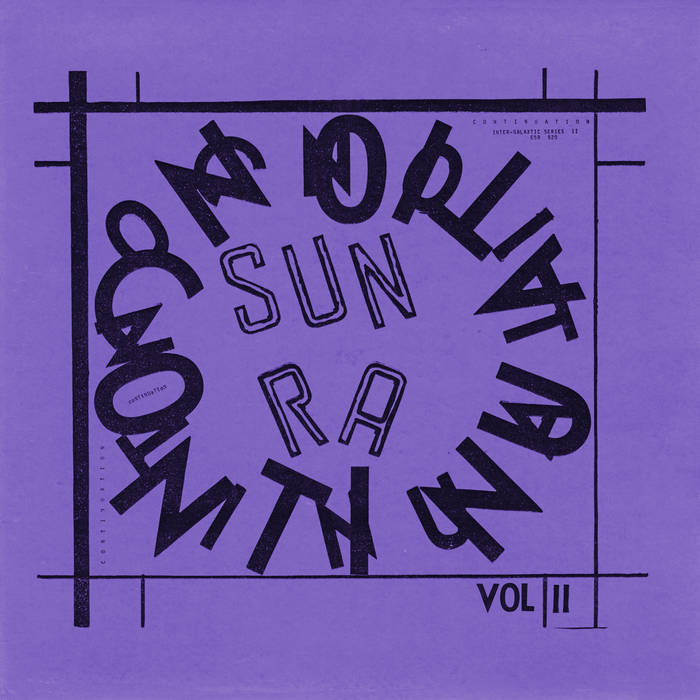 Continuation 2 would surprise Sun Ra, because he never released any such album. Around 1970 he did release Continuation, a limited-pressing LP of recordings whose origins have confounded experts. The Robert Campbell-Christopher Trent discographic atlas, The Earthly Recordings of Sun Ra (2nd edition, pub. 2000), provides some guidance on personnel, but the citations contain many question marks. Several authorities believe these sessions date from 1968 or '69, yet they echo recordings made in the early 1960s at the Choreographer's Workshop. That location (and the year 1963) was cited on a limited-pressing Corbett vs. Dempsey 2CD set of Continuation, linking it with early '60s recordings on Secrets of the Sun and Art Forms of Dimensions Tomorrow. In 2014, Campbell-Trent offered a reconsideration: "normally dated 1968-69, but on stylistic grounds an earlier date is likely for these tracks."

Sun Ra Archives Executive Director Michael D. Anderson, who transferred these tracks from undated master tapes, insists they originate from '63 and were recorded at CW. That venue was a longtime Arkestra rehearsal space and ad hoc recording studio, a residency that began shortly after their 1961 arrival in NYC following the formative Chicago years.

The recordings on Continuation Vol. 2 (all in full stereo) feature small ensembles of between six and eight players, typical of CW recordings from the early '60s. At the time, Sun Ra was working largely with musicians who had come east with him, along with a handful of New York recruits. One of the few clues that argues against CW is the absence of the harsh warehouse acoustics characteristic of the Workshop basement. These recordings have a warmer studio feel, though they still reflect a low-rent setting.

Stylistically these works bridge the Chicago post-big band sound (the soulful ballad "Blue York" and the languid "Ihnfinity") with the bold, experimental direction of Sunny's 1960s NYC recordings ("Meteor Shower" and "Conversation of the Universe"). Perhaps a clue can be found in track 7, a medley of sorts entitled "Cosmic Rays/The Next Stop Mars." The latter was first recorded in 1963 and released in 1966 on When Angels Speak of Love.

The now out-of-print package by Corbett vs. Dempsey packaged both albums under the title Continuation. Strangely the raw tape transfers were not digitally repaired by the label, resulting in such preserved (and unwanted) artifacts as volume disparities, audio dropouts and gaps, transient noises, and excessive hiss. Granted, on many Sun Ra albums those are features, not bugs; yet today's digital audio software can overcome—or at least minimize—many of the technical flaws of vintage recordings.

For this remastered edition, we have undertaken meticulous digital restoration to remove these flaws as much as possible. These recordings are not—and never will be—pristine. Recordings made 50 years ago, preserved on audio tape which was subjected to haphazard storage over the decades, cannot be perfected. However, when remastering Sun Ra recordings, such a goal is a fool's errand. In the process of trying to achieve perfection, we would likely remove layers of soul.

We have opted to separate the original LP contents from the unreleased material and package them as Continuation Volume 1 and Volume 2, each featuring the same cover with different color schemes. Both are available in our Bandcamp catalog.