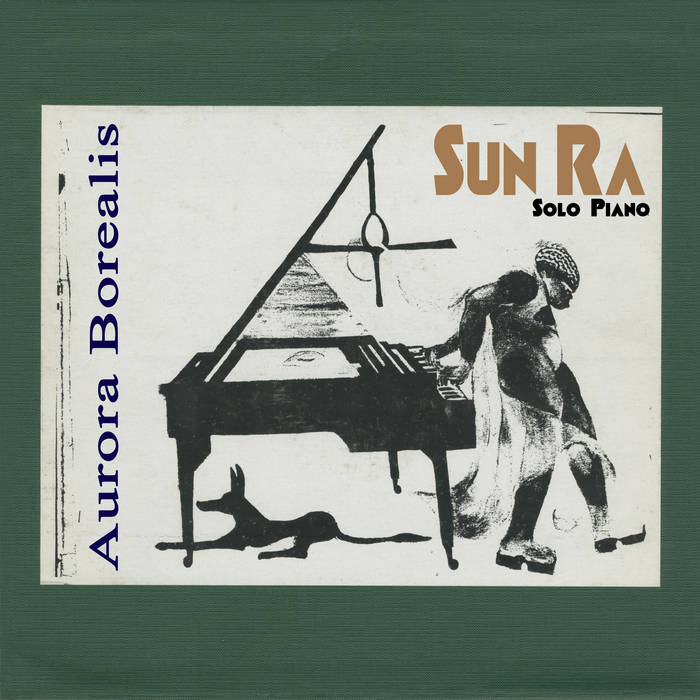 Considering the monumental size of Sun Ra's recorded oeuvre, there are surprisingly few solo piano albums in the catalog of this keyboard colossus, and very few on his own Saturn label. Other than Monorails and Satellites Vols. 1 and 2, both recorded around 1966, Aurora Borealis is the only other known Saturn release exclusively featuring solo piano. Solo 88's are scattered across numerous other Saturn LPs, and there's a handful of such excursions on other labels.

It's a mystery where the Aurora tracks originated, and perhaps when. The Earthly Recordings of Sun Ra (2nd ed.), by Robert Campbell and Christopher Trent, attributes the four tracks to a live performance at an unknown location on Dec. 4, 1980, and adds that the album (Saturn 12480/10480) first appeared that same year (with some extant copies titled Ra Rachmaninoff). The LP label displayed a 1981 phonoright.

Before he became Sun Ra, young Herman Blount attended Alabama A&M University in Huntsville as a music education major. He received much classical training, with Chopin, Rachmaninoff, and Gershwin (show tunes and grand concert works) becoming favorites. In his 1950s Chicago years Sunny often warmed up with classical repertoire. On Aurora, Rachmaninoff's Prelude in C♯ Minor gets an aggressive Glenn Gould-meets-Conlon Nancarrow makeover, followed by the meditative "Quiet Ecstasy." The title track continues the reflective mood, punctuated by discordant thunder, which evolves into a hailstorm of notes and clusters on the LP's closer, "Omniscience."

We round out this digital edition with three contemporaneous solo piano bonus tracks. The first, "Rumpelstiltskin," only appeared on a now-rare 1980 Saturn LP entitled I, Pharaoh. Believed to have been recorded in 1979 at an unidentified location (possibly Grendel’s Lair in Philadelphia), I, Pharaoh includes two other tracks, both featuring Sun Ra & His Arkestra, and both plagued by inferior audio. Because "Rumpelstiltskin" was recorded in the same time frame as Aurora Borealis, and because its sound quality is acceptable, this track has been rescued from its Pharaonic oblivion and added to this release. The recording is stereo, and the title does not otherwise recur in the massive Ra discography.

Next we have "Over the Rainbow," a perennial Ra favorite. This beautifully recorded rendition was performed live at the Moers Music Festival, West Germany, on June 1, 1979. This track has not been previously released commercially, and it is a BANDCAMP EXCLUSIVE.

Finally, we cap the set with Ra's evergreen "Love in Outer Space," recorded during soundcheck before an August 1979 performance at NYC's Squat Theater. This recording has never before been commercially issued. The backdrop of creaky piano bench, stage noise, and casual conversation are to be considered part of the work; think of it as John Cage's 4:33 with notes.

All titles composed by Sun Ra © Enterplanetary Koncepts (BMI)
Except "Over the Rainbow" by Arlen-Harburg (EMI Feist, ASCAP)