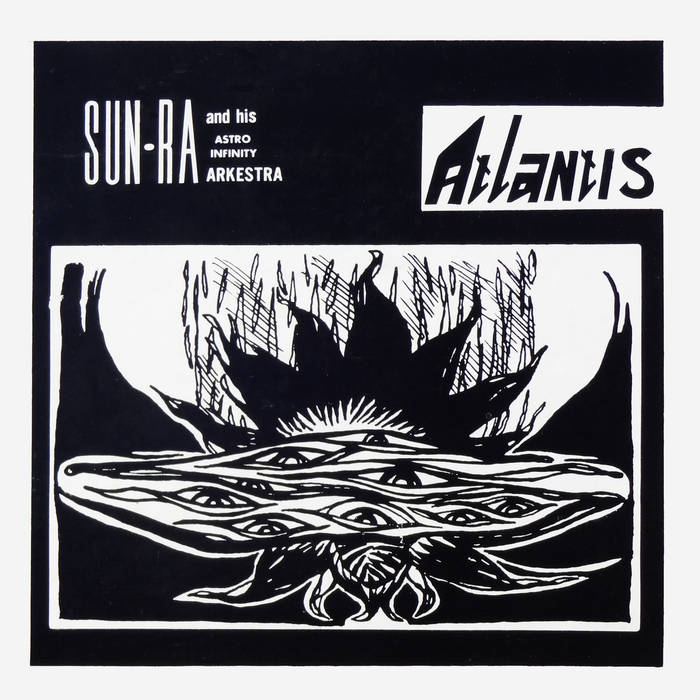 The Atlantis LP, recorded in New York in 1967 and 1968, was in effect a pair of EPs, as the two sides radically differed. Side one (tracks 1–5 on this digital release), recorded at Sun Studios, consisted of short rhythmic works arranged around the Hohner Clavinet, which Ra dubbed the "Solar Sound Instrument." This keyboard had only been on the market about a year before Sunny adopted it as a featured instrument, pairing its electronic pulses with saxophone and African-style percussion.

The version of "Yucatan" that appeared on the Saturn LP was the first half of a longer, two-part work. An edited portion of the second half, different from the first but similarly titled "Yucatan," appeared on a 1972 Impulse! LP reissue in place of the Saturn LP version. For this remastered edition, we have included both versions, herein titled "Yucatan I" and "Yucatan II" (which appears here in full, two minutes longer than the Impulse! track).

Side two of the LP featured the title track — an epic, 22-minute sonic tapestry, built around Sunny's aggressive free (or "Space") jazz keyboard improvisations, with the band sporadically joining the fray. It was recorded at the Olatunji Center of African Culture at 125th Street and Lexington Avenue, in New York, in August 1967. During this period, the Nigerian drummer Babatunde Olatunji and Sun Ra had become friends and often shared ideas on music and African culture.

"Atlantis" is an overpowering—and at times frightful—assault which refuses to coalesce into any conventional structure, and augurs Sun Ra's increasingly adventurous performances in the 1970s. The keyboards used were a Clavioline and a Gibson Kalamazoo Organ (which Ra re-christened the "Solar Sound Organ"). During this performance, according to biographer John Szwed, "Sun Ra rolled his hands on the keys, pressing his forearm along the keyboard, played with his hands upside-down, slashing and beating the keyboard, spinning around and around, his hands windmilling at the keys—a virtual sonic representation of the flooding of Atlantis." It is an uncompromising work by an artist unafraid to challenge his audience. The original 45-minute performance was projected for a full album, running across two sides. However, it was edited to fit onto one side of an LP, and is here presented in its commercially released form. A release of the complete recording is in our project queue.