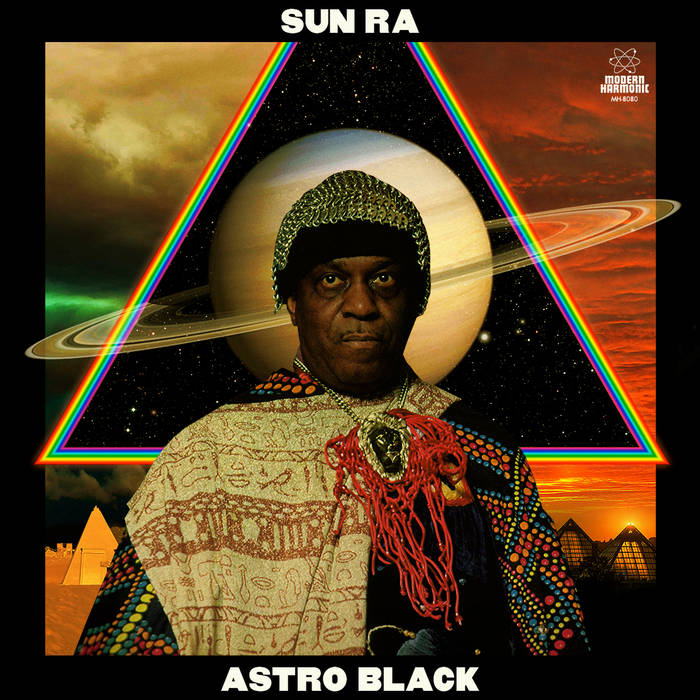 After years of self-releasing albums on his own Saturn label, Sun Ra signed with ABC's Impulse jazz imprint in 1972. A reissue series of earlier hard-to-find Saturn LPs was undertaken, along with a few new projects. The first premiere, Astro Black, was recorded and released in 1973 in the now-obsolete quadraphonic format (tho it was playable on stereo phonographs). The undertaking signaled a noble campaign on the part of Impulse producer Ed Michel to mainstream Sun Ra and broaden his audience, without any sacrifice of artistic integrity.

But the effort was doomed: the label suffered commercial losses on the project and lost faith in avant-garde space funk. Within two years, after corporate reshuffling (i.e., firings and hirings), ABC's Sun Ra project was abandoned. The company clipped the corners of the cardboard sleeves and dumped the lavishly illustrated gatefold LPs in record store discount bins (or as some disgruntled fans claimed, UNDER the bins). Yet the Sisyphean venture produced some worthwhile new music.

Astro Black was a return to quasi-accessibility, away (though not completely) from the anti-jazz experimentalism of the late 1960s, and toward synthesizer-driven space jams. The Arkestra's horn skronk was still prominent, but on side one of Astro Black it was largely anchored by the propulsive rhythm section of returning bassist Ronnie Boykins and drummer Tommy Hunter (along with a battalion of African percussion). With Sun Ra perched behind his Minimoog, this is very much a 1970s album. But as any listener will attest, it's also very much a Sun Ra album.

On the 11-minute title track, vocalist June Tyson croons a siren song above bassist Boykins' snaking groove. About 3-1/2 minutes in, the Arkestra achieves liftoff, after which they explore some free interplay the rest of the way.

"Discipline 99" is a loose, relaxed space walk with some fine ensemble work by the horns. The "Discipline" series, variously numbered and composed by Ra during the 1970s, were generally group-performed works which omitted solos; this recording is an exception, showcasing expressive offerings by John Gilmore (tenor sax), Akh Tal Ebah (trumpet), and the bandleader (electro-vibraphone). The percussion-heavy "Hidden Spheres" serves up some steamy African exotica, with Marshall Allen (alto sax), Kwame Hadi (trumpet), and Eloe Omoe (bass clarinet) intensifying the mood.

Side B of the LP (here track 4) consists of "The Cosmo-Fire," a sprawling 18-minute otherworldly affair of conducted Afro-futuristic improvisation unified by Boykins' inventive bass and punctuated by Sunny's synth and organ. The work provides an uncompromising contrast to the album's A-side, and proved that despite the major label upgrade, Sun Ra was intent on challenging his listeners.

There's a short chronicle of Ra's Impulse adventures in "The House That Trane Built: The Story of Impulse! Records," by Ashley Kahn. The book includes the following amusing anecdote by Ed Michel, in which he recalls his first Sun Ra mixing session in 1972: "I liked to mix at the pain threshold. It was really loud. We were mixing it quadraphonically in a relatively small room. Sun Ra was sleeping deep and snoring loud. For some reason, I stopped the tape in the middle of the tune. He came awake, wheeled his head like an owl does—all around the room, checking everything out. He said, 'You Earth people sleep too much.' He put his head down and started to snore again."

This 2018 edition was remastered by Modern Harmonic Records, under license from Sun Ra LLC, workings from tapes provided by Michael D. Anderson of the Sun Ra Music Archive. The CD and LP editions include liner notes by Sun Ra discographer Robert L. Campbell.

Produced by Sun Ra and Ed Michel
Believed to have been recorded in Los Angeles, in May 1972 and originally issued in 1973 as Impulse! AS-9255

Issued under license from Sun Ra LLC, via Irwin Chusid
Special thanks to Thomas Jenkins, Jr.