I Roam the Cosmos (Premiere Release) 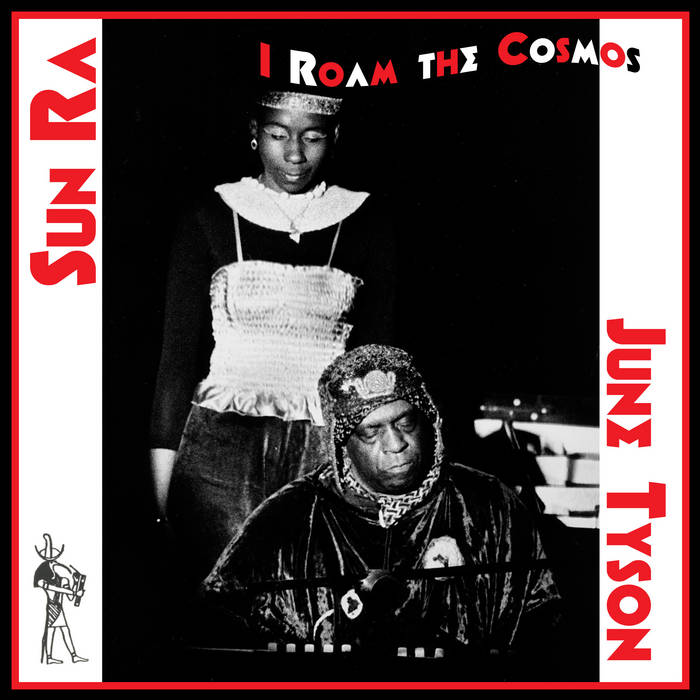 \js sunny & june in all their glory. and let's not forget about the arkestra- keepin that groove for all 50 minutes (with just enough variance to keep it interesting without distracting from the two soloists and their singing/speaking/echoing magic ...)

The composition "I Roam the Cosmos" has never before appeared on a commercial release. (It should not be confused with "We Roam the Cosmos," an entirely different Sun Ra title which has been issued.) The massive Campbell-Trent Sun Ra discography contains only two references to this title: a Voice of America monophonic tape of a 1973 performance at Carnegie Hall; and an audience tape of a 1974 performance at Hunter College. This recording is neither—it's clearly a soundboard recording and it's in extreme stereo.

The cosmo-drama begins with June Tyson reciting the lyrics to "Astro Black" over the dirge-like "Discipline 27-II" groove; it then segues into call-and-response declamations between Sun Ra and Tyson as the Arkestra sustains the languid "D27-II" rhythm for close to an hour, punctuated by choruses of horns. Seemingly switching identities—all in the first person—Ra intones cosmic philosophy, conjures enlightenment, proffers myths, and delivers dire forecasts, with Tyson echoing and dramatizing each invocation.

Based on tape box markings, the performance took place in July 1972 at the Lower East Side jazz mecca Slug's Saloon, located on East 3rd Street, where from the late 1960s to the early '70s Ra and the Arkestra frequently performed all-night sets. The personnel fluctuated, depending on who showed up, who could play (or capably fake) an instrument, and the bandleader's divinations. These legendary evenings were raw and unpredictable, often calamitous, and not without artistic controversy. They brought Sun Ra to the greater attention of New York jazz habitués and advanced his reputation for audacious showmanship. The 1972 album Universe in Blue contained performances recorded there, and many Slug's tapes survive in the Sun Ra Music Archive collection. The audio fidelity, room tone, channel separation, and mic artifacts on "I Roam the Cosmos" are very similar to those on Universe.

These recordings are not hi-tech; they were reportedly captured with a pair of microphones placed on or near opposite sides of the stage. Considering this primitive set-up, the fidelity is quite good, and the raw cosmic soul of this Sunny-June duet is undeniable.