When Angels Speak of Love 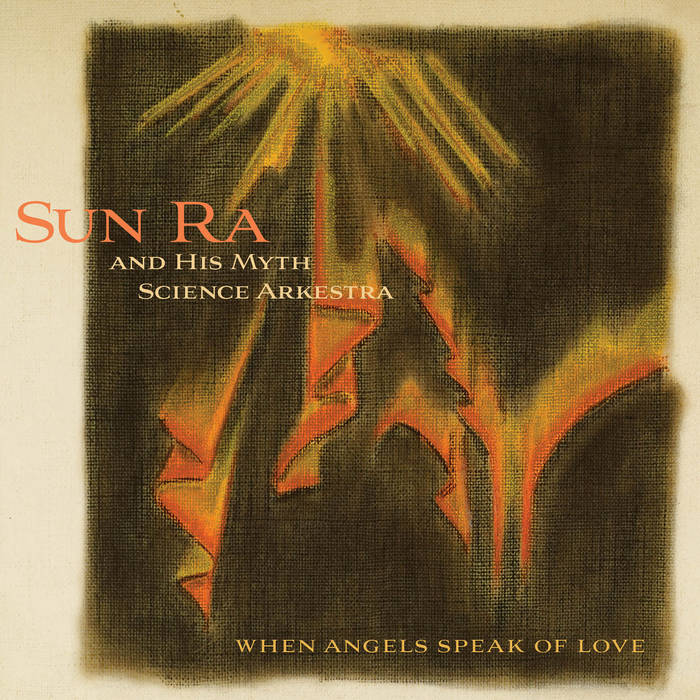 2019 UPDATE: NOW AVAILABLE ON CD from COSMIC MYTH RECORDS. The CD reflects the digital version, but there has been a slight upgrade of audio quality. In addition, the CD package contains a full historical chronicle as well as liner notes by jazz journalist Clifford Allen and a newly designed cover using previously uncirculated vintage artwork by Claude Dangerfield.

When Angels Speak of Love, released in 1966 on Sun Ra's Saturn label, is a rarity, there having been limited pressings (150 copies, by one estimate), which were sold thru the mail and at concerts and club dates. The tracks were taped in New York during two 1963 sessions at the Choreographer's Workshop, a rehearsal space/recording den with warehouse acoustics. Ra spent countless hours at the CW from 1961 to 1964 sharpening the Arkestra during exhaustive musical huddles. John Corbett calls this "one of the most continuous, best-documented periods of Ra's work"; much tape from these seminal sessions has survived and been issued on LP, CD and digitally.

Following the musical trajectory Ra launched shortly after his 1961 exodus from Chicago to New York, the works on When Angels Speak are less composed than directed. Despite the seemingly unbound playing, it is an orderly chaos. Ra rejected the term "free jazz." (His views on freedom generally are, to put it kindly, complex; he referred to his band as "the Ra Jail," explaining, "my jail is the best jail in the world, they learn things in my jail.") Yet there is undeniable liberation in this music. There's also, thanks to Tommy Hunter's freestyle tape reverb, a pre-psychedelic quality.

Ra biographer John Szwed observed in his book Space is the Place: "When Angels Speak of Love was considered a bizarre record when it was heard even three years later, made more bizarre by extreme echo, horns straining for the shrillest notes possible, rhythms layered, their polyrhythmic effect exaggerated by massive reverberation (which was abruptly turned off and on). 'Next Stop Mars' is the album centerpiece, a long work which opens with a space chant, followed by Marshall Allen and John Gilmore taking chances on their horns beyond what almost any other musician would dare at that time. Sun Ra played behind them, relentlessly spinning around a single tonal center with two-handed independence, then rumbling thunderously at the bottom of the keyboard against Ronnie Boykins's bass, a clangor made heavier by electronic enhancement."

William Ruhlmann at AllMusic observed, "Sun Ra's music is often described as being so far outside the jazz mainstream as to be less a challenge to it than a largely irrelevant curiosity. But When Angels Speak of Love is very much within then-current trends in jazz as performed by such innovators as John Coltrane and Ornette Coleman. Walter Miller's trumpet on 'The Idea of It All,' for example, indicates he'd been listening to Miles Davis, even as John Gilmore's squealing tenor suggests Coltrane; and, on 'Ecstasy of Being,' what John Corbett calls Danny Davis' 'excruciated alto' suggests Coleman. Ra himself plays busy, seemingly formless passages that are reminiscent of Cecil Taylor. This is a Sun Ra album that is more conventionally unconventional than most, with tracks you could program next to those of his 1960s contemporaries and have them fit right in."

Known Saturn LP copies of When Angels Speak were pressed in mono (as was a CD on Evidence), but stereo versions of three tracks have surfaced. Two (the title track and an abridged version of "Next Stop Mars") were included on a 1989 Blast First/Restless Records release. In 2016, a stereo "Celestial Fantasy" was discovered in Michael D. Anderson's Sun Ra Music Archive on a session reel.

The mono version of "Next Stop Mars" clocks in at 18 minutes, but the stereo version just 12. Rather than having been cut for space constraints (Ra would have scoffed at the notion that space has constraints), the abridgement might be Ra revisionism. The bandleader was involved with the BF/RR project, having provided tapes (the whereabouts of which are now unknown). The fade is organic, occurring during a rumbling piano sustain after the band stops playing. Perhaps Ra exercised a composer's prerogative, having decided that from a vantage point of 26 years' reflection, the piece had climaxed at the 12-minute mark (or that by 1989 advanced interplanetary rocketry had helped the Arkestra more quickly reach Mars).

We found pitch and speed differences between mono and stereo mixes. In fact, there were pitch variations within particular versions—the mono "Celestial Fantasy" alters pitch in the final 40 seconds. For this digital edition, all pitch variants have been roughly normalized (if the word "normal" can apply to anything associated with Sun Ra). But we extend a caveat: if you're hypersensitive to pitch, don't listen to Sun Ra. We prescribe Mel Tormé.