We Travel the Spaceways 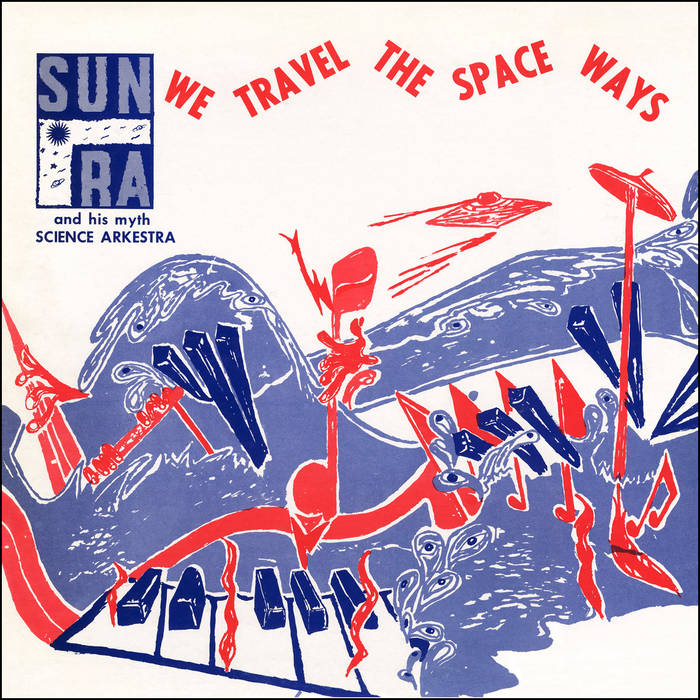 We Travel The Spaceways (sometimes spelled "Space Ways") ranks as an essential Sun Ra collection. It's brief (less than 25 minutes), and though it was recorded in three separate, unrelated sessions over a five-year-span (making it a compilation rather than an album), it's chock full of "hits"—or what would be chart-toppers in the perfect Sun Ra universe. Alternate versions of all seven tracks appeared on other Ra albums; a number of these titles became perennial club and concert favorites; and Spaceways contained two of Sun Ra's beloved Arkestra "chants"—"Interplanetary Music" and the title track. The recordings were made in Chicago from 1956-1961, but the album was not released on Ra's Saturn label until 1966 , long after Sunny and his band had relocated to New York and zoomed light years beyond the forms etched in the grooves of that platter.

In retrospect, every period in Sun Ra's career seems transitional, but 1959-1961 especially so. It was during these years that he began to musically stray from his Chicago haunts and navigate through the weightless cosmos. In the mid- and late-1950s Sunny had begun to incorporate Egyptian and Ethiopian themes into a music that already drew on American and European traditions. Like many musical pilgrims, he was creating hybrids that would decades later be trivialized with the pretentious (and Eurocentric) marketing term "World Music." By 1959, Sun Ra was creating Other-World Music. Four titles on Spaceways—and arguably a fifth, "New Horizons"—are not of this Earth.

In the bebop/hard-bop periods, there was a movement from traditional pulse-driven jazz to abstract forms more suitable for concert halls than dance halls. Gunther Schuller defined Third Stream as "located halfway between jazz and classical music." Figures like George Russell, Charles Mingus, and Stan Kenton pioneered the field, which had a huge impact on 1950s jazz (and on classical). Sun Ra has never been considered an exemplar of Third Stream, but clearly he was influenced—and in some ways, perhaps, liberated—by this adventurous hybrid. Then again, Sun Ra, like Ellington, was sui generis. The marketing tags never quite applied.

Sun Ra's increasingly ambitious projects in Chicago foreshadowed the New York Choreographer's Workshop period, during which he often seemed to abandon jazz altogether. But then, jazz was born on Earth. By the time We Travel the Spaceways was released, Sun Ra was an ambassador to other planets. Martians, Venusians, and denizens of distant spheres hear things differently. Some have more than two ears. Sun Ra was exploring new ways to communicate.

A few notes on the tracks:

Another version of "Interplanetary Music" appears on Interstellar Low Ways, recorded at a different session. The Spaceways take is delivered with greater gusto. The thin audio quality of this recording exists on the tape, and every released format of this track over a half-century reflects the same limited spectrum. The performance, however, more than compensates. (The rest of the album offers richer fidelity.)

"Eve" with its ternary counterparts paints a musical portrait of a beautiful, exotic temptress (perhaps luring Sunny towards a Big Apple). A version from a different session appeared on Sun Ra Visits Planet Earth.

"We Travel the Spaceways" also appeared on When Sun Comes Out, but from a different session.
Discographer Robert Campbell wrote: "The bizarre whirring and quacking heard at the end of 'We Travel the Spaceways' comes from a toy robot with flashing lights; John Gilmore [said] that around this time the Arkestra would release the 'robots' into the audience during their performances. The band also used mechanical 'flying saucers' as props."

"Tapestry from an Asteroid" also appeared on The Futuristic Sounds of Sun Ra, recorded later in New York by Tom Wilson and released on Savoy.

"Space Loneliness," a blues that veers towards crime jazz, also appears on Interstellar Low Ways, but this version picks up the tempo a bit.

“New Horizons” comes from the 1956 RCA studio sessions for Jazz by Sun Ra, produced by Tom Wilson and released on his Transition label.

"Velvet" (a different version appears on Jazz in Silhouette) is a reversion to hard bop, and points less to where Sun Ra was going than what he was leaving. Nevertheless, over the years Sunny would periodically return to his jazz roots. He never fully abandoned traditional forms, which were an intrinsic part of his musical soul.