Voice of the Eternal Tomorrow 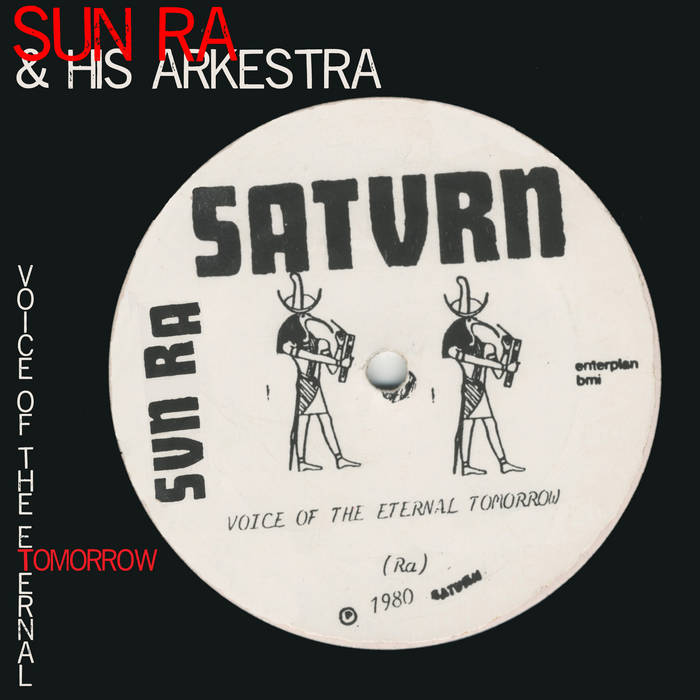 Voice of the Eternal Tomorrow is a rare slab of Saturn vinyl recorded and pressed in 1980. It offers an edited live performance of the Arkestra at New York's radical Squat Theatre. The album was also pressed and sold as The Rose Hue Mansions of the Sun, the title of one of three tracks included on the LP.

Squat was founded in Budapest by Hungarian dissidents in the 1960s. In the 1970s a number of Squat founders were expelled from Hungary, and these political exiles relocated to New York, where they re-established the theater in a cramped storefront at 256 West 23rd Street. Besides music, Squat was known for dramatic productions (from Chekhov to conceptual absurdism), which were staged in the theater's window overlooking the 23rd Street sidewalk.

From 1979 to 1982 the Arkestra gigged regularly at Squat; an unknown number of performances were recorded, a few released commercially in limited quantities with handmade covers. The Squat archives (at SquatTheatre.com) claim that Ra debuted there in August 1979 and performed on the premises 47 times, "to become our most frequent guest." The chronicle explains that "the fit between the Arkestra and the Squat Theatre was a natural one, as both were in essence creative communes."

The three works on this album are, as might be expected for the venue, on Sunny's radical side. The recordings are saturated with aggressive outbursts, explosiveness, and an air of confrontation and defiance. Judging from the applause, these performances were well-received. The recording fidelity is less than optimal, with distortion and a mediocre mix—but it's close enough for Garage Jazz. It could be argued that there's no way to adequately capture this orchestrated chaos in such a claustrophobic space. And yet, what remains represents history. The time, the space, the players will never again converge.

Ra performances at Squat sometimes included audience participation—one unintentionally comic incident is chronicled in John Szwed's Sun Ra biography Space is the Place. Szwed also recounts "two nights of [Arkestra] concerts with 100 musicians jammed into the tiny space, and in order to coordinate so many musicians Sun Ra rehearsed in shifts for 24 hours straight, with different musicians and instrumental sections one after another."

Personnel on this date had been erroneously identified in one authoritative discography, but Robert Campbell and Christopher Trent's The Earthly Recordings of Sun Ra (2nd edition) offers what is apparently a more accurate roster of participants, as follows: