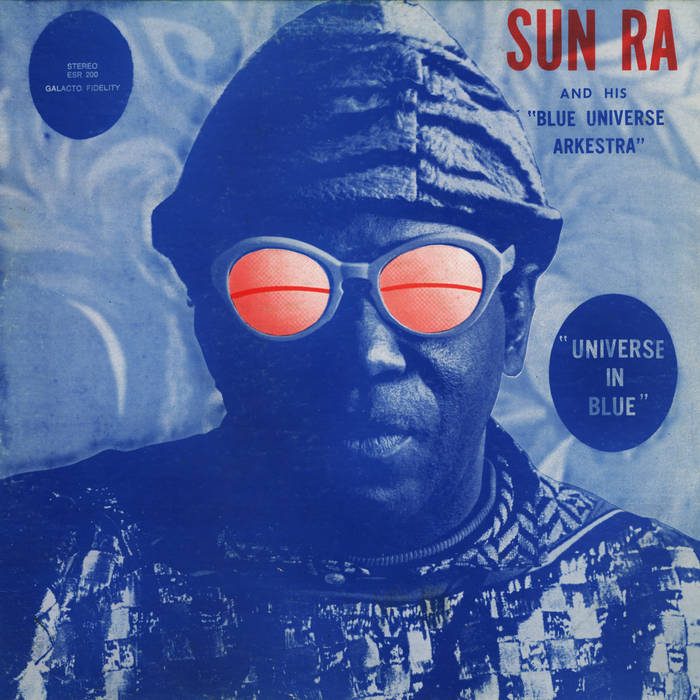 Universe in Blue is a rarity. This collection of undated live club performances was issued in small-run pressings with two different LP covers on Sun Ra's Saturn label around 1972, but has largely escaped further notice. It's never been reissued on LP, CD or (prior to this edition) digitally.

The performances originated in the early 1970s at the rowdy Lower East Side jazz mecca Slug's Saloon, located at 242 East 3rd Street. Starting in 1966 (or possibly as late as 1968), Sunny and his band performed at Slug's almost every Monday night for several years, and took the stage sporadically for several years thereafter. They typically started around 9:00 pm and played without a break until 4:00 am. The personnel fluctuated, depending on who showed up, who was hanging around and could handle an instrument, and the bandleader's divinations. These legendary evenings were raw, unpredictable, calamitous, and not without artistic controversy. They brought Sun Ra to the greater attention of the New York press and helped cement his reputation for audacious showmanship.

These recordings are not hi-tech; they were reportedly captured with a pair of microphones placed on or near opposite sides of the stage (resulting in a startling lo-fi stereo), and recorded on cassettes (many of which flagged Slug's as the venue). Considering this primitive set-up, the fidelity—excepting the final track—is quite good. These sonic artifacts provide an intriguing glimpse of the Arkestra's repertoire and virtuosity at the close of their first decade playing in New York.

The recordings on Universe in Blue originated on different nights, with different lineups. The set kicks off with the title track, a soulful, blues-based organ crawl by Sunny, which segues into trumpet and sax solos. This is after-hours music, with ritualistic undertones. On the LP, this track was inexplicably faded early, then resumed as "Part 2." The complete version is presented here as a single track.

"Calling Planet Earth - We'll Wait for You" is a previously unreleased sonic tapestry from the same tape as track 1. It's a labyrinthine 23-minute "space suite," full of bluster, unexpected dynamic twists, and a vocal centerpiece by June Tyson and the band. Tyson is showcased on "When the Black Man Ruled This Land" (titled "Black Man" on the LP), declaiming with fierce urgency over Sunny's space organ and percussion. "In a Blue Mood" is an extended Sun Ra keyboard solo of incredible depth, played with restraint, yet simmering with emotion.

Prepare yourself for the final track, "Another Shade of Blue." This relentless, 11+ minutes blues cooker is a wild ride. The audio clarity is terrible, the playing is awesome, and it's chock full of soul. "Another Shade …" conveys the feel of a 3 a.m. jam session in some smoky 1940s R&B roadhouse (in stereo!). The sound cannot be improved, but that's how it sounded on the LP. Fidelity aside, the spirit, intensity and chops are self-evident. Saxes wail, Sunny burns, the tape fades, with no indication of how long the jam continued. In an alternate cosmos, it might still be in progress.