The Spirit of Jazz Cosmos Arkestra at WUHY, 1978 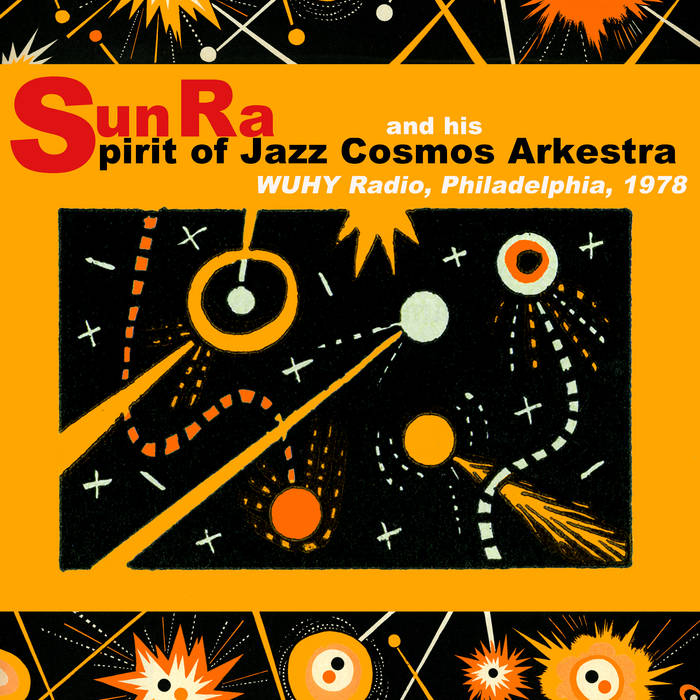 Lawrence Guest More radio broadcasts please! These are amazing. And the fact they are in Philly is a bonus.

Sun Ra's Spirit of Jazz Cosmos Arkestra—the only known use of this appellation in Ra's entire catalog—performed in concert at Philadelphia's WUHY radio studios in 1978, probably in July. WUHY producer Anna Mintz, in a voiceover introduction, called the show "one of the hottest things to happen here since Dick Clark and American Bandstand left town." (File under: Juxtaposition of Incongruities.)

Taped for a broadcast series called "All That Jazz," the concert was augmented with short excerpts of a Sun Ra interview in a voice-over-music format (it's dropped in at unpredictable spots). Copies of the tape have long circulated among Ra collectors in various incarnations—some seemingly complete, others abridged, some mislabeled, and a few with tunes oddly titled (e.g., "Ark Smooth Sailing," and "Drifting in D-Flat," neither of which are actual Ra titles). Some tapes in circulation are dated July 1978; others cite October. (July is commonly accepted.)

If you follow along in Campbell and Trent's The Earthly Recordings of Sun Ra (2nd edition, 2000), this is item #272. Most of the info is accurate, but we can clarify a few details. ER notes, "[An] unidentified altoist is definitely not Danny Davis or Pat Patrick; he has a notable blues feeling and is featured on 'The Shadow World' and 'Space Is the Place—and probably on 'Love in Outer Space' as well." ER speculated that it could have been Knoël Scott, who otherwise doesn't log a confirmed sighting in the Arkestra until one year later.

In her intro, Mintz identifies Arkestra members, and names Byard Lancaster on alto sax. (She neglects to mention tenor mainstay John Gilmore, who is provably on the date.) Lancaster is not listed in the ER credits for this date—in fact, he isn't listed anywhere in the book's musician index. However, Philadelphia-born Lancaster was prominent on the Philly jazz scene for years and a number of 2012 obits indicated that he played with Ra. The passing mention by Mintz had apparently been overlooked when this date was cataloged for ER. We pointed this out to Ra discographer Christopher Trent, who gave a fresh listen to the performance and reported back.

CT: "I’m convinced—it's Byard Lancaster on alto. I was immediately struck by the similarities to Byard’s sound on albums which I’d been listening to of late, in particular the 1979 'Documentation – The End of a Decade.' So, yes—the ‘unknown' alto solos on 'The Shadow World,' 'Space Is the Place' and 'Love in Outer Space' are, in my opinion, all Lancaster." Hence, this set contains the first—and thus far only—recorded instance of Lancaster as an Arkestran. Mintz also mentions a drummer named Ricky Joyce—another name that can't be found in Ra discographies. (We can't even find refs to the guy online, tho there's apparently a rock drummer with a similar name.)

Trent added: "Gilmore is indeed present on this gig. He has his customary featured solos on 'Lights on a Satellite,' 'Limehouse Blues,' and 'Christopher Columbus.' He's low in the mix for the first few, but better amplified on 'The Shadow World,' on which he takes the first solo—a high-register tenor, mostly unaccompanied—followed by Danny Davis, also ending unaccompanied, and then Lancaster."

The set features Sun Ra playing lots of acoustic piano. Though it was Ra's original instrument, in the mid-1960s he began incorporating more electronic keyboards, and gravitated towards any such device that came on the market (Minimoog, Rocksichord, Crumar Mainman, clavioline, Farfisa, Hohner Clavinet, etc.) through the mid-1970s. Historian Ben Young pointed out that after Ra relocated from New York to Philadelphia around 1968, he didn't have a piano in his house. However, while never abandoning electronic keys, Ra returned to the acoustic piano often in the second half of the 1970s, during which we find any number of solo piano recordings and live performances, as well as piano in the context of the Arkestra.

The WUHY date features Ra offering an extensive tribute to one of his musical heroes, the great (and much neglected) big band arranger Fletcher Henderson, with whom Ra had worked in Chicago during the late 1940s. Three Henderson staples are offered: "Limehouse Blues," "Christopher Columbus," and "Big John's Special."

On one circulating version of the tape, a track is identified as "Drifting in D-Flat." However, ER calls it "There Are Other Worlds (They Have Not Told You Of)," a work which appears on the 1979 album Lanquidity. The WUHY track sounds very different. However, the title was performed live by Ra quite extensively during this period, and he often developed radically new arrangements for existing works, occasionally to the point of rendering them unrecognizable. Trent provided some perspective: "I think this is 'There Are Other Worlds.' The riff played by the saxophones before Michael Ray enters on trumpet sounds to me the same as sung by ensemble voices at the start of this piece on Lanquidity."

We made some minor, largely inconspicuous digital repairs to the audio, but no processing, EQ, compression, reverb, or noise reduction were applied. The full broadcast (as preserved) is here, and the original performance sequence is intact. However, because digital tracks are often purchased separately and/or listened to out of context, we have omitted applause where possible for clean starts and/or ends. We have retained fade-in applause where Ra begins playing piano before the audience stops clapping, and retained it at the end of the Fletcher Henderson pieces because it's exciting to hear the immediate audience response after these explosive performances.

Funded in part by the Pennsylvania State Council on the Arts

Thanks to John Szwed, Christopher Trent, and Robert Campbell