by Sun Ra & His Solar-Myth Arkestra 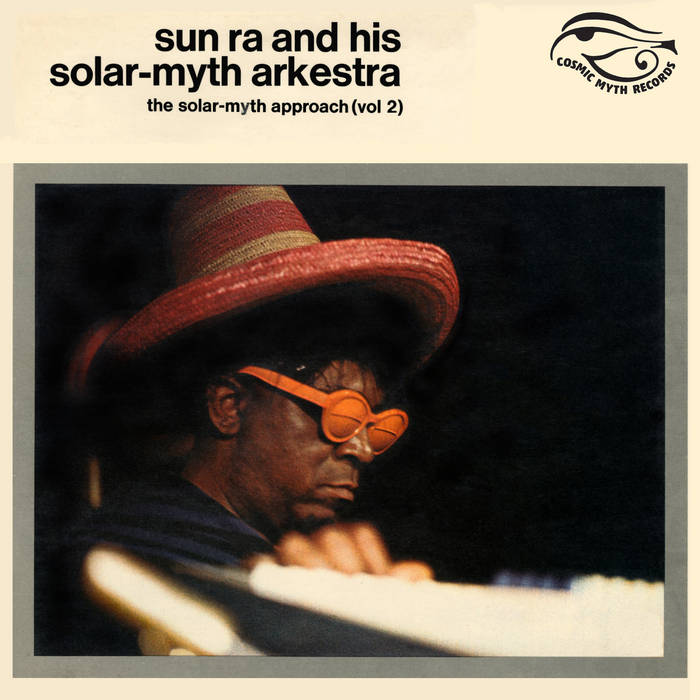 The Solar-Myth Approach was first issued in 1971 as a double LP set on the French BYG/Actuel label, then repackaged as two stand-alone volumes in 1972. Founded in 1967, BYG was associated with the maverick arts journal Actuel. The label issued dozens of fascinating and groundbreaking free jazz, experimental, and psychedelic releases before a seemingly abrupt—and controversial—late-1972 bankruptcy. The pot-head pixies in the band Gong recalled that "during the making of [our album] Flying Teapot in January 1973, the band learned that the record company had gone bust, its Paris office stripped bare, no phones working. The band was abandoned at the Manor Studios midway through the album." The label died without a lawful successor—but not without litigation and lawsuits.

Sun Ra had licensed or sold the Solar-Myth recordings to BYG. (The terms of the agreement are unknown because no copy could be located for review, but the distinction between license and sale has been rendered moot by subsequent events. It's even possible there was never a written agreement. See below.) In the absence of any valid successor label claim, rights to both Solar-Myth albums reverted to the artist (and later, to his heirs). However, through a series of subterfuges, a label that rose from the ashes of BYG, Charly Records, founded by one of the BYG partners, assumed ownership of countless BYG releases without any provable chain-of-title. BYG and Charly are separate and unrelated companies with one overlapping principal on their letterheads. It's possible (we're agnostic) that some artists who appeared on BYG were later signed to Charly. Gong wasn't. Neither was Sun Ra. Search online and you'll find allegations of impropriety against Charly for non-payment of royalties, false ownership claims, infringement, and illicit releases. Besides Gong, plaintiffs and accusers included Nina Simone, George Clinton, Ian McLagan, and MCA Records. A number of these complaints went to court. According to a well-known indie rocker, "At the 2005 Ponderosa Stomp in Memphis, Syl Johnson went on a tirade from the stage about Charly putting out his music without proper authorization. His rant was so hilarious that I felt compelled to purchase the Charly CD from the merch stand after his set."

Since the demise of BYG, the Solar-Myth Approach albums have been reissued without legitimacy in a series of ever worsening-quality packages in various formats. The Charly reissues were inferior to the BYG originals (and displayed different cover art), and a dreadful off-pitch, out-of phase 2-CD bootleg appeared on the Fuel label in 2001.

On a qualitative level, this 2020 Cosmic Myth remastering from best-available sources (tapes and discs) constitutes an upgrade. Are they perfect? Of course not—these are Sun Ra recordings. But countless audio flaws—some dating from the original sessions, others from careless mastering—have been repaired.

Style-wise, the albums are a grab-bag of tracks from various undocumented sessions in New York and Philadelphia in the 1960s, while some possibly date to the late 1950s when Ra and the Arkestra were based in Chicago. (Ra decamped to New York in 1960, and to Philly in 1968, though he continued to record in NYC at Variety Studios for years.) There are no specific session logs for these tracks, and an identical personnel roster appears on both Solar-Myth LPs. Ra was not a meticulous annotator of his own releases. Ever the cosmic jester, he was inclined towards fabrication and wanton "misdirection"; the listed players, dates, locations, even titles, are sometimes unreliable. (To paraphrase author Bob Mielke, "Sun Ra's not for real—he's for myth!") Ra scholars can generally identify players by style and estimate recording years and determine location by sleuthing the revolving membership of the Arkestra; in addition, arranging techniques, instrumentation, title copyrights, concert itineraries, and studio atmosphere offer clues.

As with many albums compiled by the bandleader from disparate sessions, there's something on the Solar-Myth albums for every Ra fan to love—and some things that casual fans will find less "lovable." As we've noted before, with Sun Ra you get everything but consistency and predictability. The Solar-Myth tracks careen to extremes, styles are juxtaposed in a non sequitur fashion, and audio quality fluctuates. For a Sun Ra album, this qualifies as "cohesive." Some titles have entered the Ra canon (e.g., "Satellites Are Spinning," "They'll Come Back" "Outer Spaceways Inc."), while others appear here and nowhere else (e.g., "Realm of Lightning," "The Utter Nots," "The Adventures of Bugs Hunter").

"Interpretation" presents another delightful Strange Strings session, recorded in spacious and spacey stereo. Sadly, the fragile instruments were destroyed when the Arkestra's van careened off the road on the way back from their second trip to California in 1969, making this the last known recording of Ra's own "scratch orchestra." Up next is a ponderous re-make of "Ancient Ethiopia" (originally titled "Ancient Aiethopia" on the 1959 Saturn LP, Jazz in Silhouette), with Allen musing on low-register flute and Ra scattering chords around the piano's tinkling, uppermost range. Volume 2 ends with "Strange Worlds," a live recording from around 1969 or 1970. Ra's organ and Akh Tal Ebah's "space dimension mellophone" conjures up a spooky atmosphere and the music moves through various moods and feelings leading up to Tyson's solemn declamations regarding the strangeness of the world. Suddenly, big, high-tension space chords unleash torrents of squalling horn solos, Ra furiously assaulting the Gibson Kalamazoo with his fists and elbows. Then, everything stops cold. Is it live or a deft edit? Either way, it's a powerful conclusion to another mind-blowing album.
[/COLEMAN]

The BYG LP annotation for both volumes asserts that this material was "Recorded at the Sun Studios, New York, 1970–71." Don't believe it. Robert L. Campbell and Christopher Trent, in the massive Ra discography, The Earthly Recordings of Sun Ra (2nd ed., publ. 2000), date the earliest tracks to 1967 and the latest to 1970. Their range is more believable than Ra's characteristic trickery, yet they added a disclaimer: "Most of the material is obviously from New York and was recorded in 1967-1968 (some items could be even earlier). A few tracks came from the early Philadelphia period, 1969-1970. The collective personnel provided on the BYG releases was used as a guide, but trumpet and trombone credits (as usual for this period) needed correcting, Tommy Hunter was not credited on drums, and Ra's Clavinet was misspelled 'clarinet'."

Note the caveat: "some items could be even earlier." How much earlier?

Michael D. Anderson of the Sun Ra Music Archive believes (and we concur) that "They'll Come Back" (from Vol. 1) and "Ancient Ethiopia" (from Vol. 2) were recorded either in Chicago, or at the Choreographer's Workshop in the first years after Ra settled in New York. Compared to everything else on the Solar-Myth Approach, the tight arrangements of "They'll Come Back" and "Ancient Ethiopia" are outliers. They do not sound like anything Sun Ra produced in the late 1960s—but they do sound comparable to his arrangements from the late 1950s and early 1960s.

Other versions of "Ancient Ethiopia" appear on the albums Jazz in Silhouette (titled "Ancient Aiethopia"; recorded late 1958, issued 1959) and on The Nubians of Plutonia (titled simply "Aiethopia"; recorded ca. 1958–59, possibly before the Jazz in Silhouette version, and issued ca. 1966). Except for its inclusion on Solar-Myth, the tune seemingly disappeared from Ra's repertoire after he left Chicago. He neither recorded nor performed it ever again—although the Solar-Myth version, which is undated, could be an exception. Campbell, 2019: "I don’t think Sunny would have given the intro to the S-MA version of 'Ethiopia' to [bassist] Ronnie Boykins in Chicago, and I don’t think it would have sounded quite like this if he had. The drumming’s not what we would hear on a Chicago performance, either. Not having two baritone saxes, Sunny had to use another low wind instrument. I still hear a bass clarinet on the track (check the ending); with John Gilmore leading the saxes on tenor, that says Robert Cummings was in the area. The sonics are dingy, which makes the Workshop likely."

Anderson also believes that "Realm of Lightning" (Vol. 1) and "The Utter Nots" (Vol. 2) originated at Choreographer's, in 1962 and 1964 respectively. These sessions produced tracks which were issued on the Saturn albums Art Forms of Dimensions Tomorrow, and Cosmic Tones for Mental Therapy. This material is pivotal in Ra's evolution away from the conventions associated with "jazz" and towards something more idiosyncratic and unclassifiable.

The historical context of two other tracks merit reevaluation. The solo Moog synthesizer tracks "Seen III, Took 4" (Vol. 1) and "Scene 1, Take 1" (Vol. 2) are listed in The Earthly Recordings as being performed on a Minimoog. Ra acquired a Mini prototype in 1970—the year the instrument was developed—from Bob Moog himself and took it on tour. The prior year Ra had visited Gershon Kingsley's New York studio and recorded on Kingsley's modular Moog; those recordings were issued on Saturn in 1970 as the album My Brother the Wind. We asked Brian Kehew, a Moog historian (who wrote liner notes for the 2017 deluxe reissue of My Brother the Wind), to review the two Solar-Myth tracks and identify which instrument Ra played. His reply: "Sure sounds UN-like a Minimoog and VERY like the modular system. Ra plays a wider range on the keyboard than you could on a Minimoog. It's the longer keyboard of the modular system." As it turns out, on both volumes of Solar-Myth, Ra credits himself with playing "Moog synthesizer" — not the Mini. So in this one instance, it seems Ra was on the level.

But that's not all. According to Anderson, "Scene 1, Take 1" was recorded at the tape speed of 3-3/4ips, but for the original BYG LP it was—for reasons unknown—played back at 7-1/2ips. Hence, that track has always been heard at double speed. If you listen closely, at two seconds in there's a momentary voice which is clearly sped-up. The 3-3/4ips tape is too fragile for Anderson to run, but Kehew was able to convert the digital file to true speed. On this version, at four seconds in, you can hear the voice of Sun Ra at normal pitch. It's conceivable that Ra made the creative decision to speed up the piece for the album—although we cannot rule out engineer error. At any rate, here the original LP version remains as track #3 in the Vol. 2 sequence, and the true-speed version, which reflects what Ra's hands actually played, has been included on this remastered digital edition of Vol. 2 as a bonus track.

POSTSCRIPT: In a 2019 conversation, Ra historian/authority John Corbett explained that when Sun Ra and the Arkestra toured in the late 1960s and '70s, the bandleader often lugged along a cumbersome tape deck and a suitcase of open-reel tapes, which he would review during leisure time on the road. These tapes were a smorgasbord of styles, sessions, and band configurations from random periods in Ra's recorded history. According to Corbett, in several highly likely instances during overseas tours, Ra needed funds for return airfare or travel expenses, and would sell such tapes (or copies thereof) to European labels—a quick hand-off deal. Tape documentation could be scarce-to-non-existent, which would prompt labels to guess dates, titles, and personnel, or rely on skimpy (or fabricated) info provided by Ra. It's highly possible that BYG acquired the Solar-Myth tapes in this fashion. If so, it increases the likelihood of "engineer error" causing the incorrect speed of "Scene 1, Take 1," as well as explaining the incongruous stylistic mix of these two albums.

Personnel (some known, some speculative) for both volumes: