The Nubians of Plutonia 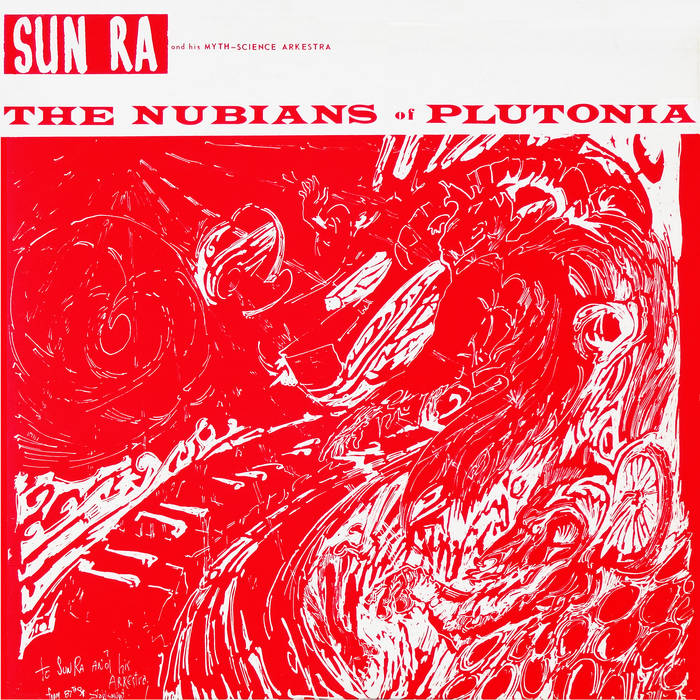 whyfisucks. Another album of what has become my favourite period of Sun Ra's discography, demonstrates how timeless Ra's works are - right before he launched so far ahead of time that the rest of the world will be catching up far into the future. Favorite track: Aiethopia.

The Executioner from Turandot

Originally titled The Lady With The Golden Stockings (released 1966), The Nubians of Plutonia (as it was retitled in the ca. 1967-69 reissue) was compiled from tracks recorded in Chicago in 1958 and 1959. Sunny was still in his Space Bop phase, although mystical overtones begin radiating through the jazz. The revised album title cleverly juxtaposes ancient Egypt with outer space—the primitive with the futuristic, characteristics reflected in the compositions and arrangements. The album is redolent with percussion, often played by Arkestra brass or reed players providing a simple, quasi-Latin or African rhythmic foundation behind solos. (Having everyone in the band play percussion remained a longstanding Arkestral tradition.)

Like dozens of Sun Ra tracks recorded in Chicago in the late 1950s, this material was released in the late 1960s (long after Sunny had left Chicago) on the Saturn label, and reflected musical styles Sunny had long since transcended (but never abandoned).

These Saturn LPs were pressed in limited quantities and sold at Arkestra concerts, many of which presented new material radically at odds with the post-swing and hard bop contained on the vinyl. These LPs were also distributed by mail order and tucked in the bins of independent record stores who could get their hands on stock.

Some tracks on Nubians echo the then-prevailing Exotica aesthetic of Martin Denny, Arthur Lyman and Les Baxter (the latter a personal favorite of Sunny—see the Modern Harmonic 2017 compilation EXOTICA). "The Golden Lady" (a.k.a. "The Lady with the Golden Stockings) features an exquisite alto solo by James Spaulding. "Watusa" (a.k.a. "Watusi") became a staple in the Arkestra repertoire. "Aiethopia" is a remake of "Ancient Aiethopia" (Ethiopia), which appeared on Jazz in Silhouette.

Also included on this digital edition are four unreleased stereo recordings from the period: "Images In A Mirror" (different from the version on Jazz in Silhouette), "Ankhnation" (a.k.a. "Ankhnaton"), "Spontaneous Simplicity," and "Black Sky and Blue Moon," which features an unknown vocal ensemble (see personnel notes below).

Research herewith on vocal ensembles for tracks 5 and 11, variously identified by historians as The Nu Sounds or The Cosmic Rays: These groups are not the same ensembles, nor do they have overlapping members. The actual vocalists on these tracks might not be either group (the original Saturn LP back cover says "Arkestra" on "Africa"). Lacking session logs, any identification of vocalists on these tracks is speculative. The vocalists on "Black Sky" are unknown and could have been overdubbed at a date later than the original recording.