The Night of the Purple Moon 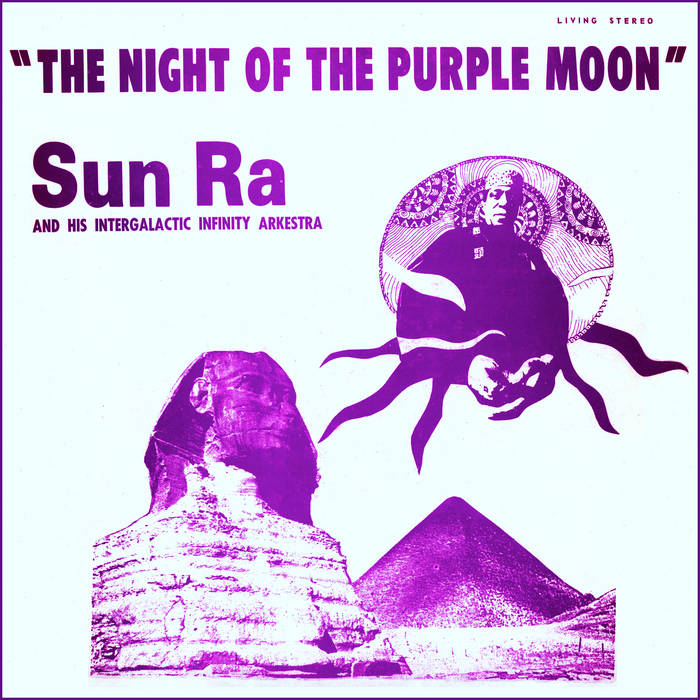 The Night of the Purple Moon, recorded and released in 1970, has a vague flavor of the prevailing psychedelic zeitgeist of the late 1960s. That's due to the presence of two electronic keyboards that were popular with psych bands: the Rock-Si-Chord (commonly misspelled Rocksichord) and the Minimoog.

The former, built by Rocky Mount Instruments and first sold around 1967-68, was used by rock bands as a louder stand-in for the harpsichord, which could not compete against high-decibel electric guitars. (The Rock-Si-Chord was also famously showcased on Terry Riley's 1968 tour de force A Rainbow in Curved Air.)

Ra owned an early custom Minimoog (a portable Moog synthesizer), and had previously featured (pre-Mini-) Moog modules on My Brother the Wind Vol. 1, recorded in 1969. Ra would use the Minimoog on several more recordings, including the magnum opus "Space Probe," and tour with it for several years. Unlike many recording artists at the time, Ra was not interested in using innovative instruments to frame familiar pop songs; he wanted to explore the sonic possibilities with futuristic music. Ra often treated the Minimoog brutally, wrenching from it exotic textures and distorted blasts at Richter-level magnitudes. Bob Moog invented the Minimoog. Sun Ra reinvented it.

However, listening to Purple Moon, one gets the sense that after a decade of experimentalism and free jazz, Sun Ra wanted to make an accessible pop record. What he came up with is not Iron Butterfly, but had this record been properly marketed, it could have appealed to a segment of that band's market. If one-tenth of those who bought In-A-Gadda-Da-Vida purchased Purple Moon, Sun Ra would have reached the lower rungs of the Billboard charts.

Despite his predilection for making new music with new instruments, Sunny was not above offering "cover versions" of his own tunes: Purple Moon featured a remake of "Love in Outer Space," first recorded in 1962 and initially released in 1965 on Secrets of the Sun. The tune eventually became a Sun Ra "standard," with over 150 recorded versions in Ra's vast catalog. In addition to the Purple Moon LP version, we have included the 1975 vocal version, featuring singer David Henderson (also in his only recorded performance with Ra), and an alternate take. The title track is offered here twice: the original LP version and a previously unreleased alternate take. Unlike "Love in Outer Space," these are the only two known recordings of "Night of the Purple Moon."

The album contains three electronic solo works, "Blue Soul," an old-fashioned torch song with space-age shimmer; "Narrative," a choppy, yet propulsive work that seems less a composition and more a keyboard test-drive; and "Outside the Time Zone," a bluesy romp that flirts with atonality. These three tracks were cited by Ra historians as having been performed on the Minimoog. However, Moog historian Brian Kehew disagrees: "They sound like an organ or some other electronic keyboard, but not like a Moog."