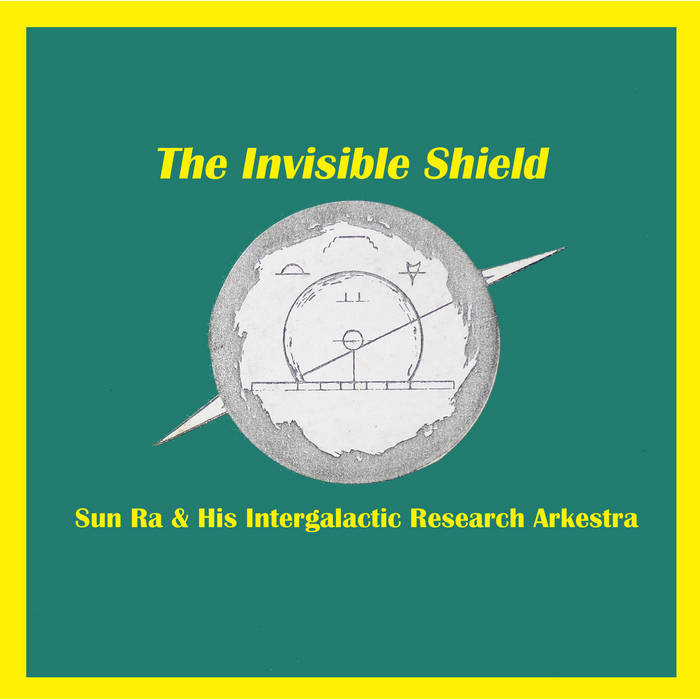 On The Invisible Shield, you get two (maybe even three) Sun Ra's for the price of one. Although many fans admire everything the maestro produced, some prefer his idiosyncratic take on jazz forms, while others thrill when Sunny dispenses with tradition and transmits killer sound waves from space. The Invisible Shield has something for both camps. There's big-band swing, propulsive hard bop, lounge jazz, and hypnotic Latin exotica. The counterpoints are lease-breaking skronk, destabilizing electronic alchemy, and pan-galactic sonic emissions.

The Invisible Shield is an extremely rare LP. It was never officially released on El Saturn (tho it did have a catalog number—529), and just a few hundred LPs were pressed around 1974 and sold at concerts. It never even had a standardized, printed cover—each copy was hand-designed. Several tracks appeared on such other releases as Janus, What's New, Satellites Are Outerspace, and A Tonal View of the Times.

The A and B sides of the LP traced a mind-scrambling excursion from Earth to Elsewhere. The first side offered rowdy, early 1960s post-bop renditions of Tin Pan Alley favorites arranged for quartet (2) and quintet (3, 4, 5, 6), along with a well-crafted original, "State Street," for full band—a fairly mainstream outing by Arkestra standards. Side B opened with a locked-in Latin groove ("Island in the Sun"), before segueing into two jarring and uncompromising electro-acoustic soundscapes, probably recorded five years apart.

There's no stylistic bridge between the material. Sun Ra fans of the period were accustomed to new albums which were in fact compilations of older, previously unreleased material, often from different, unrelated sessions. The common denominator was the bandleader, who saw no need to stylistically unify the product. These albums were like samplers: Try this (hard bop), and if you like it, you might also like this (lunar beeps) by the same artist.

This remastered edition includes one unreleased track ("But Not For Me"); three stereo tracks ("Time After Time," "Easy to Love," and "Sunny Side of the Street") which had appeared in mono on the LP; and the full ten minutes of "Island in the Sun" (only half of which appeared on the LP).

If you're fond of hyperactive kick drums, the explosive Clifford Jarvis is in the house. Few tape decks were able to withstand his thunderous pedal action, as evidenced on tracks 3 thru 6, and his well-timed bombs no doubt jolted many a turntable stylus.

All titles composed by Sun Ra © Enterplanetary Koncepts (BMI)
except:
"Sometimes I'm Happy" (Caesar-Youmans-Grey)
"Time After Time" (Cahn-Styne)
"Easy to Love" (Cole Porter)
"Keep Your Sunny Side Up" (Henderson-Brown-DeSylva)
"But Not For Me" (George Gershwin-Ira Gershwin)