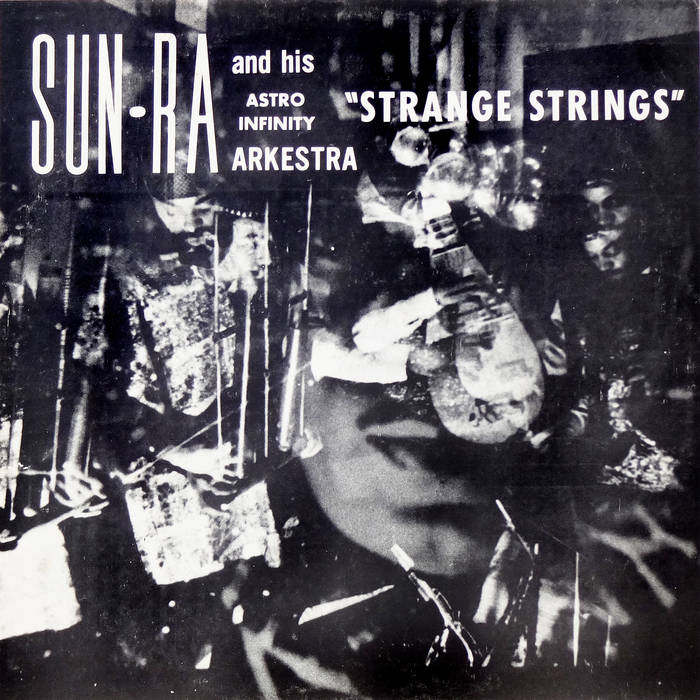 Fans of Sun Ra's Hard Space Bop and blues-based swing were in for a shock with Strange Strings (recorded in 1965—often erroneously reported as 1966—and released in 1967). This is an album without a genre, and demands an adventurous aesthetic on the part of the listener. Even in the eclectic and extensive Sun Ra catalog, Strange Strings stands alone.

After a series of concerts at upstate New York colleges, Sun Ra purchased an arsenal of stringed instruments from curio shops and music stores on the road: ukulele, mandolin, koto, kora, Chinese lutes, and what he termed "Moon Guitars." In the studio, these were handed out to his reed and horn players in the belief that "strings could touch people in a special way." That the Arkestra members didn't know how to play these instruments was not beside the point—it was the point. Sun Ra called it "A study in ignorance." To this unconventional "string section" he added several prepared homemade instruments, including a large piece of tempered sheet metal on which was chiseled the letter "X." Art Jenkins was assigned intermittent improvised vocals.

Biographer John Szwed explains what happened next: "Marshall Allen said that when they began to record, the musicians asked Sun Ra what they should play, and he answered only that he would point to them when he wanted them to start. The result is an astonishing achievement, a musical event which seems independent of all other musical traditions and histories. The music was recorded at high volume, laden with selectively applied echo, so that all of the instruments bleed together and the stringed instruments sound as if they, too, were made of sheet metal. The piece is all texture, with no sense of tonality except where Art Jenkins sings through a metal megaphone with a tunnel voice. But to say that the instruments seem out of tune misses the point, since there is no 'tune,' and in any case the Arkestra did not know how to tune most of the instruments."

The original LP version of Strange Strings was monophonic, contained three tracks, and suffered distortion in the mastering (perhaps due to the high-decibel studio performance and excessive reverb). However, at least part of the session was captured in stereo, and at least eight tracks were recorded (not including rehearsals), six of which are included on this remastered edition. No track titles appeared on the original Saturn LP cover, but the three released works were later identified as "Worlds Approaching," the LP title track, and an inversion of the title, "Strings Strange." However, the master tape box indicates the third title as "Strange Strange," the title we have used in this collection.

The LP track "Worlds Approaching," originally released in mono, appears here in clear stereo for the first time. Although there is no date on the previously unreleased "Thunder of the Gods" (found on a different tape, in mono), the style points to this work having been recorded around (and possibly even at) the same time, as the approach is identical to the Strange Strings concept.

The previously unreleased tracks "Cosmos Miraculous" (featuring Sunny on Clavioline) and "Moonshots Across the Sky" were discovered on other tapes (in mono), and also reflect the exploratory Strange Strings instrumentation. The bonus tracks complement this collection perfectly. There remains enough unreleased rehearsal material for another volume. Cosmic Myth Records plans an expanded 2-LP edition in 2018.

The stereo tapes for the tracks "Strange Strings" and "Strange Strange" could not be located, and while we had to rely on the poorly mastered LP versions, we have succeeded in rectifying some of the sonic flaws of the original pressing.