Space is the Place: Music for the Film 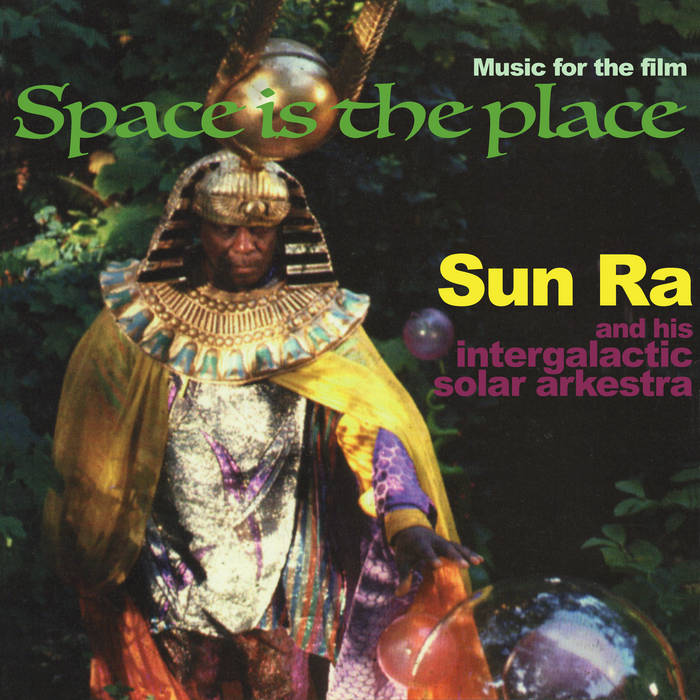 Call it what you will—Blaxploitation flick, Afrofuturistic science fiction, low-budget surrealism, Black-power manifesto—SPACE IS THE PLACE is the only film written by, scored by, and starring Sun Ra. Directed by John Coney, produced by Jim Newman, filmed in 1972, and released in 1974, it remains an iconic part of Ra's deeper cultural legacy and a touchstone for his fans. In too many cases, the title (also the title of an unrelated 1973 album on Blue Thumb) is the only thing uninformed Earthlings know about Sun Ra. It has become the Ra ur-cliché, a not-so-secret handshake. If all you know about Sun Ra is "Space is the Place," you don't know Ra.

Despite being called as much in its original 1993 issue, this album is NOT the soundtrack of SPACE IS THE PLACE. This is the music that was recorded by Sun Ra & His Intergalactic Solar Arkestra FOR the film. Most of the music on this album is not heard in the film except in short excerpts, and there's music in the film which is not on this album. Hence, this is not a soundtrack album. It's a first-rate Sun Ra studio album that stands on its own, apart from the film.

The film was produced while Ra and his entourage were based in Oakland CA. The bandleader booked a recording session at an unidentified studio originally thought to be in that city. However, Jim Newman told Sun Ra discographers Robert L. Campbell and Christopher Trent that the studio was “on Connecticut Street at the foot of Potrero Hill in San Francisco." The album features a mix of reworked Ra evergreens (e.g. "We Travel the Spaceways," "Satellites Are Spinning," "Watusa," and "Love in Outer Space") as well as tracks used in the film and appearing nowhere else (e.g. "The Overseer," "Cosmic Forces," and "Mysterious Crystal").

Singer/dancer June Tyson offers sparkling lead vocals on "Outer Spaceways Inc.," "Satellites Are Spinning," and "We Travel the Spaceways," as well as impassioned declamations on "Black Man." John Gilmore, one of the greatest tenor saxophonists of his generation, largely served as drummer on these sessions. Ra provides his customary cosmic pyrotechnics on a battery of electronic keyboards.

These tracks were first issued on CD in 1993 by Evidence Records; the package was subtitled "Soundtrack to the film" and featured different cover art. That CD is long out of print, but can be purchased on the secondary market. The contents of the album were issued on LP by Sutro Park in 2010, and they created new cover art. (So did we.) Yet another CD edition was included (along with a DVD of the film) in the 40th Anniversary coffee-table book published in 2014 by Harte Recordings.

The audio for this digital release has some minor improvements over the Evidence and Harte CDs (including the reduction of 60Hz electrical hum during quiet passages), but the respective editions are largely comparable. Wherever the tracks were originally recorded, they were well-recorded. However, according to Jim Newman, the original master tapes were destroyed in a studio fire. All that remains is a quarter-inch stereo mixdown tape.

The film SPACE IS THE PLACE was produced by Jim Newman, directed by John Coney, and written by Sun Ra and Joshua Smith

Cover photo from the film, adapted for digital release by Irwin Chusid

Issued under license from Jim Newman