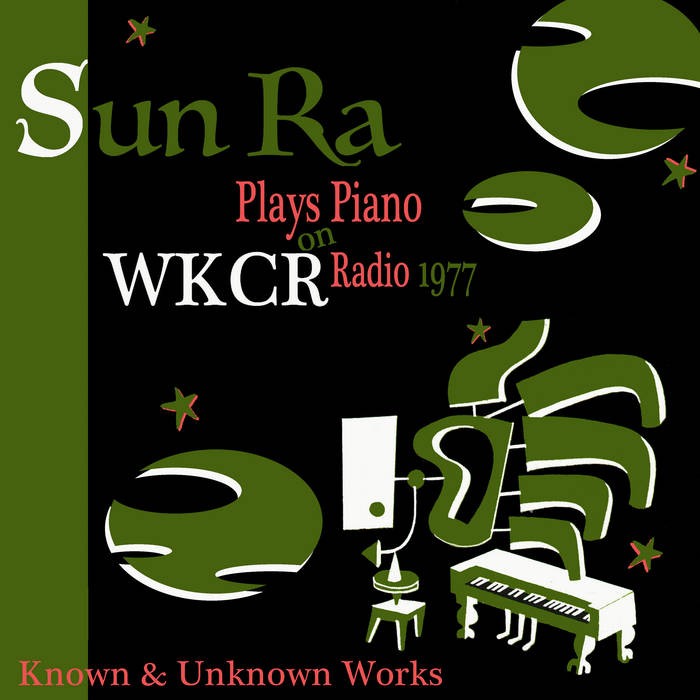 This set of Sun Ra solo piano works was performed and broadcast at WKCR Radio, on July 8, 1977. WKCR, the largely student-run station of Columbia University, has a decades-long tradition of fine jazz programming. During Sun Ra's career, he made so many appearances at the station that he probably had a front door key. Sometimes he performed (with or without members of the Arkestra), other times he would present rare and unreleased recordings. This solo piano set was rebroadcast several times over the years, and is documented in The Earthly Recordings of Sun Ra (Robert L. Campbell and Christopher Trent, 2nd ed., 2000), entry #252.

The nine tracks feature three standards, two titled Ra originals, and four impromptu untitled pieces. To distinguish the unnamed works from countless other untitled Ra performance works (and for purposes of publishing registration), we have assigned titles based on Rodger Coleman's 2013 review of this set in his comprehensive Sun Ra Sundays blog series. The unnamed works are now designated "Bluesy Improvisation," "Another Improv Blues," "Agitated Ostinato in Seven," and "Two-Chord Vamp."

There were very few solo piano albums issued by Ra during his lifetime. On his own Saturn label, there were two volumes entitled Monorails and Satellites issued in the late 1960s (a third volume was posthumously discovered and issued with a 2019 reissue of volumes 1 and 2). Aurora Borealis, recorded in 1980, was issued in 1981. Two solo piano albums (one studio, one live) were issued on Paul Bley's Improvising Artists label in 1977-78.

There is a historic trajectory. In the mid-1960s Ra had begun playing more electronic keyboards in concerts, on club dates, and in the studio. For a decade his work was dominated by Minimoog, Rocksichord, Crumar Mainman, Clavioline, Farfisa, Hohner Clavinet, and other electronic instruments—with a de-emphasis on piano. In fact, after Ra moved from New York to Philadelphia around 1968, he no longer had a piano in his house.

However, in addition to Aurora Borealis and the two Improvising Artists releases, a number of recordings of late 1970s solo piano gigs have posthumously emerged, reflecting a return by Ra in this period to acoustic piano (his original instrument). There's a date recorded in Venice in 1977 (issued on CD on the Leo imprint and reissued digitally on our Enterplanetary Koncepts label), and a set of undetermined origin recorded at a Minnesota club around 1978 (slated for digital release). Adding this WKCR session to the catalog reinforces the impression that during the late 1970s, Ra occasionally seemed inclined to take a break from performing and recording with the Arkestra to go it alone, often on acoustic piano.

That said, Arkestra mainstays John Gilmore and June Tyson join in (somewhat off-mic) accompanying Ra on vocals on track #8, "Trying to Put the Blame On Me" (a.k.a. "Blame Shame").

This session has been circulating for years among Ra collectors, with varying fidelity and altered track sequences. The audio is far from ideal. Coleman laments "the hiss and crackle inevitably associated with low-watt radio broadcasts of the era." Yet for an ad hoc Sun Ra capture—especially compared to dozens of unauthorized low-grade Ra bootlegs—it's quite good (Coleman agrees). This digital release offers a modest upgrade, as artifacts have been removed, dropouts repaired, distortion lessened, hiss reduced, and other flaws fixed or minimized. There's some residual hiss, as befits a 1970s analog recording, and some ghostly high-end sonic artifacts which could not be completely removed without loss of brightness.

The final track, "Quest," was issued in 1982 on a 7" single (Saturn Gemini 1982Z), strangely credited to "Sun Ra & His Outer Space Arkestra." It was twice reissued: on Sun Ra — the Singles (Evidence, 1996) and Sun Ra Singles: The Definitive Collection (Strut, 2016). In all three cases, the audio was marred by tape flutter and wavering pitch. For this digital set, we obtained a superior transfer of "Quest" which tracks relatively in pitch.

Rodger Coleman's 2013 Sun Ra Sundays take on this session is worth quoting at length (with minor edits):

Starting off with bluesy improvisation, it’s sadly apparent that WKCR’s piano had seen better days: it’s out of tune, some of the keys are sticky, and the voicing is wildly inconsistent, dull and indistinct at one moment, shrill and piercing at another. But Ra makes the best of it, exploiting the weird resonances and at times making it sound like a funky clavinet or electronic Rocksichord. Although apparently improvised, there is an elegant structure, with a contrasting, “classical”-sounding middle section, complete with delicate trills and impressionistic arpeggios. The old stand-by, “St. Louis Blues,” is up next and it’s another barn-burning performance: three, four, five independent voices ringing out simultaneously in wildly swinging counterpoint. Ellington's “Sophisticated Lady” follows and it’s given an oblique, fractured reading, with radical, pantonal re-harmonizations and some astonishingly intricate passage work—check out Sonny’s ultra-dexterous left hand! Another blues improv again brings out Ra’s brilliantly orchestral pianism with nimble bass riffs and thrilling horn lines, his two hands amiably wandering through distant keys.

After that virtuosic display, it seems Sonny is just getting warmed up! An untitled original pits an agitated ostinato in seven against skittering right-hand flourishes and beautiful block-chord harmonies. The stuttering bass-line almost sounds familiar, but I can’t quite place it. “Take the 'A' Train” is a ruminative extrapolation on an old favorite, blithely dispensing with the clichéd familiarity and nostalgic sentimentality associated with this well-worn warhorse. His explorations of low-register tone clusters and fiery single-note runs easily rival the intensity of Cecil Taylor at his most bombastic—but no matter how “out-there” it might sound at times, Ra deftly brings it back around to the ragtime and swing which form the basis of jazz. The vast expanse of African American musical history, from emancipation through the avant-garde, is seemingly encapsulated in this four-minutes-plus version of “Take the 'A' Train.”

Another unknown title follows: a two-chord vamp with pretty right-hand melodies, a space-rhumba feel that gradually morphs into straight-ahead swing before going out. Although dreamy and eminently enjoyable, it feels more like a sketch for a potential Arkestra arrangement than a fully-fleshed composition.

“Trying to Put the Blame on Me” is a doleful, two-chord vamp over which Sonny starts to sing. There is no microphone near his mouth, so at first you can barely make out what he’s saying. But there are other voices in the background, faintly echoing Ra’s declamations: June Tyson and John Gilmore. The station engineers frantically move around mic stands and the song eventually starts to coalesce, a darkly paranoid indictment of those who would blame Sonny for … what? I’m not sure. “What’s the name of this game?,” he asks. “Cuz if I’m the cause of it all, then that makes me the boss.” Whatever it is, he sounds eager to assume the role. According to Campbell & Trent, “Trying to Put the Blame on Me” would reappear almost ten years later at a concert in Cambridge, Massachusetts on June 10, 1986 (p.491-492). Surely, this song was performed at some point in the intervening years—or perhaps not? Maybe the subject of this diatribe was so specific, it only needed performing once in a while.

The last track was deemed good enough to appear on a 1982 Saturn single titled "Quest." It's a short but intriguing tone poem, with jagged, irregular melodies, Morse code rhythms and brittle, uneasy silences.

Sonny’s performance here is extraordinary, combining the contemplative meditations of a studio session with the dazzling technical displays of a live concert. Sun Ra was not just a great composer and bandleader, he was a fluent pianist and the living embodiment of a deep-rooted tradition dating back generations, a fact that sometimes gets lost in all the big-band hoopla and space-age gobbledygook. Here's proof.