Secrets of the Sun 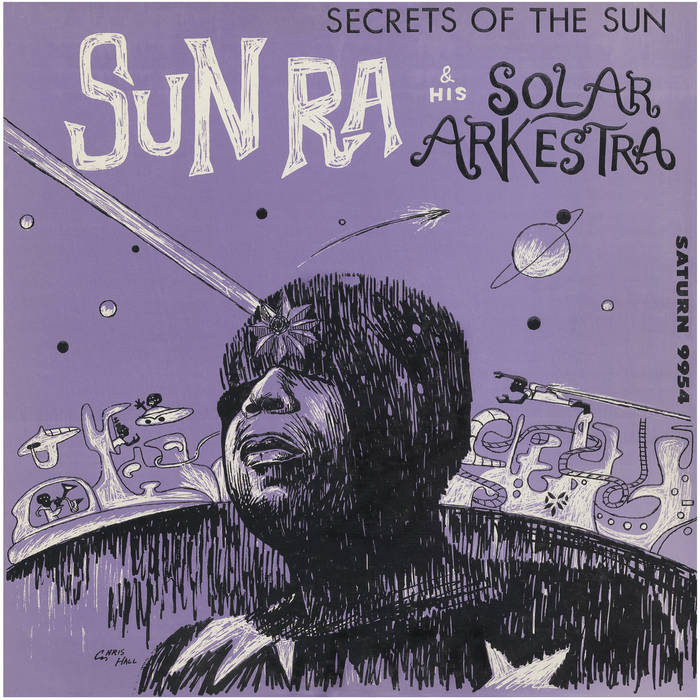 Secrets of the Sun is one of many Sun Ra albums which originated from sessions at the Choreographer's Workshop, a West 51st Street venue which served as the Arkestra's rehearsal space from roughly 1962 to 1965. The band rehearsed there endlessly, and more often than not an open-reel tape deck was running. These sessions produced tracks which (without organizing logic) achieved first commercial release on Saturn LPs throughout the 1960s and '70s. (Many unreleased tracks are first appearing on these post-2014 "Sun-tennial" digital remasters.)

Secrets of the Sun was recorded in 1962, but didn't appear on Saturn vinyl until '65. Per what had long been the bandleader's trademark, many titles point to destinations beyond Earth's stratosphere, while paradoxically echoing rhythms and forms inspired by Africa. And in what was a recurring motif of the Choreographer's milieu, the recordings themselves have a raw quality, replete with warehouse acoustics, distortion, erratic mic proximity, and a limited frequency spectrum. It's garage jazz. As on many of the Workshop sessions, drummer Tommy Hunter served as recording engineer, and his proto-psychedelic reverb saturates a few of these performances.

The album features an arsenal of percussion, often in the hands of Arkestra horn players, reinforced by the thumping bass of Ronnie Boykins. Sun Ra's developing Afrocentric consciousness inspired many of these relentlessly thunderous grooves. Despite the sustained pounding, there is a sparseness to most arrangements, fewer instruments in the mix, with piano often serving as counterpoint to the rhythmic clatter. It's less an orchestra than an expanded combo. There are few "genre" works on Secrets, and much less of what was conventionally considered "jazz" during Sunny's Chicago roost. New York, the artist's recently adopted hometown, was serving to liberate the composer's imagination.

Secrets marked the debut (on "Solar Differentials") of idiosyncratic vocalist Art Jenkins, who thereafter appeared sporadically on Saturn albums (and beyond) in cameo roles. As recounted in John Szwed's bio Space is the Place, Jenkins auditioned for Sun Ra as an R&B singer, but the bandleader rejected him because he wanted a singer who could achieve the "impossible." "The possible has been tried and failed," Sunny told Jenkins. "Now I want to try the impossible." Jenkins eventually chanced upon the technique of singing into a backwards ram's horn, creating a human wah-wah. "Now that's impossible," said Ra, and Jenkins got the gig as "space vocalist." Calvin Newborn's electric guitar on the opening number is a fresh sound; the band rarely worked with guitarists during this period. Several of these tracks — "Friendly Galaxy" and "Love in Outer Space" — became concert staples in years ahead.

This remastered edition contains the premiere release of the full "Reflects Motion" three-part suite, and one previously unreleased track from the session tapes, "Project Black Mass."