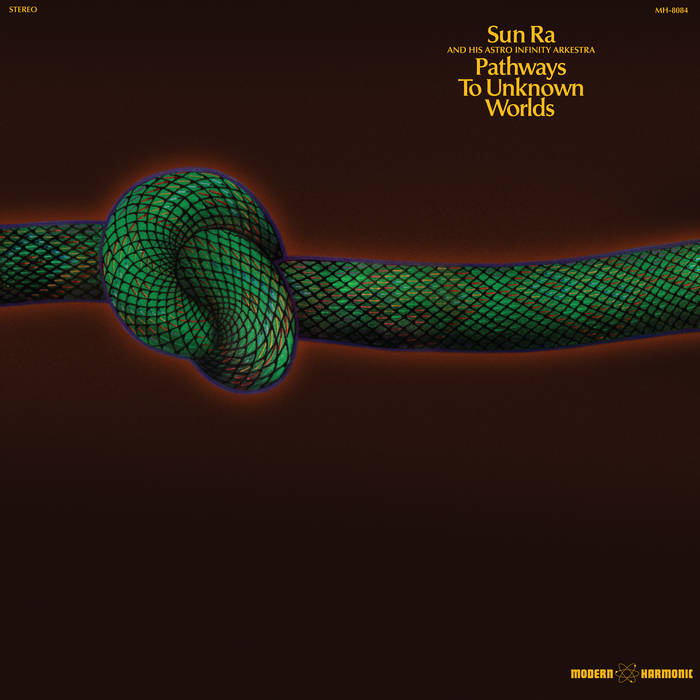 NOTE: Also available on LP and CD at modernharmonic.com

Pathways to Unknown Worlds was originally issued on LP in 1975 as part of Sun Ra's ill-fated and short-lived ABC/Impulse! Records partnership. ABC offered an ambitious deal that promised dozens of remastered editions of Sun Ra's Saturn back catalog along with a slew of new titles. The launch fizzled shortly after liftoff, but not before introducing two vital albums to the Ra catalog: Astro Black and Pathways. (Astro Black was reissued in all formats by Modern Harmonic in 2018.)

Ra’s original Pathways liner notes expressed his disdain for the past and his vision of the future. But the future here rendered by Ra seems more dystopian than utopian. Imagine this album as an aural Science Fiction novel, analogous to the contemporaneous writings of Philip K. Dick, Harlan Ellison, Samuel R. Delany, and others who dwelled in unknown worlds where confusion and chaos often reign. A cybernetical soundscape for time travel through an inscrutable cosmos.

Our travelogue opens with “Pathways To Unknown Worlds," as bass clarinet (Eloe Omoe), baritone sax (Danny Ray Thompson), and oboe (Ra mainstay Marshall Allen) slither about while percussion refracts below. Ra enters quietly, adding bell-toned sounds from a Yamaha YC-45D combo organ. This model, introduced in 1972, featured a pitch-bend ribbon controller which allowed the player, with a slide of the finger, to produce theremin or synthesizer sounds. The track also features Akh Tal Ebah on Space Dimension Mellophone (a mellophone with a contrabassoon reed) and trumpeter Kwame Hadi.

Bassist Ronnie Boykins provides the backbone for this track, improvising solo lines built around the keynote. The ensemble responds chaotically until Boykins’ bowed bass shrieks to a climax, his microphone collapsing and falling to the floor.

The complete version of “Extension Out” debuts here, including the opening five and a half minutes that were omitted from the 1975 LP. A 2000 CD reissue on Evidence included this section as a separate “Untitled” track, which faded out. The master tape used here contains the uninterrupted thirteen-minute performance. Danny Davis joins Marshall Allen in the opening salvo for a threatening alto sax duel, with Omoe’s bass clarinet and Ebah's trumpet agitating over multiple percussionists. Clifford Jarvis, one of the most powerful drummers ever to perform with the Arkestra, is the rhythmic bedrock on each track.

The LP closes with “Cosmo-Media,” in which Ra and Boykins lead off with intergalactic conversation. Tenor sax stalwart John Gilmore finally gets a wild showcase, as Hadi’s torrid trumpet flourishes. The work draws to a meditative close as Ra’s synth and Boykins’ bass flutter off to unknown worlds.

This Modern Harmonic edition has been remastered from the four-track session reel. The 1975 Impulse! LP was formatted as “Quad Compatible”—short for "quadraphonic"—which you could enjoy if you had four speakers, a custom quad cartridge/stylus, and a decoder integrated into your ’70s hi-fi. At the time, quad was "The Future of Sound." The Future flopped, as the music industry soon regressed to stereo—one channel for each ear.

An additional treat was discovered on the sessions reels: the brief yet compelling “View From A Mountain Top.” The track opens with a “Discipline”-styled scored eight-bar horn melody before Omoe and Gilmore skulk over Ra’s monotone organ. The track fades out quickly, implying there may be more on another as-yet unfound tape.

The two closing tracks on this remastered edition were previously released as Side B on the Of Mythic Worlds LP, issued in 1980 on the Philly Jazz label. The source of these tracks was uncertain, and Ra offered no clues. Decades later, these tracks were authoritatively determined to have originated at the Pathways sessions. The aptly titled “Intrinsic Energies” features Boykins propelling the track with a singular rhythmic charge over Ra’s organ patches, while Gilmore, followed by Allen, wails assertively throughout the central passages.

The supersonic dance party continues with “Of Mythic Worlds,” again driven by Boykins and a small army of percussionists. Gilmore’s somewhat placid entrance turns into a furious caterwaul, abetted by Allen, with Thompson on Neptunian Libflecto (a bassoon with a French Horn or saxophone mouthpiece), while Ra’s organ caroms about.

Recorded at Variety Recording Studios, New York City in early 1973, Pathways was the final Arkestra release from ABC/Impulse!. Ra’s ten ABC albums (eight reissues and two premieres) were dumped in cutout bins during the late ‘70s, while 15 contracted albums—nine Saturn reissues and six new titles—were canceled. Since 2000, five of those six have been issued, including The Cymbals/Symbols Sessions [MH-8083] and Crystal Spears [MH-8082] on Modern Harmonic. Despite this setback, Sun Ra—an artist who looked toward the future while occasionally reimagining his past—continued forging pathways to new and unknown worlds for two more decades.