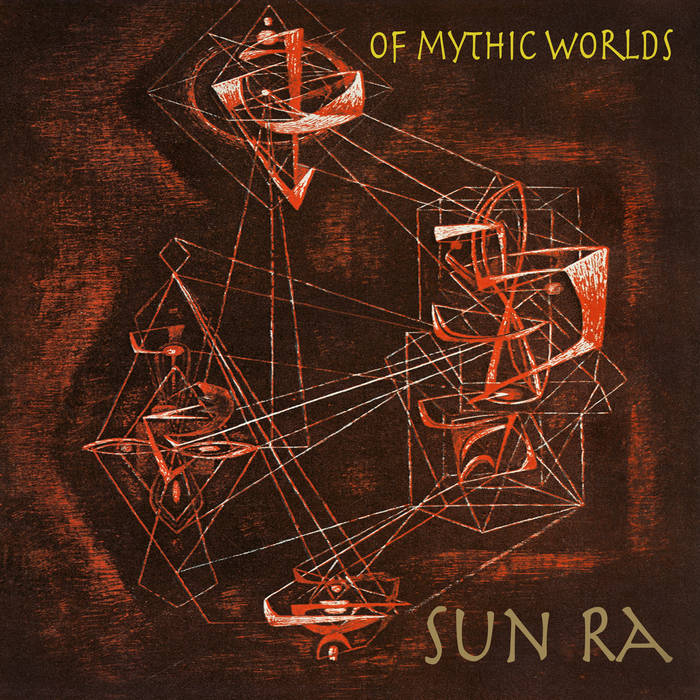 Of Mythic Worlds, containing five tracks (three on side A, two on side B), was first issued on LP in 1980 on the short-lived Philly Jazz label (PJ 1007), owned by Tom Buchler. The only other Sun Ra release on PJ was the widely acclaimed Lanquidity (1978). OMW was never issued on CD, the rights reverted to Sun Ra LLC in 2014, and this digital reworking is the first reissue. The album still contains five tracks, but they're not the same five tracks. In fact, the title track has been omitted. There's a reason for that.

Sun Ra often configured his albums from mismatched sources. Tracks could have originated from different sessions recorded years apart, in different studios, and featuring different bands. He would combine live and studio material; in some cases, the contents were recorded in different decades. (The 1973 album Deep Purple featured tracks from the early 1970s coupled with tracks from the late 1940s and mid-1950s!)

No recording dates were provided on the OMW LP sleeve, though "Recorded in Chicago" was written below the two titles on side B. Did that geographical citation apply to the side B tracks only, or to the entire album? Consider a third possibility — that it was typical Ra misdirection.

The discographic Earthly Recordings of Sun Ra (Robert L. Campbell and Christopher Trent, 2nd ed. 2000) says, "The proprietors of Philly Jazz knew nothing of the origins of the tape." Trent later wrote, "The album has the matrix numbers 9791A and 9791B. These presumably are the dates for the Philly Jazz transfer of the tapes and/or remastering. Previously these numbers misled us into thinking these might be recording dates." Rick Barry, of Philly Jazz, wrote to Ra scholar/friend Hartmut Geerken in June 1980, "I am afraid I don't know the personnel or the recording date of Of Mythic Worlds, and I'm not sure anybody does. Sun Ra was not certain of all the personnel."

By studying the performances on side A, eventually Campbell was able to identify the personnel. By tracking these musicians' tenures with the Arkestra and comparing personnel to known tour stops, it was determined that these three tracks — "Mayan Temples," "Over the Rainbow," and "Inside the Blues" — were probably recorded in April 1978 at The Left Bank Jazz Society in Baltimore. Portions of this concert were included in the 1980 Robert Mugge film "A Joyful Noise," which helped to identify personnel.

However, the tracks on side B—"Intrinsic Energies" and "Of Mythic Worlds"—were something of a mystery. They're not live—they're studio recordings. They sound unlike the contents of side A, with different personnel and instrumentation. In fact, they do not sound contemporaneous.

Enter Michael D. Anderson, of the Sun Ra Music Archive. Anderson insisted that the two tracks on side B were in fact unreleased tracks from the Pathways to Unknown Worlds sessions, which were recorded at Variety Studios in New York (in 1972, says Anderson, not '73, as indicated in Earthly Recordings). Pathways had been issued on Impulse in 1975 as part of an ill-fated 1973 licensing deal struck by Ra and manager Alton Abraham with ABC-Dunhill Records.

After reviewing the evidence (including personnel, instruments, and composing/arranging styles), Trent wrote in the 2014 Art Yard book Omniverse Sun Ra: "Re-evaluating [the tracks], they are indeed taken from a studio recording, not a rehearsal or live recording, and the sound and musical style of Sun Ra's electronics are compatible with the 1973 [sic] date."

Hence, these two tracks have been omitted from this digital reissue; they were reassigned to the 2019 Modern Harmonic label's definitive reissue of Pathways to Unknown Worlds (available in all formats).

In place of these two tracks, we have included two previously unreleased medleys performed by the Sun Ra Quartet at the Moers Music Festival, West Germany, in 1979. The recording quality is excellent (these originated from a radio broadcast), the performances are relatively close in the Ra chronology, and the repertoire is compatible with the three OMW live tracks. Part of the Moers performance was preserved on a 14-minute radio broadcast (there is a complete audience tape running 45 minutes), on which the personnel was announced. One additional title, a solo piano rendition of "Over the Rainbow," is available as a bonus track on our digital edition of the Ra solo piano album Aurora Borealis.

All tracks produced by Sun Ra

The Sun Ra Music Archive does not have master tapes of Of Mythic Worlds. We obtained transfers of Philly Jazz vinyl LPs from two different sources. The transfers had comparable audio quality and, in quieter sections, identical hum from the original pressing. The hum has been minimized in the restoration process.

Cover designed by I.C., adapted from a modified illustration which appeared in Missiles and Rockets magazine, June 6, 1960.