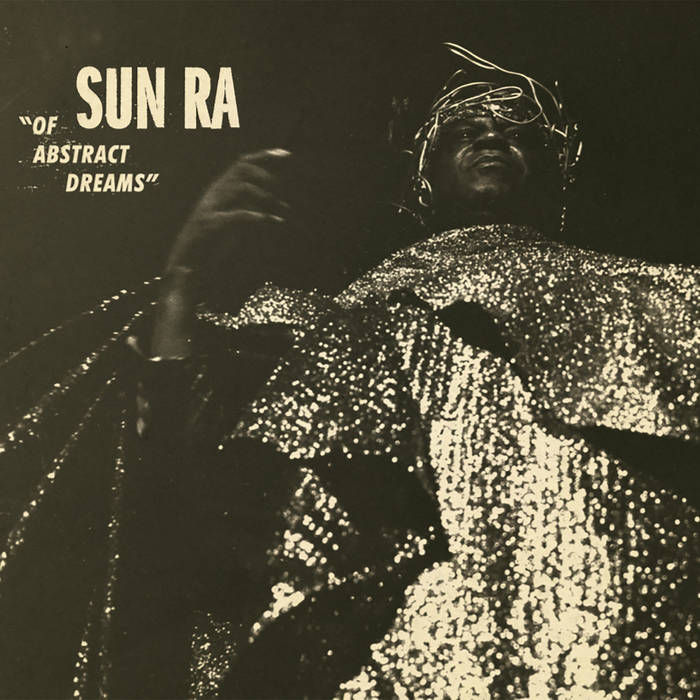 From the 1940s onward until his departure from planet Earth in 1993, Sun Ra assiduously documented his music. Between early 1972 and summer 1973, Ra and his Arkestra engaged in a spate of studio recording sessions in California, Chicago and Philadelphia, the results of which produced an extraordinary run of albums: 'Astro Black’, ‘Space Is The Place’, ‘Discipline 27-II', ‘Cymbals’, ‘Crystal Spears’, 'Pathways To Unknown Worlds’, ‘Friendly Love', one side of the 1978 LP ‘Of Mythic Worlds’ and the entire soundtrack to the film ‘Space Is The Place’.

1974 saw the Arkestra maintain a busy performing schedule across the USA while Ra also prepared a series of Saturn LPs featuring live concert material coupled with older studio recordings. Until now, the Saturn LP ‘The Antique Blacks’, recorded at radio station WXPN FM, represented the only studio recording to have been made between the second half of 1973 and the recording of the LP ‘Cosmos’ in France in August 1976.

In his efforts to continuously document his music, Sun Ra was always looking for new recording opportunities. Ra archivist Michael D. Anderson explains; “From 1974 through 1980, The Arkestra recorded a series of recordings in the WXPN studios. WXPN is on the campus of The University of Pennsylvania in Philadelphia. Then-station manager Jules Epstein and music director Russ Woessner were instrumental in the exposure and recording of The Arkestra. As an inexpensive means to record in Philadelphia, they offered Sunny the opportunity to record in the WXPN production studios. The station was also associated with concert entrepreneur Geno Barnhart, founder of The Empty Foxhole concert collective (1969-1982). Each weekend, WXPN broadcast and recorded concerts from The Foxhole. Sadly, in the 1990s, WXPN changed its format and discarded most of the master tapes in dumpsters outside the studio.”

‘Of Abstract Dreams’ preserves a single session from this seemingly lost legacy of recordings. As with many other Sun Ra recordings, there are no documented details, and all information has been gleaned through aural detective work by Michael D. Anderson (with Irwin Chusid of Sun Ra LLC) who unearthed the tape reel and surmised that this session took place in either 1974 or 1975.

Four tracks were recorded: two chants familiar from live performances, 'I’ll Wait For You’ and ‘Unmask The Batman’; one seldom heard title, ‘Island In The Sun’ and a spontaneous composition titled ‘New Dawn’. A small Arkestra is present, made up of then-residents of the Ra house in Morton Street, Philadelphia. Ra plays piano throughout, John Gilmore, Marshall Allen and Eloe Omoe are on reeds, Akh Tal Ebah plays trumpet and there are two dedicated percussionists, probably Eddie Thomas on kit and Atakatune on congas. Everyone adds vocals, handclaps or both. The mono recording, dry radio room sound and bass-less ensemble gives a low key feel and sound to the session. The fire and commitment to the Omniversal moment is always there but the emphasis is mostly on cyclic groove. The tracks show the group in a less declamatory and more discursive mode.

Prior to this release, ‘Island In The Sun’ had appeared just once in the vast Ra discography, on the Saturn LP ‘The Invisible Shield.' This recording shows the song’s close compositional kinship with Ra’s piece ‘Spontaneous Simplicity'. The groove and piano figures at the beginning of the track are essentially the same as those heard on its frequently played compositional cousin. However, the eight bars of distinctive melody, played at the start on Marshall Allen’s flute, signify this track as 'Island In The Sun’. The melody (heard in full AABA form at the track's conclusion) is one of Ra’s deceptively simple themes, sunny but with a melancholy edge. This version opens with a dark modal swing feel but builds to a vibrant and propulsive central section before once more becoming elusive and numinous toward the close.

‘New Dawn' rises with disquisitive piano and alto sax exclamations from Ra and Marshall Allen before Ra ushers in a brooding rhythmic groove. Eloe Omoe takes over the lead on a brief bass clarinet solo before John Gilmore delivers a searching but concise solo.

Ra sketches a new modal background riff for his own solo, spraying showers of high note runs, before Gilmore returns with the horns harmonizing Ra’s left hand. The music changes direction and heads for arrhythmic percussive space with Allen pushing the sonic extremes of the oboe. The track then fades quickly and without a decisive ending, suggesting an edit from a longer recording.

Ra demonstrates his deep affinity with and profound understanding of piano blues styles on ‘I'm Gonna Unmask The Batman’. Co-composed by Chicago blues performer Lacy Gibson and Alton Abraham, Sun Ra’s business partner in Saturn Records, it features Arkestra reedman and percussionist James Jacson on lead vocal utilizing a distinctive growl that sits somewhere between Louis Armstrong and Screamin’ Jay Hawkins. John Gilmore takes another great solo, mixing trenchant blues phrases with spiraling free runs. Ra makes up for the absence of a bass player on the session with constant roiling bass figures. His punchy right hand chords and the percussionists shore up the groove before the track concludes with a Ra-signaled space chord and the band heading skywards.

‘I’ll Wait For You' concludes the session in its first known studio recording as a fully-fledged composition. It had featured in Arkestra concerts for some years as a poetic recitation by Ra in tandem with singer and dancer June Tyson, but here it emerges as a fully formed piece with Afro-jazz overtones. Ominous piano trills herald more dark piano blues with drums and congas. Gilmore enters the space with another supercharged solo backed by the horns. Ra lays out, leaving Gilmore alone with the percussion. An Arkestral voice recites the Ra text followed by Ra himself, then joined by other voices while Gilmore continues his otherness blues. A burst of space sound with Akh Tal Ebah’s trumpet to the fore revitalizes the groove. Omoe overblows the bass clarinet, followed by more Gilmore in extreme multi-phonic territory. The Arkestra create a brief wall of sound before the track concludes with vocals, drums and congas.

For Sun Ra and the Arkestra, music was played not just to relay a message for humanity but also as an ongoing paean to ‘the creator of the universe’, every tone, sound and utterance of vital importance to the Omniverse. This session, unheard for over forty years since it was recorded, once more demonstrates the vitality of Ra and his master musicians and constitutes another important entry into what Ra called “music of the private library of God”.