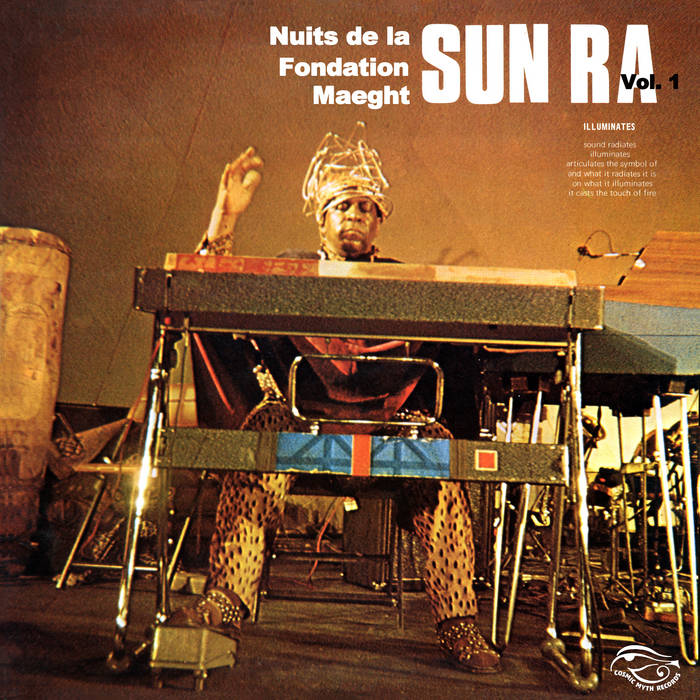 whyfisucks. Felt as if I was transported through time to the event in which this took place. Ra's energetic vortexes send my soul through space, continuously returning and departing in a timeless fashion. Favorite track: Shadow World.

By the late 1960s, Sun Ra & His Arkestra were gaining a reputation for staging multidimensional spectacles that could pack large venues. In particular, an April 1968 two-night multi-media Carnegie Hall debut, arranged by Willis Conover and his wife, had been wildly successful. As recounted by John Szwed in his Sun Ra biography Space Is The Place, "Conover had been urging Sun Ra to take the Arkestra to Europe for some time and assured him that … the time was right. So when an offer came for them to play a pair of concerts at the Fondation Maeght in the south of France, they began making preparations." Shows were booked for August 1970.

The Maeght Foundation is a modern art museum in southeast France, tucked away in the back country hills above Nice. Established by Marguerite and Aimé Maeght in 1964, it owns a fabulous collection of paintings, sculptures, collages, and ceramics (over 12,000 works) by countless 20th-century icons, including Arp, Matisse, Kandinsky, Dubuffet, Bonnard, Braque, Calder, Chagall, Giacometti, Léger and Miró. They also host music performances and other public events.

Ra's Fondation Maeght dates were not part of a tour. The Arkestra’s first European tour began on October 9, 1970, at Les Halles, in Paris. The Maeght gigs qualify as exploratory visits. Despite much controversy (see below), they were successful and led to the increased use of Ra's Earthly passport over the next two decades—to Europe and beyond.

Speaking of passports, Szwed offers the following vignette, based on Ra's customary (and factual, you understand) assertion that he was born on Saturn:

"When [the Arkestra] filled out the forms at the passport office in New York City, the clerk at the desk said to Sun Ra, 'Sir, you’re going to have to give us better information than this. We need your parents’ names, your birth date.' [Dancer] Verta Mae Grosvenor recalled that Sun Ra said, 'That *is* the correct information.’ After a few minutes the clerk went back to speak to her supervisor. Sun Ra was only wearing his day wear, but it was still pretty out! The supervisor was no-nonsense, but after talking to Sun Ra she said, ‘Sir, why don’t you come back in a few hours.’ When we came back there was another person there and he knew about it, and he said, ‘We’ll just give you the passport.’ It got so *out* that they just gave it to him!”

What Sun Ra and his entourage presented at Maeght startled patrons, critics, artists, and journalists. In short, most eyewitnesses didn't know what to make of it. Szwed chronicles the event nicely:

"Nineteen musicians and dancers were on the stage on the evening of August 3. The audience had little or no knowledge of Sun Ra’s music, since his records weren’t widely distributed in France, and when they arrived they saw the Arkestra spread out before them like elaborate decor: musicians in red tunics, seated in a forest of instruments on stage, dancers in red dresses. On a screen behind them was projected a sky full of stars, then planets, children in Harlem, Indians on hunting trips, and newsreel footage of protests; a ball of 'magic fire' rose slowly up to the ceiling; saxophonists began to battle like samurai, then came together like brothers; and in the still center of it all, Sun Ra sat behind the Moog, creating the sounds of gales, storms, and waves crashing. From the very first note, an agitated woman stood up and cried out, 'What is *this*?' Afterwards she came up and insisted on seeing the written music. Europeans seemed to want to know whether there was music behind what they were hearing, as if it would assure them that this was rational activity, and Sonny was always happy to show them the scores. A man once blurted out that his 'five-year-old daughter could play that!' Sun Ra readily agreed: 'She could play it, but could she write it?'"

The Maeght recordings were taped for broadcast by French state-sponsored radio, and filmed. Selections from the concerts were issued in 1971 as two separate LPs on the French label Shandar, and later reissued in various formats—some legitimate, some not.

The Arkestra returned to France in November for a concert at Theatre du Chatelet in Paris. Szwed quotes one disappointed jazz critic, Jean-Robert Masson, who—perhaps naively—noted a disconnect between what Ra presented live in 1970 and what he had recorded in 1965:

"I was perplexed listening to the records from [Fondation Maeght]: nothing was happening, so to speak. How could the same orchestra who had made the orchestrally rich [1965 'Heliocentric Worlds' records on ESP-Disk] be the same one who made the [Maeght] records, which were almost immobile, and which reduced itself to a crude and simple rhythmic event. I had to conclude that the gestural and visual element had a very large place in the spectacles of Sun Ra which wasn’t evident from listening to the ESP records. The evening at Chatelet just underlined this, going all the way to caricature."

Masson was hardly the first—or last—music critic to be "perplexed." Ra-ficionados might argue that such reactions were part of Ra's game plan. The word "compromise" cannot easily be used in the same sentence as "Sun Ra" without an intervening negative. As Ra himself noted in 1966: "A lot of people say that I’m just playing around, but it's not like that. I know music from head to tail, I know all the laws of music, I was reared up playing classics and I went to college and studied music for teacher’s training, so I KNOW music. But I’m just following my own way, and I know what I’m doing."

Recorded in concert on August 3, 4, and 5, 1970, at Saint Paul de Vence, France
Engineered by Claude Jauvert


Tapes of these performances are currently unavailable. Transfers from first edition vinyl and digital restoration by Irwin Chusid