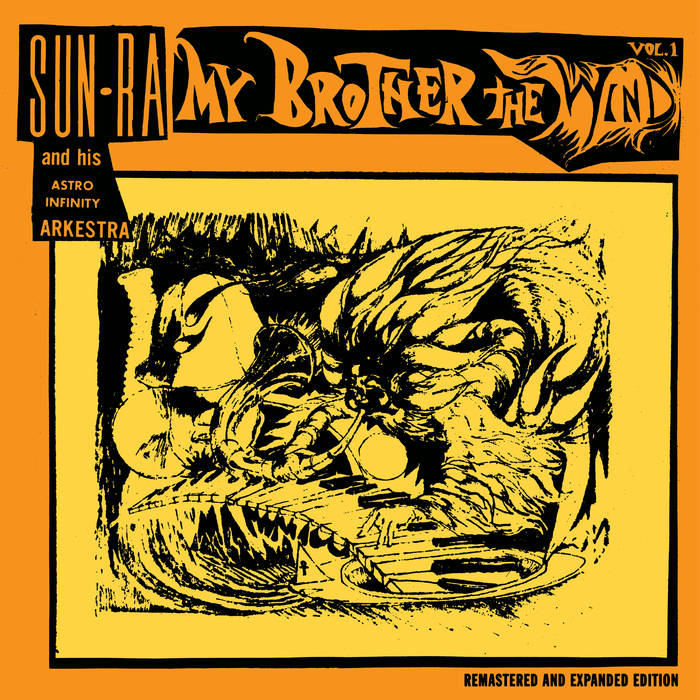 MY BROTHER THE WIND, released by Sun Ra in 1970 (but recorded in 1969) is one of several albums that showcase Sun Ra's initial reckonings with the then-recently introduced Moog synthesizer. Within a few years this chapter of Ra's legacy included My Brother the Wind Vol. 2, The Night of the Purple Moon, Space Probe, and The Solar-Myth Approach, Vol. 2. Although the Astro Infinity Arkestra is credited on most copies of the original LP sleeve for My Brother the Wind, in fact only three sidemen were on the session—Marshall Allen, John Gilmore, and Danny Davis, with Moog performance pioneer Gershon Kingsley serving as synth programmer and technical consultant.

Sun Ra was not seeking to reproduce existing music with the Moog; he saw the device (and electronic instruments generally) as futuristic, offering ear-opening—and galaxy-traversing—possibilities. In 1969 Apollo 11 had landed on the moon; Sun Ra made alternate travel arrangements. "I wasn't using any gasoline. I'm using sound," he explained (about his mythic Black Space Program). "You haven't reached that stage on this planet yet where you can use sound to run your ships and run your cars and heat your house. Your scientists haven't reached that yet. But it will happen. Where you can take a cassette and put it in your car and it will run it—with the right kind of music, of course. And it won't explode."

With the Arkestra Sunny could occasionally revisit and reinvent music of yesterday; the Moog was about tomorrow. This approach ran counter to the initial commercial trend of the instrument. During the late 1960s and early 1970s countless high-profile LPs featured Moog-based interpretations of everything from the Beatles to Bach to Bacharach. There were exceptions (e.g., Paul Bley, Caldera, Perrey & Kingsley, Beaver & Krause, even the Monkees), but the prevailing aesthetic was to apply this novel instrument to familiar melodies. Although such albums took minimal risk, they helped popularize the invention by adapting hits and standards, thus broadening the otherworldly Moog's appeal.

Sun Ra had broader horizons. Given access to a Moog modular system in 1969, he went into Kingsley's New York studio, punched the record button, and embarked on a sonic adventure. The resulting LP was entitled simply My Brother the Wind. There was no "Volume 1," a designation which was retroactively applied after Ra released "Volume 2" shortly thereafter. (Volume 2, which was not an all-Moog outing, contained several Moog solo tracks recorded at the R.A. Moog factory, in Trumansburg, New York, during Sun Ra's visit in summer 1970.)

The original My Brother the Wind LP on Saturn (catalog 521) featured four tracks, properly sequenced here on as tracks 1–4. For this expanded release, tracks 5–7 feature three complete session takes of "The Perfect Man." The third and final complete take was issued in 1974 on Side B of Saturn 45 rpm single ES 537, reissued in 1983 on Saturn 9/7474, and included on the Evidence 2-CD set The Singles in September 1996. The alternate takes have not been previously issued.

Track 8 features the monumental "Space Probe," a solo Moog work recorded around the same time—and possibly performed on a Minimoog. This track was originally released in 1974 on the Saturn LP Space Probe, which appeared in a number of hybrid configurations during the 1970s. On at least one iteration, taped to the generic back cover was a typewritten card which claimed "Space Probe," described as a "moog [sic] solo," had been "recorded in Chicago, 1960's"—a fanciful claim at best.

The LP and CD editions include liner notes by Moog historian Brian Kehew. Historical and technical liner notes are provided by noted jazz historian Ben Young, who restored and remastered the album with his Triple Point Records partner Joe Lizzi. Both men have been recognized for their production work on HOLY GHOST, the Grammy-nominated ALBERT AYLER boxed set released on John Fahey’s Revenant Records in 2005.