Monorails and Satellites Vols. 1, 2 and 3 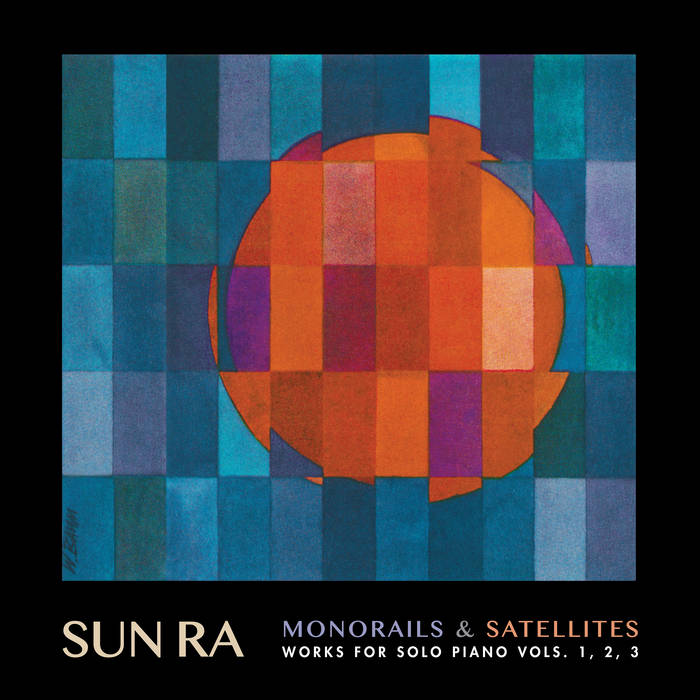 Raymond Stewart Sun Ra is the one artist whose had the most influence on me as a music listener. No one else even comes close. The Arkestra will teach you that music is so much more than anything you previously thought it was. They open doors within that change your perception of music and inspire a deep curiosity for new and abstract/atonal or otherwise avant-garde music. It's a rollercoaster leading to a rainbow

Ulrich Jonas I loved the original lp. Here's more of the same quality.

"I have always thought orchestra. I play that way, even when playing the piano." — Sun Ra

Monorails and Satellites were two volumes of solo piano works recorded by Sun Ra in 1966. Volume 1 was issued on his Saturn label in 1968, volume 2 the following year. They were the first commercial LPs of the artist's solo keyboard excursions. Vol. 1 featured seven idiosyncratic Sun Ra originals and one standard delivered in Sunny's singular manner. Vol. 2 consists entirely of original compositions. A tape of a third, unreleased volume was discovered by Michael D. Anderson of the Sun Ra Music Archive. Released here for the first time, it consists of five originals and four standards, and was recorded in stereo.

Despite Sun Ra's obsession with the future, Monorails and Satellites is something of a nostalgia trip. As a youth in Birmingham, Alabama, the man who became Sun Ra—Herman Poole Blount—spent hours at the Forbes Piano Company, amusing himself (as well as staff and customers) at the showroom keyboards. He practiced standards, emulated his piano heroes, played the latest pop songs, and improvised. The idyllic reveries which the teen experienced in those formative years were no doubt recaptured during the Monorails sessions.

The playing here speaks less of a style, and more of a collection of statements. Some of the tunes, with their odd juxtapositions of mood, could be mistaken for silent film scores. Perhaps they were audio notebooks, a way to generate ideas which could be developed with the band ("I think orchestra"). Regardless of any secondary (and admittedly speculative) intent, they serve as compelling standalone works. The fingering reflects Sun Ra's encyclopedic knowledge of piano history as his passages veer from stride to swing, from barrelhouse to post-bop, from march to Cecil Taylor-esque free flights, with a bit of soothing "candelabra" swank thrown in. Sunny's attack is mercurial, his themes unpredictable. His hands can be primitive or playful, then abruptly turn sensitive and elegant. As with the whole of Sun Ra's recorded legacy, you get everything but consistency and predictability.

The listener also experiences something rare in the Sun Ra recorded omniverse: intimacy. His albums, generally populated by the rotating Arkestral cast, are raucous affairs. With the Monorails sessions, we eavesdrop on private moments: the artist, alone with his piano. These are brief audio snapshots of what was surely a substantial part of Sun Ra's life, infinitesimal surviving scraps of 100,000 hours similarly spent, most lost to posterity.

The 2-CD and 3-LP packages of this set include an essay by three-time Down Beat Artist of the Year VIJAY IYER, along with a historical chronicle by jazz authority BEN YOUNG.

Volumes 1 and 2 originally issued on Saturn Records in the late 1960s. Volume 3 previously unissued on LP and CD (three tracks were previously available on a since-deleted digital edition).

Produced for reissue by Michael D. Anderson and Irwin Chusid

Tape transfers (volumes 1 and 3) by Joe Lizzi and Michael D. Anderson of the Sun Ra Music Archive
Tape for Vol. 2 could not be located. The album was digitally restored from a pristine Saturn vinyl copy by Irwin Chusid and Joe Lizzi