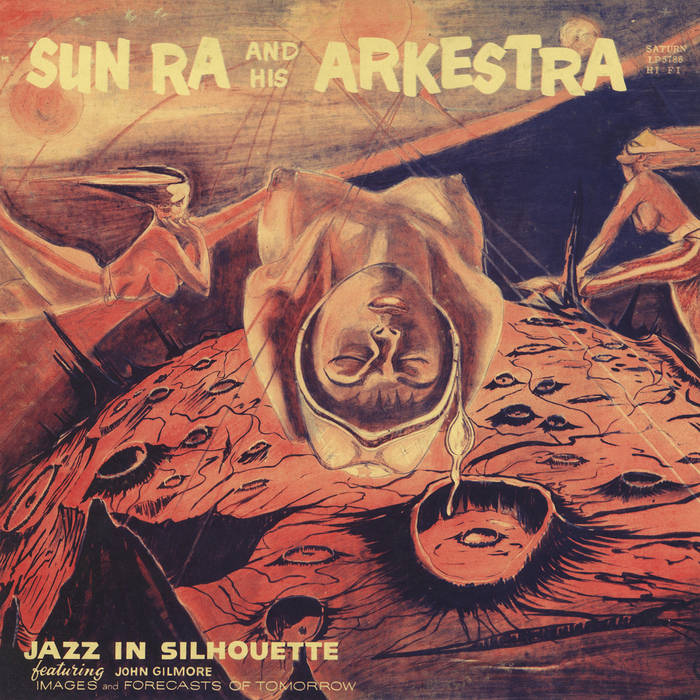 embouchure The stereo mixes are a revelation. Michael D. Anderson brings us a priceless gift: the Arkestra in hi-fi. Favorite track: Enlightment (Stereo).

"In tomorrow's world, men will not need artificial instruments such as jets and space ships. In the world of tomorrow, the new man will 'think' the place he wants to go, then his mind will take him there."
— Jazz in Silhouette 1959 album notes

If you want the most essential record reflecting Sun Ra's Chicago period during the 1950s, THIS IS IT. Recorded in Chicago in 1958 or 1959, Jazz In Silhouette essentially closes Sun Ra's bebop/hard-bop periods, as his interstellar traveler persona began to vividly evolve in the early 1960s. Once he moved to New York in 1961, he began to explore more adventurous musical terrain.

Jazz In Silhouette opens with the Ra composition “Enlightment” (which also appears on the album Sound Sun Pleasure, which wasn't issued until 1970; all tracks from both albums were recorded at the same sessions). “Enlightment” would remain a staple in Arkestra concerts for the rest of Sunny's life. “Saturn,” “Velvet,” “Horoscope,” “Images (In A Mirror),” and “Blues At Midnight” showcase tenor saxophonist John Gilmore and the rest of the band taking straightforward, but inventive hard-bop solos. "Horoscope" is credited to pianist Mary Lou Williams (a big influence on Sunny), from her 1945 “Zodiac Suite.” On the album closer, an extended “Blues At Midnight,” each horn soloist stretches out as in a live club performance.

On Jazz in Silhouette, Sun Ra and the band radiate the period's Chicago jazz sound, with lilting melodies, intertwining chords, and surprising dynamic shifts. Sunny's compositions demonstrate his ability to write memorable songs in the jazz tradition. As evidenced by the arrangements, at this point in his career Sunny is already somewhat "out there," but it wasn't until he reached New York that he became completely untethered.

This remastered edition of Jazz in Silhouette, prepared for the Sun-tennial in 2014, includes the premiere release of four tracks in full stereo. Every prior edition of the album was 100% monophonic. One stereo session tape was discovered by Michael D. Anderson of the Sun Ra Music Archive; the album's second stereo reel, unfortunately, is damaged and cannot be reproduced.

Additional session notes on Jazz in Silhouette from The Earthly Recordings of Sun Ra, by Robert L. Campbell and Christopher Trent (2nd ed., 2000):

Nate Pryor (who was supposed to be on this session but arrived too late) recalls that the studio was located off the Outer Drive, somewhere near Grand Avenue. Alton Abraham has said that RCA Victor Studios and a studio with a name like “Balladine” were used for Saturn sessions. Bill Fielder says Bo Bailey was on this session, not Julian Priester as stated on the Impulse issue. (The incorrect listing could have come about because Bo Bailey “wasn’t straight with the Union,” as Nate Pryor says). Thanks to Allan Chase for recognizing the role of the mouthpieces in “Ancient Aeithopia.” In the first edition of this discography, Sunny was credited with playing his Wurlitzer electric piano on the introduction to “Ancient Aethiopia,” but more careful listening suggests that he was emulating his Wurlitzer style on a regular piano! The wordless vocal during this same piece includes John Gilmore and Ronnie Boykins, but the most prominent voice belongs to another Arkestra member.