by Sun Ra & His Arkestra with Salah Ragab 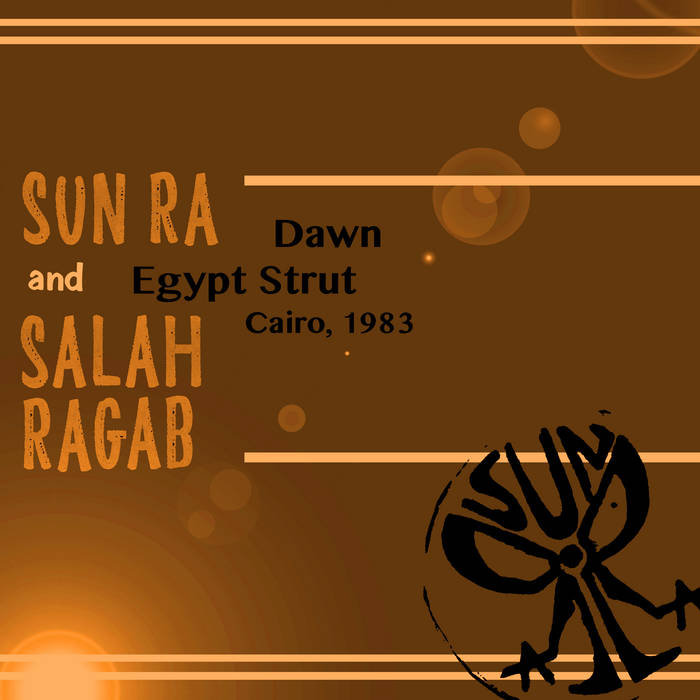 Drummer/composer/bandleader Salah Ragab (ca. 1936–2008) was a pivotal figure in Middle Eastern jazz. He is considered by many authorities to be the founder of Egyptian jazz, having formed his first ensembles in the 1960s. Sun Ra's friendship and musical interplay with Ragab began in 1971 on the Arkestra's first visit to Egypt. (See remembrance by Hartmut Geerken below.) Ra issued a number of albums from recordings made on that tour, including Live in Egypt Volume I (a.k.a. Dark Myth Equation Visitation, a.k.a. Nature's God); Nidhamu (a.k.a. Live in Egypt Vol. II); and Horizon (a.k.a. Starwatchers, a.k.a. Live in Egypt Vol. III).

Ragab composed "Egypt Strut" and "Dawn" and accompanied the Arkestra on congas for this May 1983 studio session, which was recorded at El Nahar Studio, Heliopolis, Cairo, on Sun Ra's second tour of Egypt. These two stellar tracks were issued that year by the Greece-based Praxis label on a hybrid album that coupled these two Ra-Ragab collaborations with three early 1970s recordings by Ragab (without Sun Ra) leading the Cairo Jazz Band and an unnamed quintet.

The five Praxis tracks were later reissued by the UK-based Leo label in 1999. The '99 package added two tracks: a 1971 recording of "Music for Angela Davis" (comp. Hartmut Geerken) by the Cairo Free Jazz Ensemble (conducted by Geerken), and a third Ra-Ragab track: a live-in-Cairo 1984 version of "Watusa," a decades-old staple in Sunny's repertoire. A freewheeling 18-minute tour-de-force, this "Watusa" nonetheless constitutes one of the worst audio captures of a Sun Ra performance ever commercially issued (Transparency-grade atrocious). You had to be there. It is not here.

Due to the somewhat mismatched programming of the Praxis and Leo albums, as well as their limited circulation, "Egypt Strut" and "Dawn" may have been overlooked by many Ra fans. We've coupled them here into an essential digital EP so these tracks can receive the focus they deserve. "Egypt Strut" might fittingly be subtitled "Egyptian Sidewinder," as certain passages echo Lee Morgan's 1964 classic, with a Middle Eastern flavor. "Dawn" is a perfect crossover collaboration that highlights how Ra's and Ragab's styles overlap and where they diverge.

Art Yard Records proprietor Peter Dennett, who has been toiling for years to preserve Salah Ragab's artistic legacy, issued a superb set of 1968–1973 recordings by Ragab and the Cairo Jazz Band. It is available on Bandcamp at: salahragab.bandcamp.com/album/egyptian-jazz.

"In June 1971, I sent an invitation to Sun Ra from Cairo and six months later the Arkestra came to the land of the pharaohs to play at the foot of the pyramids. When they played in my living room in Heliopolis on December 12, 1971, Salah Ragab was one of my guests. It was their first personal contact.

"Sun Ra set out again 12 years later to gaze into the eyes of Sphinx. In May 1983 he went into El Nahar Studio in Heliopolis with Salah Ragab to record two Ragab compositions. To my knowledge it had never happened before that Sun Ra and his Arkestra played compositions of a contemporary musician from outside [the band]. Maybe he was taken with the initials of Salah Ragab-which were the same as his own-or he was fascinated with the fact that his own name was part of Ragab's. To my knowledge, Salah was the only non Afro-American, apart from Leah Ananda from Kashmir and Roger Aralamon Hazoumè from Dahomey, to be documented on record with Sun Ra.

"In 1984 Sun Ra came to Egypt for the third time. For this last visit Salah played drums in the Arkestra when the band played at the small Jazz club Il Capo in Zamalek."

From The Earthly Recordings of Sun Ra (by Robert L. Campbell and Christopher Trent, 2nd edition, 2000):

"According to Hartmut Geerken, the entire [1971 Sun Ra and his Astro Intergalactic Infinity Arkestra in Cairo] concert (3-1/2 hours) was taped by [Arkestra drummer/engineer] Tommy Hunter; it is not known whether additional material survives. All of the band's instruments (except Ra's synthesizer) had been impounded by Egyptian customs and consequently instruments had to be borrowed from the Egyptian Army (courtesy of Salah Ragab). The Tiger organ was obtained locally as a substitute for Ra's Farfisa or Spacemaster. Clifford Jarvis used Geerken's elaborate percussion set during the concert."

Recorded at El Nahar Studio, Heliopolis, Cairo, May 1983
Annotation and cover design by Irwin Chusid
Special thanks to Peter Dennett and Hartmut Geerken