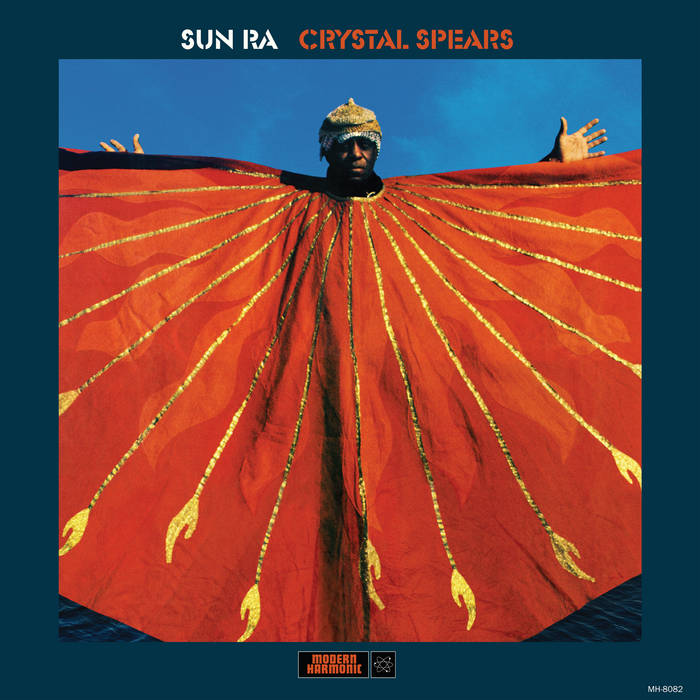 Jagged spears of crystal thrust into the brain (or is it the heart?) elicit an agonizing howl, a cry, and a scream. Thus opens Sun Ra’s 1973 adventure-mystery Crystal Spears. After a few minutes of a cathartic brawl between Minimoog and Yamaha combo organ, percussionists Atakatune and Odun enter while drummer Clifford Jarvis provides tonal textures, not rhythm, from the kit. Marshall Allen saunters in with a rather plaintive oboe, under which Ra later overdubbed (a rarity on an Arkestra recording!) a marimba. But this momentary gentleness is soon disrupted by roaring electronic keyboards over waves of rollicking marimba devilishly chattering below the fray.

Crystal Spears, intended for release in 1975 by ABC/Impulse! and assigned catalog # AS-9297, was ultimately rejected by the label. Ra and business manager Alton Abraham retained the rights, rechristened the album Crystal Clear and assigned Saturn Records catalog # 562—but never got around to issuing it. The first three tracks on this album were mastered from that tape, a 1/4-inch four-track (15 IPS) brand favored by home recording enthusiasts—and generally disfavored by pro engineers. The sessions took place at Variety Recording Studio in New York on February 3, 1973, a month before the Ark returned on March 8 to record another Impulse-rejected album, Cymbals/Symbols (also available in a remastered edition from Modern Harmonic).

Why was Crystal Spears rejected? A year or two after Ra’s signing, reigning ABC management was swept out and new execs rolled in. It’s quite probable that the new execs didn’t comprehend what was happening on these recordings. For the uninitiated, this was not jazz as they knew it, but unbridled cacophony. But is it? Sun Ra always had a method to his madness—and a madness to his method.

Most of the Ra projects on Impulse! were reissues of Saturn-label releases which had been poorly distributed (and pressed in limited quantities). In 1972-73, Ra reportedly produced eight newly recorded projects for Impulse!—two were released at the time, and five have been issued since 2000. Ra’s “guided improvisations” often showcased his extraterrestrial takes on the blues as well as “chamber jazz,” a classical/jazz hybrid popularized by 1950’s Hollywood composers such as Leith Stevens, Fred Katz, and Robert Markowitz for crime jazz. It’s a good bet that Ra was as fascinated by these cinematic sounds as he was with the Exotica of Les Baxter. (Fans of the latter should explore Modern Harmonic's double album of Sun Ra Exotica.)

The core of the Arkestra played together daily, enduring endless hours in rehearsal and more onstage; by 1973, some had played with Ra for over 15 years. This forged a musical telepathy that helped this music coalesce. Since the mid-1960’s, their group improvisations deployed deep layers that blossomed over repeated listening.

Track two, “The Eternal Sphynx,” is probably the most commercial sounding work. Stylistically related to the “Discipline” series of compositions Ra crafted in the early 1970’s, the ensemble plays a repetitive two-bar vamp, in which soloists Danny Davis (alto) and John Gilmore (tenor) and Ra (who slinks into “Space Is The Place”) commune. The band returns to the motif before building up to a Space Chord finale, upon which Ra overlays a minor/major-7th chord, that irrefutable “sound of intrigue” heard from Peter Gunn to 007.

Cinematic suspense permeates “The Embassy of the Living God,” who apparently resides in a haunted mansion. There’s an eerie majesty to Ra’s chordal voicings. Eloe Omoe’s bass clarinet and Marshall Allen’s oboe add an otherworldliness with their howlings, until the entire group retreats into the shadows as Gilmore’s hellacious wails materialize. Ra’s starburst organ runs and (probably) Kwame Hadi’s trumpet herald the propulsive finish of the track, which ends sharply and conclusively.

“Sunrise In The Western Sky” opens with various gongs, some overdubbed, announcing the rising of the sun in the east. This is a more languid composition, reflecting its title. By its denouement, the sun is out in full force, its fury scorching the planet. The drums soon abate, their work for the day done. But will the need for sunset bring them back to evoke the gods again? In Sun Ra’s aural cinematheque, one has to await the sequel that may never arrive to learn the answers one may never know.