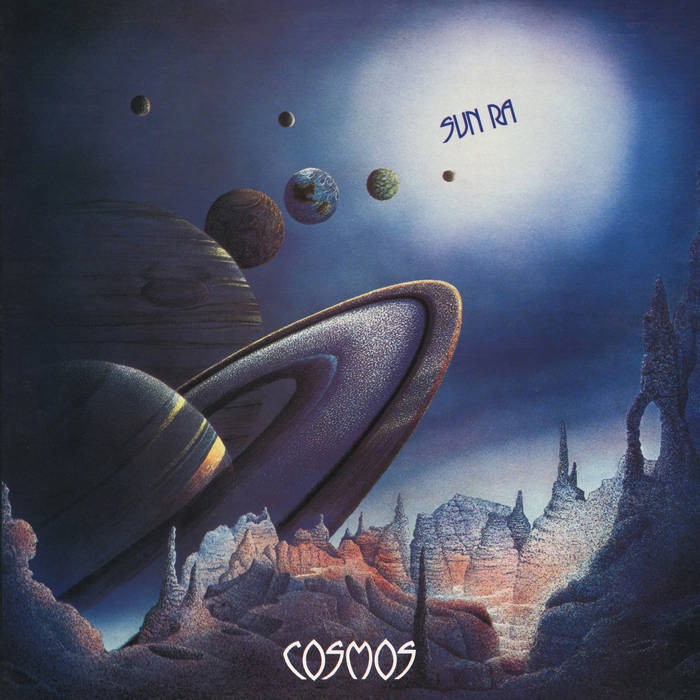 COSMOS contains the only studio recordings captured in summer 1976 during the fourth European tour of Sun Ra and His Arkestra. Live recordings are known to exist from concerts in Switzerland, Italy, and France.

Cosmos was issued in France in '76 on Cobra (identified as Blue Silver on the sleeve and label), in the US that same year on Inner City, in 1991 on Buda (France), and as a bootleg edition or two. Each time it resurfaced, the audio quality changed, sometimes for the better, sometimes not. On the 1991 CD, the bass was mixed at woofer-quaking levels; the Inner City LP sounds flat.

In 2015, tape librarian/engineer Michael D. Anderson of the Sun Ra Music Archive began assembling a digital reissue. Tape could only be located for tracks 2, 3, and 4, and the various LP and CD configurations offered idiosyncratic production variants. Eventually, best quality recordings were extracted from a combination of sources: track 1 from the Inner City CD, and tracks 5, 6, and 7 from a near-mint Cobra LP. These were digitally remastered in several stages, to create an improvement over prior editions.

Though the full Arkestra was resident in Paris for two months, the lineup on Cosmos is a stripped-down dozen, reportedly due to a cramped recording facility. Three tracks ("Neo Project No. 2," "Cosmos," and Journey Among the Stars") exist on this album and nowhere else; "Jazz from an Unknown Planet" was performed on the '76 tour, but is an otherwise neglected work. "Interstellar Low Ways," "Moonship Journey," and "The Mystery of Two" re-enter the repertoire at unpredictable intervals.

The presence of the ROCKSICHORD—a slightly cheesy electronic harpsichord popular in the late 1960s with psychedelic bands and some avant-garde composers—links Cosmos with Ra's 1970 album NIGHT OF THE PURPLE MOON. Though six years apart, they are in some ways companion albums (and in some ways, not). Like Purple Moon, Cosmos features a more accessible side of Ra, a mix of relatively earthbound ensemble jazz and pan-galactic excursions. It's a more structured set than many offered by Ra during the decade, although it does not lack for adventure.