by The Sensational Guitars of Dan and Dale 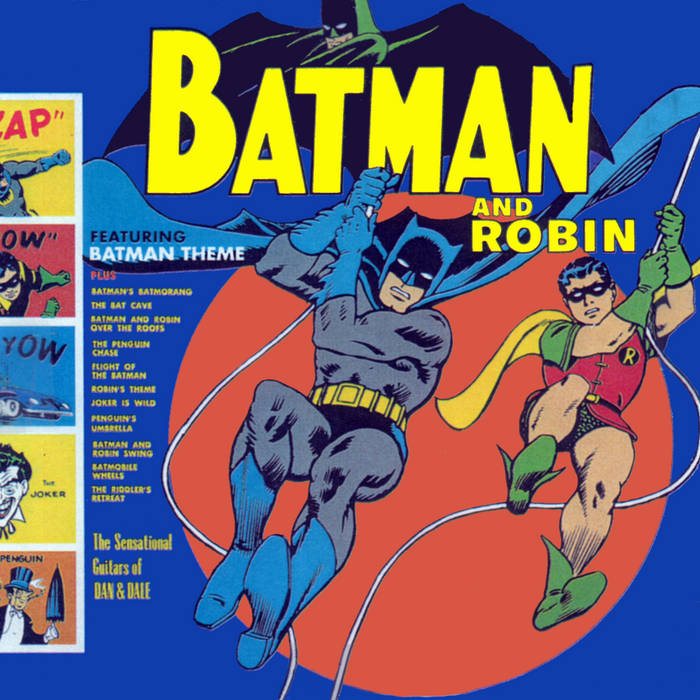 This is not a Sun Ra album, nor does it sound like a Sun Ra album—but Sun Ra and various members of his Arkestra are on it. This 1966 budget-label project was an attempt by producer Tom Wilson (1931–1978) to cash in on the Batman craze launched by the popular superhero comic book-turned-campy TV series.

"The Sensational Guitars of Dan and Dale" were not a real group—it was a marquee name for a rotating cast of session pros earning rent money by playing on hastily recorded albums intended to turn quick bucks on various musical and cultural fashions. There are at least 20 "Dan & Dale" albums listed at Discogs, most issued on the Diplomat label. To the best of anyone's knowledge, there were no musicians named Dan or Dale involved. In fact, few, if any, musicians have been identified from any D&D projects—"Batman" being a notable exception, and for good reason.

Wilson had produced Sun Ra's first LP, Jazz by Sun Ra, in 1957 for Wilson's short-lived (but legendary) Cambridge-based Transition label. After Ra relocated from Chicago to New York in 1961, Wilson contacted Sunny, booked him in a Newark NJ studio, and produced The Futuristic Sounds of Sun Ra, issued in 1962 on Savoy.

The Batman project occurred after Wilson's resignation from a staff producer position at Columbia Records, where he helmed albums by Bob Dylan, Simon & Garfunkel, Eddie Harris, Herbie Mann, and others. By 1966, Wilson had begun selling his services to the highest bidder as a freelancer, and produced many historic projects for MGM-Verve, including the first two albums by the Mothers of Invention, the first two Velvet Underground releases, and albums by Nico, Hugh Masekela, Eric Burdon and the Animals, and others. (More info: www.ProducerTomWilson.com )

Despite the Batman album's notoriety among Ra collectors and cognoscenti, Sun Ra was not originally slated to play on it. His involvement was purely circumstantial.

Wilson had invited members of The Blues Project to play on the session. According to the band's keyboardist, Al Kooper, the group wasn't told in advance about the "Batman" theme—they were just hired to show up, play, and get paid. Blues Project guitarists Danny Kalb and Steve Katz, bassist Andy Kulberg, and drummer Roy Blumenfeld turned up. But Kooper declined. The gig coincided with his father's 50th birthday party, which Kooper didn't want to miss. So Wilson had to find an organist to replace Kooper.

Kooper has long been listed as having performed on this album. But he ain't on it. I interviewed him several times in 2017 and he was insistent about this. Furthermore, Kooper says he never met Sun Ra.

As for the music, it's fun, but hardly groundbreaking. The Earthly Recordings of Sun Ra, by Robert L. Campbell and Christopher Trent, offers this critical assessment: "Except for the Batman theme, nearly all of the music on this album was plundered from various sources. 'Batman’s Batmorang' uses the slow movement of Tchaikovsky’s Fifth Symphony; 'Penguin’s Umbrella' takes over Chopin’s A-flat Polonaise; 'Batman and Robin Swing' is based on the love theme from Tchaikovsky’s Romeo and Juliet; and 'Batmobile Wheels' makes do with Bach’s Minuet in G, already recycled as ['A Lover's Concerto'] by the Toys. 'The Riddler’s Retreat' lifts its guitar licks from 'She Loves You' by the Beatles."

This album has been bootlegged countless times over the decades. As long as we're cataloging Sun Ra's discography on Bandcamp, we figured we'd offer a Batman bootleg too. We claim no rights in the recordings or the compositions. In Sun Ra's monumental catalog, the Batman album is a mere footnote.