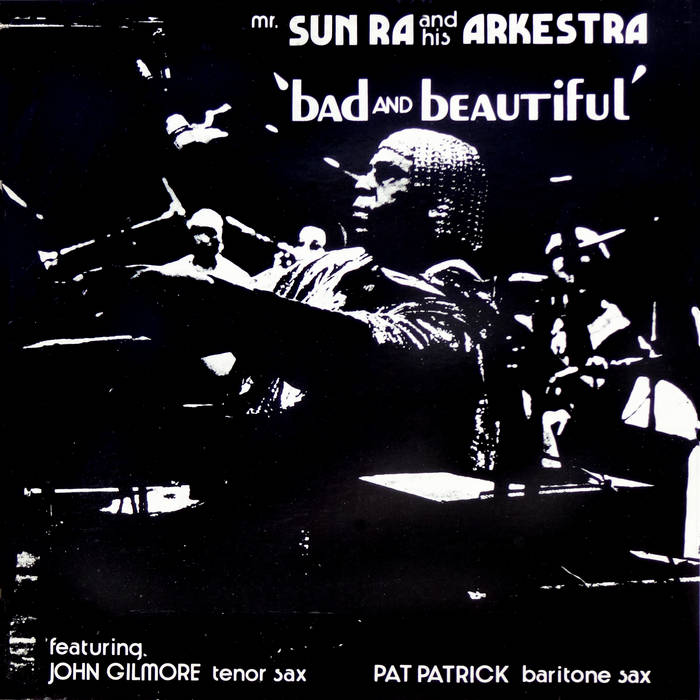 The Bad and Beautiful was the first album recorded in New York by Sun Ra after he arrived from Chicago with a small contingent of the Arkestra in 1961. Its release was delayed for 11 years, finally appearing on Sunny's Saturn label in 1972. The album consists of four Sun Ra originals and three standards recorded by a sextet consisting of the leader on piano, accompanied by mainstays John Gilmore, Pat Patrick, Marshall Allen, Ronnie Boykins, and Tommy Hunter.

The album finds the band at a transitional stage between the "hard space bop" of their Chicago days and the avant-garde direction Sunny's music would take in the 1960s. A superficial listen would seem to indicate the repertoire and style were retrospective, yet it's evident from countless flourishes in the arranging and performing that a group of brash newcomers had arrived on the Gotham scene. Despite a string of late 1960s Saturn LP pressings of recordings made in Chicago from 1956 to 1961, upon their arrival on the east coast Sunny and his ensemble began progressing beyond what passed for "polite" jazz. New York changed Sunny irrevocably by inspiring and challenging him. He didn't just find himself in a new city; he began exploring the deeper cosmos.

In many ways, Bad and Beautiful is a resume. It lays out what Sunny had learned as a pianist, composer, bandleader, and arranger during his Chicago years (and earlier growing up in Birmingham). It also presents the Arkestra as a tight-knit, yet relaxed ensemble, a team of professionals who play to each others' strengths with mutual respect. The album seems to say: This is who we are, this is what we did, we hope you like it, but don't expect us to continue in this fashion.

Then there's the issue of sonic quality. Bad and Beautiful sounds like it was recorded in a basement. In fact, it was: at the Choreographer's Workshop, 414 West 51st Street, which was the Arkestra's rehearsal space for several years after they arrived in NYC. The album's title thus acquires secondary implications: under bad conditions, beautiful music can be made. There's a genre called "garage rock." This is "garage jazz."

Two years after its delayed 1972 release, Bad and Beautiful was reissued with a lavish gatefold cover as part of a planned series of Saturn reissues and new recordings Sun Ra would make for the prestigious Impulse! jazz label. (That deal fell apart in two years, and a number of scheduled reissues and new projects were abandoned.) The Impulse! LP included the following technical note: "Many of the early Saturn recordings were recorded under less than optimum circumstances, and listeners are advised that certain portions of this album do not reach the standards of state-of-the-art recordings of the mid-1970s." That said, Impulse! proceeded to "fix" this admittedly "less than optimum" recording by mixing the monophonic tapes into fake "stereo" (attempting to replicate what had been lamentably done on the Saturn LP). Highs were boosted on one channel, lows on the other, producing a disorienting balance in which the left channel was noticeably inferior to the right. In addition, the tape was marred by sporadic flutter and dropouts, the tape speed ran slow, and the prevailing analog format made it difficult to remove transient noise while retaining the glorious lo-fi racket captured at the Choreographer's Workshop in 1961.

On this digital reissue we have retained the monophonic format. Working from the original tapes, we repaired a number of audio flaws and removed a scintilla of tape hiss, while retaining the raw energy captured by a historic band making great music in a less-than-ideal environment. These recordings aren't perfect. They will never be perfect. Trying to perfect them might inadvertently remove a layer of soul.

This remastered edition includes a previously unreleased session track, "Street of Dreams," featuring Pat Patrick showcased on baritone sax in a quartet setting. It appears here as track four, as found in sequence on the tape.

All titles composed by Sun Ra © Enterplanetary Koncepts (BMI), except:
"The Bad and the Beautiful" by David Raksin and Dory Previn
"Just in Time" by Betty Comden, Adolph Green, and Jule Styne
"Street of Dreams" by Victor Young and Sam Lewis
"And This is My Beloved" by Robert Wright and George Forrest