A Fireside Chat with Lucifer 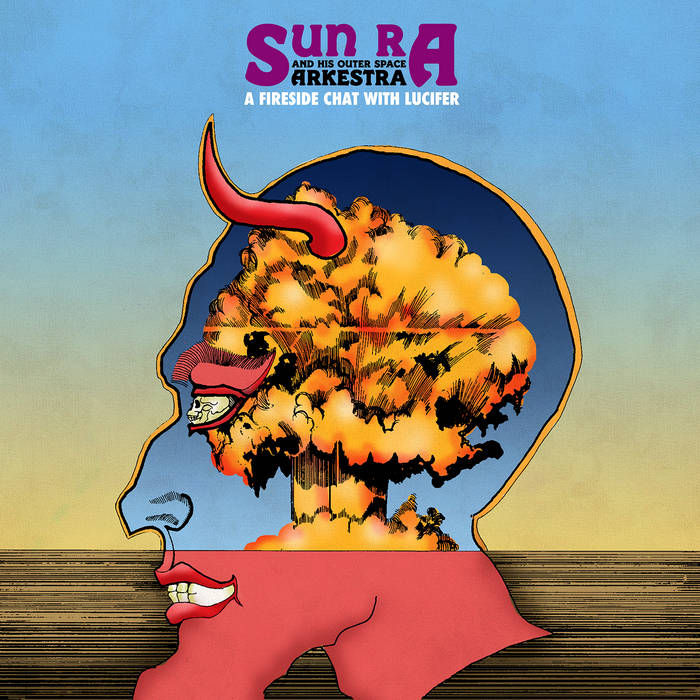 A Fireside Chat with Lucifer was issued by Sun Ra in 1983 (Saturn Gemini 19841). Like many Sun Ra albums, Fireside Chat offered stylistic random shuffle, as was the artist's intent, reflecting his eclectic, seemingly irreconcilable approach to compositional extremes. With Sun Ra you get everything except consistency and predictability. Side B consisted of the inscrutable 21-minute title track, while Side A consisted of three unrelated, shorter works (the wryly apocalyptic "Nuclear War," a languid, atmospheric ballad titled "Retrospect," and the soul groove "Makeup"). Fireside Chat was pressed in limited quantities, with hand-made Xeroxed covers (sans personnel or credits), and sold at concerts. Original copies are incredibly rare.

Though a resident of Philadelphia since 1968, Ra frequently booked sessions in New York at Variety Recording Studios, under the supervision of owners (and his friends) Fred Vargas and Warren Smith. The association began in the 1960s, and countless Sun Ra dates were captured on Variety's soundboard. Fireside Chat, recorded in September 1982, was one of the final extended Arkestra sessions at Variety; except for three tracks recorded there with Phil Alvin in 1985, it would be six years before Sun Ra again made extensive use of Variety. In 1988 he recorded the Disney tune "Pink Elephants on Parade," as well as the album Blue Delight (A&M)—and that was it. The bulk of Sun Ra's recorded legacy during the 1980s was captured live in clubs and concert halls. (An as-yet unreleased, but recently mixed, 1986 session at Boston's Mission Control studios is an exception.)

Sun Ra biographer John Szwed wrote that Fireside's title track "sustains a lyrical edge in spite of an open framework and textures which encourage sonorities to surface and emerge from the band as if there was no human intention behind them. Ra's organ playing here was built less on bombast and sonic terror than it is on whispers, stutters, shivers, and swells." Spiritual implications aside, the title might secondarily have been an inside joke: in the early 1950s, while coaching vocal groups in Chicago, the pre-Sun Ra Sonny Blount insisted that his young protégés call him "Lucifer."

Thomas Stanley, in his ambiguously titled 2014 book, The Execution of Sun Ra, observes, "Throughout his life [Sun Ra] was consistent in his opposition to war and his art reflected this, perhaps most sharply in the space chant 'Nuclear War.' 'It's a motherfucker, don't you know,' Sun Ra and trombonist Tyrone Hill [joined by June Tyson] sing over a deceptively sparkly chromatic piano line played at a steady walking rhythm. It is worth noting that this spicy chunk of language is the only use of profanity that this author is aware of in Sonny's vast recorded song repertory." Indeed, the vocal and instrumental arrangements on "Nuclear War" are so matter-of-fact, so devoid of urgency, a listener unaware that it was a Sun Ra composition could be forgiven for thinking it was a parody of a punk rock anthem. "Nuclear War" is Punk Jazz.

The side A Fireside tracks, along with other recordings from this 1982 session, subsequently appeared on the albums Nuclear War and Celestial Love (although "Fireside Chat" appeared on neither).

No personnel were listed on the original Fireside Chat with Lucifer LP. The following musicians are cited in Robert Campbell and Christopher Trent's The Earthly Recordings of Sun Ra (2nd ed.) as having participated in the sessions that produced tracks for the albums Fireside Chat, Nuclear War and Celestial Love: